Japan to restrict nightlife even after lifting COVID emergency

Suga says testing of people with no symptoms to expand to 5,000 a day TOKYO -- Japanese Prime Minister Yoshihide Suga confirmed Thursday that the government will lift the coronavirus state of emergency in Tokyo and three surrounding prefectures on Sunday, although restrictions on hard-hit restaurants and bars will remain in place.

In a news conference, Suga said that weeks of restrictions had brought new infections under control and led to a fall in hospitalization, with more hospital beds becoming available. He stressed that his administration would continue to take measures to prevent any surge in cases even after the removal of the emergency status, calling on the public to rally behind government guidance.

Suga said the number of new cases is "flat or slightly increasing." Despite concerns over flare-ups as restrictions are relaxed, he said he was "preparing" the country to hold the Tokyo Olympics and Paralympics over the summer.

Coronavirus tests for people with no symptoms, now conducted at major train stations and other busy urban spots, will be expanded to 5,000 people a day next month, the prime minister said. 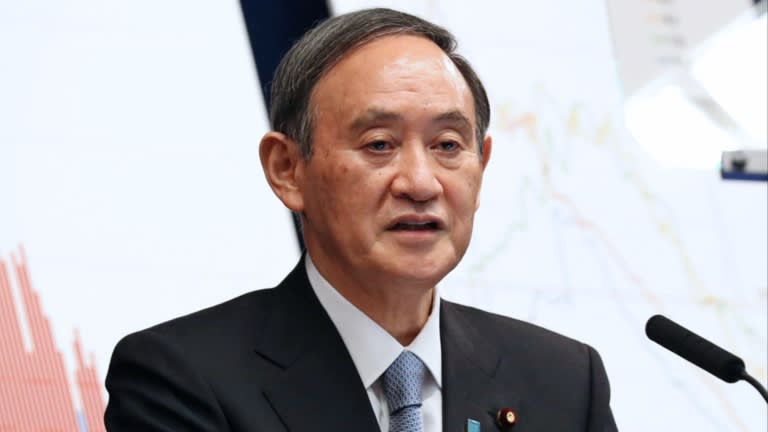 Prime Minister Yoshihide Suga said Thursday his focus was on virus management and that he had "no idea" about the dissolution of the house of representatives ahead of October.（Photo by Uichioro Kasai)

He also said that the vaccination of medical workers, a prioritized group, is proceeding smoothly, and about 80,000 people a day are being inoculated now.

When pressed by the media on Thursday, Suga, whose popularity had suffered over the last few months over his handling of the pandemic, seemed wary of triggering an early general election before October when lower house lawmakers' term expires, saying that his priority was containing the coronavirus.

There had been speculation that he would dissolve the House of Representative, but this was shelved for the state of emergency declared in January.

"I have absolutely no thought of dissolving the house after my travels to the U.S.," Suga said.

Suga also said on Thursday he would like to deepen his relationship of trust with U.S. President Biden and further strengthen the Japan-U. S. alliance during his visit to Washington in the first half of April. The prime minister has been vaccinated ahead of that trip.

Suga said that the country needed to be vigilant about virus mutations, for which he wants to expand testing. He emphasized the message for young people, saying that 60% of cases that cannot be traced are within this demographic. "We were not getting the message across well enough to young people. I want to make sure that happens," he said.