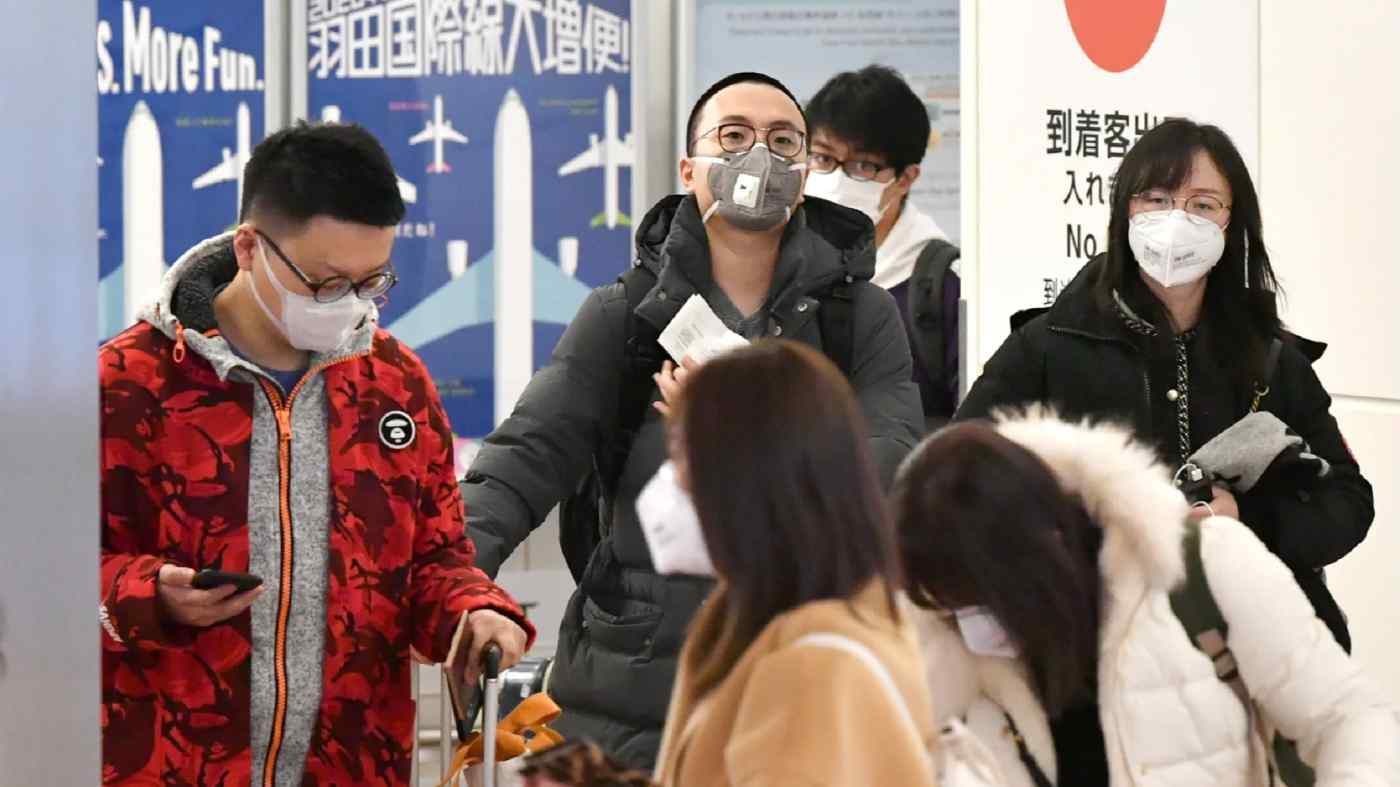 Tourists from China arrive at Japan's Narita Airport. Many visitors from that country have canceled travel plans due to the spread of the virus. (Photo by Kai Fujii)
MASASHI ISAWA, Nikkei staff writerJanuary 28, 2020 07:18 JST | China
CopyCopied

TOKYO -- China's response to the coronavirus outbreak is reverberating through Japan's services sector, as a ban on tour groups from China leaves in the lurch hotels and retailers that had been counting on the Lunar New Year travel rush.

Japan has been the most popular destination for Chinese travelers over this year's holiday break, according to China's Trip.com Group.

The country welcomed 650,000 Chinese visitors in February 2019, which included the Lunar New Year, data from Japan's Immigration Services Agency shows. The tourism ministry had estimated that about 2,000 flights, with a total of 400,000 seats, and 15 cruise ships capable of holding 35,000 people were due to enter Japan over the week through Thursday.

But the tour group ban has touched off a wave of cancellations of hotel reservations and leisure activities. Cruises with a total of 5,660 passengers due this week into the ports of Yokohama and Hakata, located on the main southern island of Kyushu, have been suspended.

If Japan experiences a drop in tourism on a par with the outbreak of SARS in 2002 and 2003, it will take a 776 billion yen ($7.1 billion) hit to GDP this year, Takahide Kiuchi, executive economist at the Nomura Research Institute, predicted in a report Monday.

The impact of the disease, formally known as severe acute respiratory syndrome, was relatively short-lived, lasting a few months. Should the new coronavirus cause a similarly steep decline in visitors for a full year, the drag would increase to 2.48 trillion yen, lopping 0.45% off Japanese GDP, Kiuchi wrote.

Hotels have felt the impact. The Jozankei Hotel in Sapporo had received cancellations for 250 guests from Chinese travel agencies by midday Monday. Cancellations at another well-established hotel are expected to rise to over a thousand by mid-February. "There are more tourists from greater China during the Lunar New Year than in the Sapporo Snow Festival," says a hotel executive. "So it's a big pain."

At the Rihga Royal Hotel Osaka, reservations for 144 rooms in group tours were canceled for the period from Saturday through the end of February. The Westin Miyako Hotel Kyoto, run by Kintetsu Group Holdings, says that two to three group trips from China, each with about 20 to 30 people, have been canceled.

The downturn will also be felt in tourist spending at shops. According to Yodobashi Camera, a consumer electronics retailer, "The number of customers is about 70% that of the previous year according to our sales staff." The company serves many group tours from China, and is concerned that sales may decline.