Japan's state of emergency to combat the coronavirus, initially scheduled to be lifted on May 31, will be maintained in metropolitan Tokyo for now. (Photo by Masayuki Terazawa)
AKANE OKUTSU, Nikkei staff writerMay 21, 2020 18:10 JSTUpdated on May 21, 2020 19:07 JST | Japan
CopyCopied

TOKYO -- Japan's Prime Minister Shinzo Abe confirmed Thursday that the state of emergency remains in place for metropolitan Tokyo and Hokkaido, while that status will now be lifted for Osaka, Kyoto and Hyogo prefectures.

The government and an expert panel made the decision based on whether the number of new weekly cases fell to a benchmark of 0.5 per 100,000 residents, among other factors, such as medical care capacity and testing capacity.

Tokyo and the neighboring prefectures of Kanagawa, Saitama and Chiba are considered a single area. Based on a Nikkei estimate, Tokyo's number of weekly cases per 100,000 residents was above the benchmark, at 0.56, while it was 1.08 in Kanagawa as of Wednesday night.

While the tentative end date for the state of emergency is set for May 31, the government expert panel plans to review the status next Monday for the five prefectures. "If the current [improving] situation continues, lifting could be possible," Abe said at a news conference later on Thursday.

Tokyo reported 11 new novel coronavirus cases in Tokyo on Thursday. The number of new confirmed cases in the capital has been under 20 for seven straight days. Tokyo is one of the world's most populous cities and has been under a state of emergency since April 7, while the rest of the world has started to reopen.

Business activity has been restricted under the state of emergency. Residents have been asked to stay home, although the public appears to be taking a lax attitude in some areas due to the prolonged restrictions. There are no legal sanctions for going out.

The number of cases in Tokyo and the death toll remain significantly lower than in many other cities. Japan's number of deaths per 100,000 people is 0.61, lower than other Group of Seven countries, such as the U.S. the U.K. and Germany.

Experts are still debating why infections in Japan and some other Asian countries are less common than in the U.S. and much of Europe. 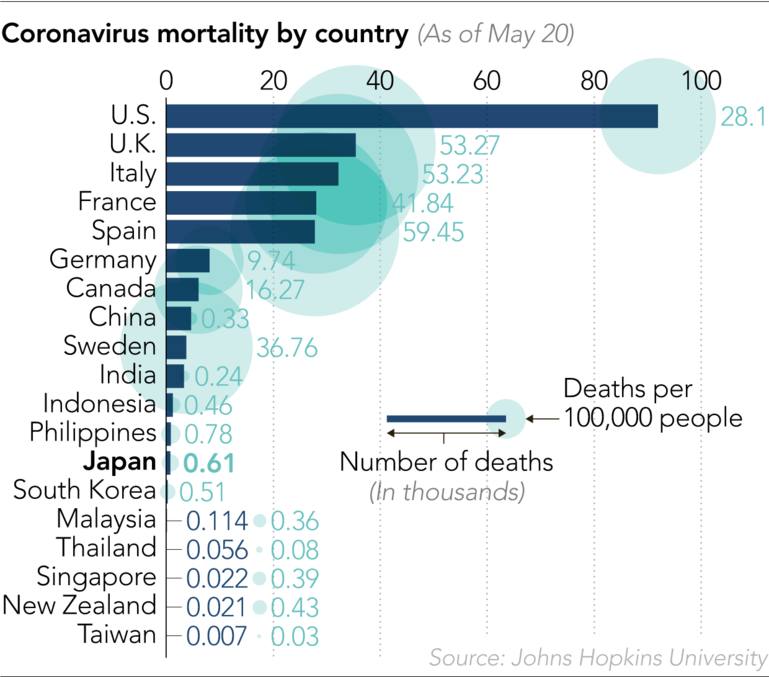 "The main SARS-CoV-2 virus circulating in Japan, as in most of East Asia, was the less-virulent B-type strain," said Andy Crump, a consultant at the Medical Governance Research Institute in a recent commentary.

Government panel member Shigeru Omi suggested at a news conference that this may be because of the country's high-quality health care system, initial strategy of tracking "cluster" infections and high public health literacy. Others have suggested unproven theories, such as that the Bacille Calmette-Guerin vaccination for tuberculosis have raised Japanese people's immunity to the virus.

The expert team advising the Japanese government notes that Japan's decisions should be based stricter standards compared with other countries, some of which saw new outbreaks after previously slowing the spread of the infection.