Japanese startups rush to develop service robots for medical use TOKYO -- Service robots are finally emerging from the shadows around the world as the pandemic drives demand for avoiding the coronavirus and its carriers.

Robots have long toiled behind the scenes to enhance efficiency in factories and elsewhere. But now, they have been thrust into the spotlight as reliable partners to keep people safe amid the public health crisis.

Transportation, disinfection and other work is increasingly handled by service robots to help reduce human contact and support creaking medical care systems in many countries.

These machines replace workers and have grown even smarter with artificial intelligence. The global service robot market has the potential to be worth a total of 4 trillion yen (about $37 billion) within the next several years.

Companies in the U.S., China, Japan and elsewhere are rushing to commercialize service robots. The key to success amid increasingly tough competition is whether they can launch new products quickly in response to market needs.

One area that is fast becoming mainstream is contactless deliveries.

In early April, Venezia's, a pizzeria in the U.S. state of Arizona which, like other local restaurants, has been struggling with measures to prevent the spread of COVID-19, took on some new help.

They came in the form of 11 small delivery robots produced by U.S. startup Starship Technologies. Pizzas placed on the covered pallets of the unmanned vehicles are delivered to households in the neighborhood.

But with the arrival of the delivery robots, Venezia's deliveries have been upgraded to "contactless" ones, said a manager at the pizzeria. The contactless delivery service is gaining popularity among customers.

Starship Technologies said that demand for contactless deliveries had increased sharply over the past few weeks.

The company's robots have also been used in Washington, the U.S. capital, for deliveries from food stores, and in the southern part of the state of California for the delivery of tapioca milk tea since late March. 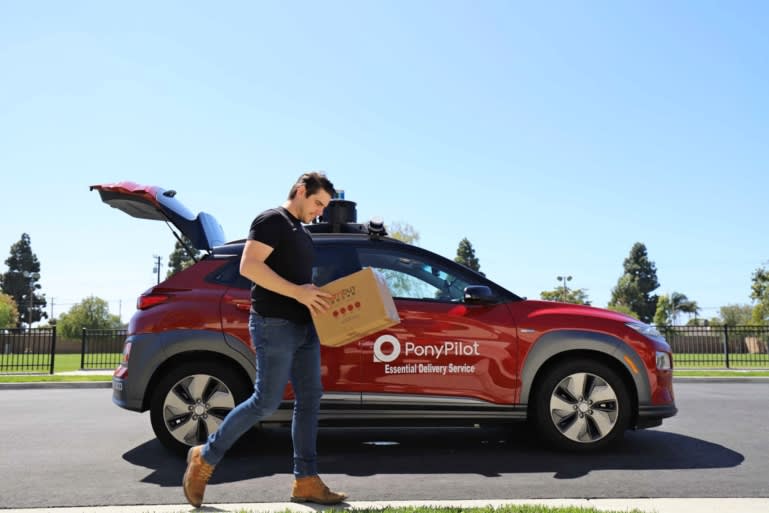 Chinese startup Pony.ai is set to start food delivery services using self-driving cars in California. A total of 10 driverless cars will be used to deliver food to customers’ doorsteps. (Photo courtesy of Pony.ai)

In the U.S. and elsewhere, there are serious efforts to make use of self-driving technology for the "last one mile" delivery of packages to consumers' homes, with extra impetus now to prevent new virus infections.

Moves to replace human workers with robots are spreading in various parts of the world amid growing demand for contactless services. One important example is disinfection work being carried out by security robots in buildings where people gather, to prevent infection through contact or droplets.

Mira Robotics is a robot developer based in Kawasaki City, Kanagawa Prefecture, near Tokyo, whose "ugo" service device has robotic arms and can be operated remotely.

Since March, the company has received five new coronavirus-related inquiries from potential clients at home and abroad. CEO Ken Matsui said they were "receiving inquiries from France, Singapore and elsewhere about whether our product can be used for sterilization."

Matsui said, "We are proceeding with development work to make [the robot] cope with disinfection work." The company plans to begin preparations for mass production, manufacturing 10 ugo robots during fiscal 2020, which began on April 1.

Based on location information obtained from its cameras and sensors, the security robot can spray disinfectant on railings and other places while patrolling indoors.

ZMP hastily commercialized the robot, equipping it with the disinfectant-spraying function, in response to a customer request.

But it is China that appears to be taking the lead in the increasingly fierce competition to provide service robots amid the pandemic, with robot development already advanced in the country before the outbreak.

Since the outbreak began, moves to operate service robots to support the medical care system have spread rapidly across the country.

For example, in Wuhan, where the outbreak began, self-driving robots have become more frequently used instead of humans at hospitals to deliver meals to isolation wards and to disinfect them.

A hospital in Shenzhen has completely switched to AI-equipped robots to check visitors' temperatures and offer reception services.

The robots were developed by Shenzhen-based UBTECH Robotics. They use cameras and sensors to recognize the faces of patients at the reception desk and instantly measure their skin temperature.

A spokesperson for the company said, "They can take 200 people's temperatures a day through image recognition technology. They have reduced the burden on medical staff amid a serious labor shortage."

The use of drones to deliver medical supplies has also begun.

Antwork, which is headquartered in Hangzhou in Zhejiang province, transported testing kits by drone between hospitals in the city of Shaoxing in February.

According to the company, the use of drones is suitable for the delivery of light-weight and more urgent packages and significantly cuts delivery times compared with transportation using ordinary roads.

Antwork also supports postal services using drones in sparsely populated areas, such as mountainous regions. At the end of 2019, the company also acquired a license from Chinese authorities to fly drones in urban areas.

The movement of testing kits by drone in Shaoxing was the first time the company had commercialized its drone delivery service in an urban area. Traditionally, robots have been operated mainly by trained personnel in closed spaces such as factories. In recent years, robots using AI began to appear, including service robots to complement human workers in places such as hospitals, stations, offices and restaurants.

AI robots that fill a useful role during the coronavirus crisis are likely to become more familiar in society and will come to be used more widely. With less human workers available due to lockdowns and illness, it is likely that there will be a growing demand for service robots.

Fuji Keizai, a Tokyo-based market research firm, forecast before the coronavirus outbreak that the global market for service robots would expand about 2.6 times between 2018 and 2025, reaching about 4.5 trillion yen. The market will be driven by robots used in logistics and conveyance. Automated guided vehicles, which are used in warehouses, are also likely to see growing demand from online retailers.

Demand for delivery robots is also expected to grow, with Boston Consulting Group estimating there will be a shortage of about 240,000 truck drivers in Japan by 2027 as many aging drivers retire. Strong demand is also expected for robots that can carry items and save on human labor in restaurants and hospitals.

A major challenge to the increased use of service AI robots is their high cost. Property developer Mori Trust is considering using such robots to make up for Japan's labor shortage, but robots using self-driving technology cost more than 1 million yen each, according to sources familiar with the matter. Uncertainty over the return on investment of robots has been a barrier to their spread.

In the meantime, there are good opportunities for companies that can get their service robots on the market quickly to meet consumer demand.

While, for now, the industry in China appears to have the edge, with robots being mass-produced at lower cost, companies in Japan and the US are also fully in the game.