Kawasaki disease and the coronavirus: six things to know 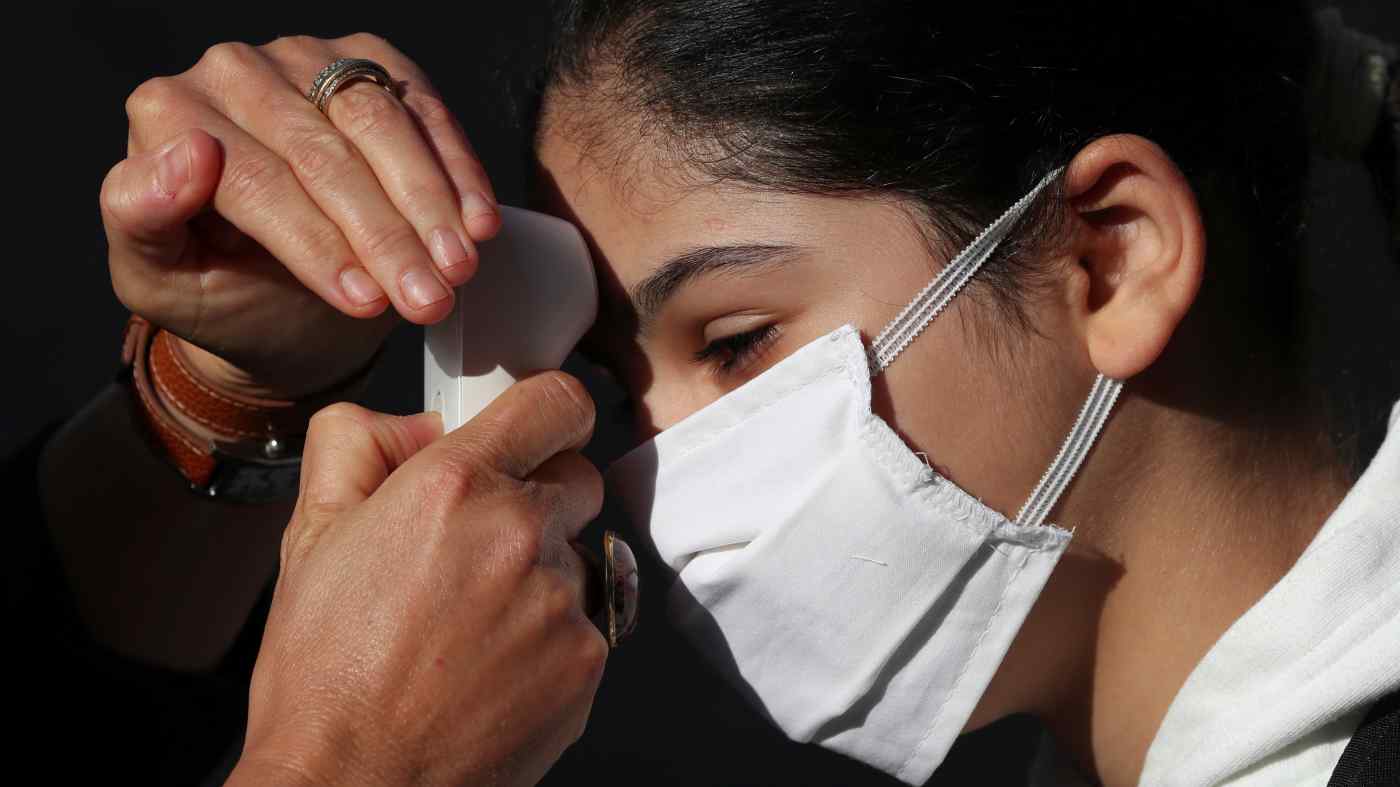 A girl has her temperature checked before entering school in Belgium. Doctors around the world are on alert for symptoms similar to those associated with Kawasaki disease.   © Reuters
MITSURU OBE and MARRIAN ZHOU, Nikkei staff writersMay 21, 2020 11:57 JST | Japan
CopyCopied

TOKYO/NEW YORK -- One of the top priorities in the fight against the coronavirus is to understand how, exactly, the pathogen attacks and kills.

The virus enters through the respiratory system. But it has also been found to cause complications in other parts of the body, such as the heart and kidneys, after it makes its way through the blood stream.

Is the new syndrome actually Kawasaki disease? Is there a cure? Here are six things to know.

What is Kawasaki disease?

Kawasaki disease is an acute inflammatory illness that affects blood vessels throughout the body. Children under age 5 are considered the most at risk, and it is more common in Asia and among individuals of Asian ancestry. The cause is unknown.

Cardiac aneurysms are the most dangerous complication. Basically, swelling within the coronary arteries causes blockages that can lead to heart failure.

Symptoms include fever, bloodshot eyes, red lips, red tongue, skin rash, swelling and redness of the hands and feet, and swelling of the lymph nodes.

How did the disease get its name?

Kawasaki disease was first described by a doctor in Japan named Tomisaku Kawasaki.

A pediatrician at a Red Cross hospital, he encountered his first case in 1961 and published a detailed report on 50 cases in 1967. It was "a masterpiece of descriptive clinical writing ... part Sherlock Holmes and part Charles Dickens," said Jane Burns, a pediatrics professor at the University of California, San Diego.

The first case reported outside Japan was in Hawaii in 1976.

What's the connection to COVID-19?

The Lancet, a prominent British medical journal, published observations of the Kawasaki disease-like syndrome in connection with the coronavirus this month. According to the report, an Italian hospital began to see an increase in symptoms reminiscent of Kawasaki in February, prompting doctors there to suspect a link with the explosive coronavirus outbreak.

The "coronavirus family might represent one of the triggers of Kawasaki disease ... being a particularly virulent strain able to elicit a powerful immune response in the host," the doctors wrote.

Inflammation is a normal immune response to foreign substances, but excessive reactions can harm the body.

The doctors cautioned that it is too early to conclude that the new syndrome is, in fact, Kawasaki disease. They note that it has affected significantly older children than the disease normally would, and that the patients have shown resistance to intravenous immunoglobulin (IVIG) therapy -- a well-known cure.

They also stressed that the syndrome remains rare, "affecting no more than one in 1,000 children exposed to SARS-CoV-2" -- the virus that causes COVID-19.

Some doctors refer to the phenomenon as pediatric multi-system inflammatory syndrome (PMIS) associated with COVID-19. "Some children might have a short period of fever and mild symptoms such as a sore throat or rash; others may have more prolonged fevers and/or more severe symptoms affecting their blood pressure or heart," explained Dr. Vandana Madhavan, medical director of the MassGeneral Hospital for Children infectious disease program.

"There may have been a known recent COVID-19 infection, but in some children, the infection is only confirmed during evaluation of PMIS or never identified," Madhavan added. "PMIS may occur up to several weeks after the initial infection."

How widespread, geographically, is this syndrome?

The state of New York is currently investigating at least 110 reported cases of school-aged children experiencing Kawasaki-like symptoms possibly due to coronavirus.

The U.K. has seen an increase in previously healthy children displaying severe inflammatory symptoms, according to a Centers for Disease Control health alert. It remains unknown whether the illness is specific to children or can also affect adults.

The Japanese Society of Kawasaki Disease, meanwhile, said it has "not yet found" information in Japan or neighboring countries that shows a connection between the virus and Kawasaki disease.

Though Madhavan said PMIS cases are increasing in "multiple countries," she emphasized that the number "remains low compared to the overall number of COVID-19 infections, and the incidence of very severe complications remains even lower."

How is the new syndrome treated?

Kawasaki disease itself is not considered a difficult illness. Early discovery and treatment usually allow patients to go on to lead a normal life.

As for the new syndrome, early evaluation by a pediatrician is vital, said James Schneider, chief of pediatric critical care medicine at U.S. health care provider Northwell Health. Fever can be treated with acetaminophen, but parents should contact health care professionals if the fever lasts more than a few days.

"We are using treatments known to be effective for Kawasaki disease -- IVIG, aspirin, steroids," he said. "We sometimes have used other immune modulators such as anakinra," he said, referring to a drug used to treat arthritis. "Most kids need ICU care with blood pressure support by medications and some needing oxygen or mechanical ventilation."

What else are experts saying about it?

Although this inflammatory illness has not yet become a major problem in the pandemic, Schneider said it is a reminder that "children are not immune to SARS-CoV-2 infection and that the infection can lead to other complications."

Ko Ichihashi, pediatrics professor at Jichi Medical University's Saitama Medical Center, noted that complications, such as the Kawasaki disease-like syndrome, are often late to show up because it takes time for the virus to spread in the body through the blood system.

"This means that a coronavirus-infected patient can experience a sudden deterioration in their condition after showing only minor symptoms in the early stage of infection," Ichihashi warned.