BANGKOK -- COVID-19 has rattled Laos' debut in selling a U.S. dollar bond in international markets, adding pressure on a country whose "Wild West of dam building" splurge has put it in a precarious repayment situation, especially in regard to China, its leading lender.

Sources familiar with the banking system in Laos, one of Southeast Asia's poorest countries, say the government has adopted a "wait and see" stance before proceeding with the bond sale. "The central bank has still to confirm if the bond sale will go ahead this year," one source said.

The country's turn to international markets was signaled in January, after Laos received its first rating of B3 from credit rating agency Moody's. It came four years after Laos sold $182 million in U.S. dollar bonds in two tranches to institutional investors in Thailand. Laos has also issued sovereign bonds denominated in Thai baht to fill its coffers.

But Fitch Ratings has exposed the scale of the landlocked country's looming financial crisis. In mid-May, it downgraded its outlook for the nation's debt from "stable" to "negative" in a report that shines a penetrating light into a communist country notorious for its oppression and secrecy.

"The Negative Outlook reflects the economic and financial-market effects of the coronavirus shock, which have compounded Laos' external financing risks associated with its forthcoming external debt maturities and low foreign-exchange buffers," the report states.

Laos has limited room to maneuver, with its foreign exchange reserves estimated at $1 billion at the end of March. Fitch believes the government will seek loans from commercial banks to fund its external payments.

The French investment bank Societe Generale said that 80% of the debt in 2019 was dominated in foreign currency and externally held, and "almost half of the public debt is held by China alone."

The economic impact of COVID-19 has been more severe than the infection rate in Laos. According to official figures, the country of 7 million has had 19 cases and no fatalities. The nation, which has a weak health system, has tested 5,938 people suspected of being infected.

The government's containment strategy, including a shutdown, affected service sectors like tourism and hospitality that help to boost foreign exchange reserves. Consequently, the World Bank forecasts that the virus's economic impact will push Laos' growth down to "1% in the baseline scenario and negative 1.8% in a lower-case scenario."

This represents a big downturn from the country's stellar growth record of an average of 8% a year from 2011 till 2014, and around 7% in subsequent years. The International Monetary Fund had projected Laos growing at an annual pace of 6.3% from 2016 until 2036.

But such growth has been overshadowed by the debt Laos took on to finance a range of large infrastructure projects. According to Societe General, the French investment bank, the increasing GDP-debt ratio reveals how much Laos is beholden to China, its huge northern neighbor. China has become the country's leading foreign investor and lender.

China's economic footprint in Laos has been shaped by multi-billion dollar projects, including a $6 billion high-speed train line, a collection of large hydropower dams, a highway and many special economic zones. Laos' share of the Kunming to Vientiane railway project is 30%, and Laos has to pay its first tranche of $250 million this year through a low-interest loan from China. 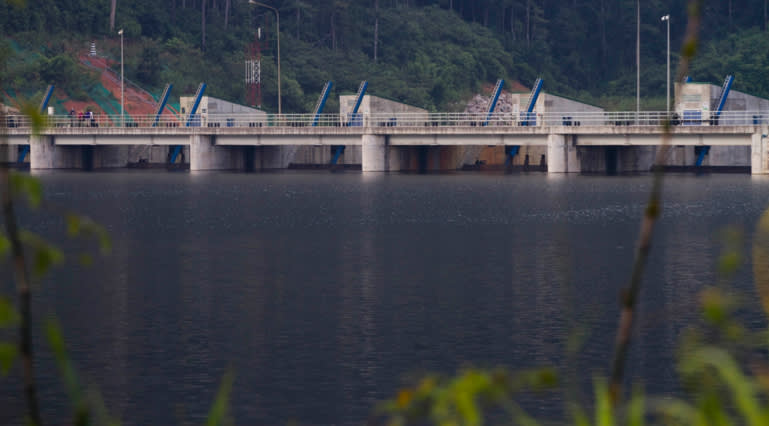 The Nam Theun 2 dam on the Nam Theun river in central Laos, one of Asia's poorest countries. The $1.3 billion hydroelectric dam was officially inaugurated in 2010. (AP Photo/David Longstreath)   © AP

Laos has struck similar deals to build large and small hydropower projects to tap its rich water resources, including the main stream and tributaries of the Mekong River, Southeast Asia's largest body of water. An estimated 400 hydropower projects have been completed, or are being built or planned amid Laos' quest to become the "battery of Southeast Asia" by exporting electricity to its neighbors.

But environmentalists believe Laos is rapidly sinking into debt behind dams financed by foreign money, some of which cost billions of dollars.

"Hydropower projects are capital-intensive investments, which require [a] majority of [the] financing up-front," said Gary Lee, Southeast Asia program director at International Rivers, a global environment campaigner. "The rapid increase of hydropower in Laos has coincided with [an] increasing debt burden and stress in the country."

The projects can be risky, something green groups underline by noting the collapse of the auxiliary dam near the Xi Pian-Xe Namnoy hydropower complex in 2018. The complex was being developed as a joint venture between Laos and two South Korean companies, with Laos having to pay its share of the initial 30% equity in up-front financing. This 30-70 or 25-75 ratio is a template for dam building, with the larger tranche secured through loans.

"But even in this case," said Premrudee Daoroung, coordinator of the Laos Dams Investment Monitor, "the Laos government had to get a concessionary loan from the Export-Import Bank of Korea to meet its share of the equity. It was in debt for this project from the start."

Such arrangements have pushed Laos to the brink of defaulting, warns David J.H. Blake, a British academic specializing in water governance and political ecology in the Mekong region. "Laos, to my mind, has been the Wild West of dam building for a decade now, and it seems that reality is starting to catch up, as the bills become due," he said. "Creditors like China might have to call in its debts by demanding control of assets."