Lockdown-free Singapore has 'social distancing' down to a science 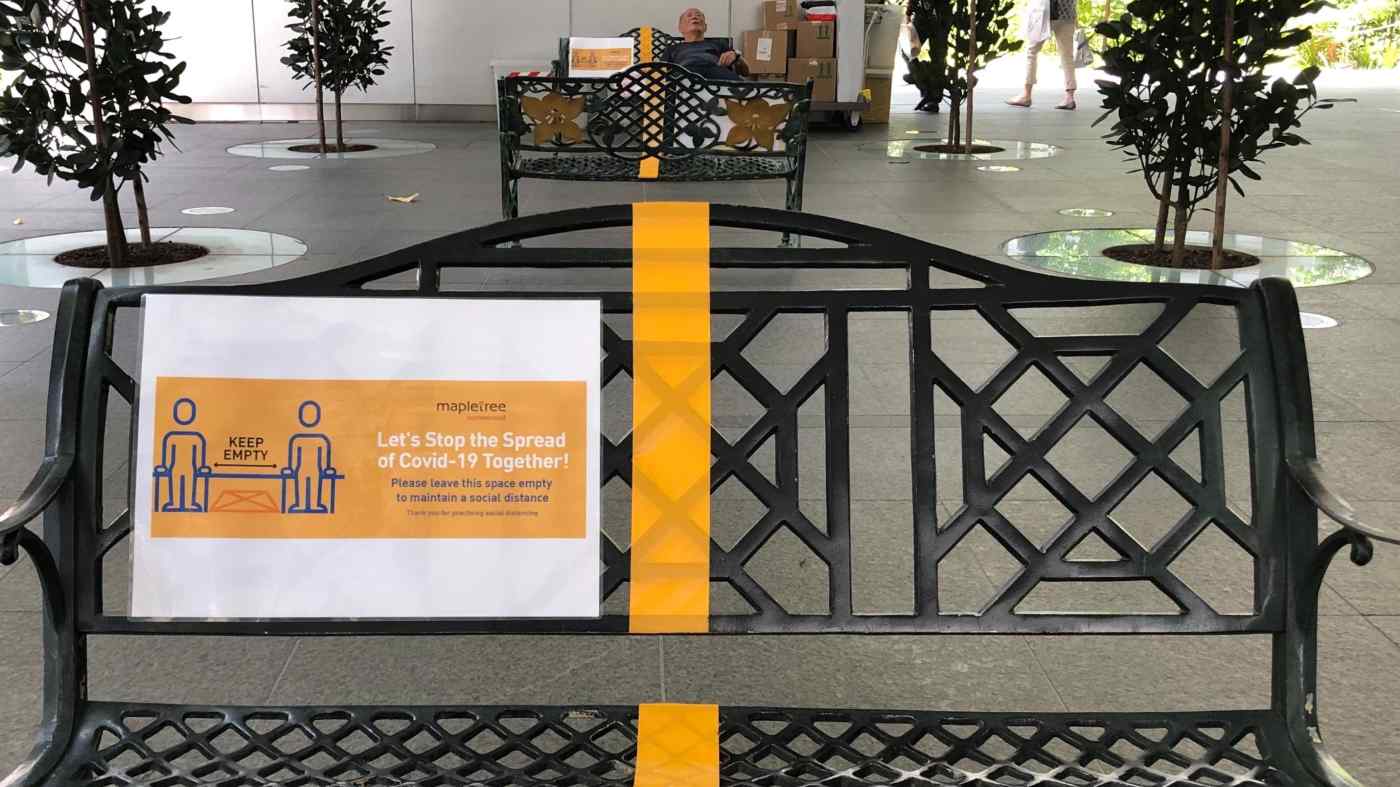 Singapore has gone to great lengths -- and made ample use of tape -- to keep residents from getting too close amid the coronavirus outbreak. (Photo by Kentaro Iwamoto)
KENTARO IWAMOTO, Nikkei staff writerMarch 30, 2020 11:54 JST | Singapore
CopyCopied

SINGAPORE -- From New York to Bangkok to New Delhi, some of the world's biggest cities are locked down to fight the new coronavirus. Singapore is an exception.

So far, at least, the city-state has avoided the curfews and sweeping business closures seen elsewhere during the pandemic. Tight border controls and strict tracing of COVID-19 patients are two reasons. But there is another key to the city's semblance of normalcy: a government-led "social distancing" or "safe distancing" campaign that is visible just about everywhere.

At "hawker centers," or food courts, alternating seats are marked to remind customers to leave room between themselves and others. At ticketing machines in subway stations and checkout counters in supermarkets, lines on the floor are spaced about 1 meter apart, as a cue for where to wait.

New directives keep coming. As of the end of last Thursday, restaurants are now expected to keep at least 1 meter of distance between tables, and limit groups of diners to 10 people at the most.

The previous week, the government required operators of public venues to ensure at least a meter of separation between visitors. And in workplaces, the authorities advised employers to take steps to reduce close interactions among staff, including teleconferencing and staggered hours. 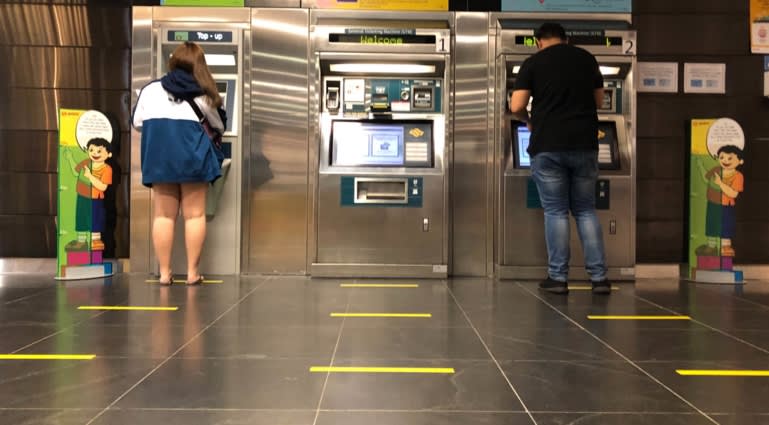 While social distancing has become a buzzword around the globe, Singapore has elevated it from a vague concept to a very specific set of guidelines. Employers, for example, are supposed to stagger their starting hours across at least three one-hour blocks, and have "no more than 50% of total employees reporting to work" within each block.

Lawrence Wong, the national development minister, told reporters on March 20 that distancing measures are "the third line of defense" against the deadly virus. Entry restrictions -- no visitors are allowed in and returning residents must spend two weeks in isolation -- and thorough tracking of potential patients with the help of the police are the first two.

Early on in the outbreak, Singapore warned against handshakes, and later banned any large gatherings of 250 people or more. But Wong said social distancing needed to be practiced "more rigorously" to protect the city.

Indeed, despite all these efforts, coronavirus cases have been rising of late. So last week the safeguards were expanded further still. Seats in Singapore's food halls are marked to remind diners not to sit too close to others. (Photo by Kentaro Iwamoto)

Besides the new restrictions on restaurants, bars, cinemas and some entertainment venues are to be closed. Shopping malls can remain open on the condition that they limit traffic. The government says no place should have "more than one person per 16 sq. meters of usable space."

Eugene Tan, an associate professor of law at Singapore Management University, suggested the benefits may go beyond keeping the population healthy.

"During these challenging times, keeping as close to the routine [as possible] can be psychologically comforting as well," he said. "This social resilience will be helpful, as the pandemic will be long-drawn, trying and confidence-sapping."

Singapore has not ruled out following Asian neighbors now in lockdowns. Malaysia has stopped most business operations and last week extended a "movement control order" to April 14. India last Wednesday started a three-week nationwide curfew. Bangkok has shuttered shopping malls and restaurants. Even Tokyo pleaded with residents to refrain from going out over the weekend.

But as long as the spread of the virus remains relatively controlled, the small city-state appears reluctant to choke its economy any more than it has to. It is merely urging residents to stay home as much as possible -- and to keep their distance when they go out.

"The months ahead will be challenging," Health Minister Gan Kim Yong said in parliament. "We need to be prepared for disruptions to our daily lives, and changes to how we do things."