The new package came a day after neighboring Singapore unveiled its own second set of measures, valued at $33 billion. But as countries across the Southeast Asian bloc scurry to shore up their economies against the impact of the pandemic, some look likely to run out of maneuvering room much faster than others.

Over $23.1 billion will be allocated to support businesses, including income tax deferments and a special $693 million soft loan facility for small and midsize enterprises. The government also made a $231 million commitment to a food security fund, and set aside $374 million for the Health Ministry to buy equipment and bring in external experts to fight the virus, which has infected more than 2,000 Malaysians to date.

Even before Malaysia introduced the second package, however, experts were warning that its government -- and Indonesia's -- are the most likely to be strained by the stimulus drive. Both nations are saddled with high public debt and fiscal deficits, along with self-imposed limits to avoid excessive borrowing.

In a research paper, Maybank Kim Eng analysts noted that Malaysia already had public debt equivalent to 52% of gross domestic product, near its ceiling of 55%. But with the country under tight movement restrictions until at least mid-April, Muhyiddin's government charged ahead with the enormous package.

In a nod to the fiscal pressure, Muhyiddin said, "Most of the initiatives are all one-offs to ensure no burden on the government's financial performance in the medium-term."

The nation, he stressed, is "at war with invisible forces."

Yet, the virus is not the only threat to the Malaysian government's finances. The oil market turmoil brought on by feuding exporters Russia and Saudi Arabia is another.

"Collapsing oil prices will also impact Malaysia's fiscal revenue, as about a quarter is oil and gas-related," Maybank's paper said, noting that the country's sovereign rating may be tested as economic headwinds build. 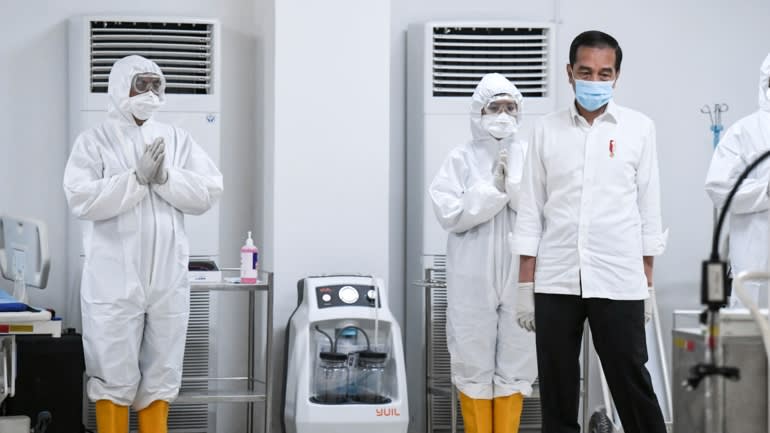 Southeast Asia's most populous nation has cobbled together 158 trillion rupiah ($9.9 billion) worth of stimulus policies, including a relaxation of income taxes for employees and companies.

But Maybank noted that the country's import levy and income tax waivers, plus a 30% corporate tax reduction for 19 sectors, will widen its budget deficit to 2.5% of GDP for the 2020 financial year -- up from the initial target of 1.8%. Already on its second wave of coronavirus relief measures, Indonesia is quickly closing in on its legal budget deficit limit of 3% of GDP.

A parliamentary committee has suggested raising the limit to 5% to give the government more leeway amid the pandemic.

Analysts told the Nikkei Asian Review that Malaysia and Indonesia face the unpalatable prospect of digging deeper pits for themselves.

"Well, they have no choice, basically," said Song Seng Wun, private banking economist at CIMB. "If year after year you are collecting less than what you're spending on, because we have moved from one crisis to another, inevitably it puts pressure on the governments' finances."

The Philippines, Thailand and Vietnam have more wiggle room than Malaysia and Indonesia, according to Maybank. Vietnam's public debt has declined from its peak of 64% of GDP in 2016, while for Thailand, lower crude prices help to narrow its oil and gas trade deficit.

"The Philippines has a trade deficit but it is relatively small," Chua Hak Bin, senior economist at Maybank Kim Eng, told Nikkei. Manila's current-account deficit stands at around 1.1% of GDP. "They have a bit more room but obviously, they are kind of sandwiched in the middle," he said.

Wealthy Singapore occupies the most comfortable fiscal position for softening the blow from the pandemic, analysts said.

To save jobs, the government will pay 25% of monthly wages for every local worker in employment, capped at SG$4,600, for nine months until the end of 2020. Self-employed workers will get SG$1,000 a month over the same period.

And to help fund the outlays, SG$17 billion is to be drawn from locked-up financial reserves -- only the second time in history that the government has dipped into its war chest. The last time was in 2009, in the aftermath of the global financial crisis.

Singapore does not publicly disclose its total coffers, but some analysts estimate the reserves exceed $1 trillion.

This means the government has a comfortable buffer even though, by law, it is required to run a balanced budget each term. Singapore officials have conscientiously avoided excessive borrowing to fund the expenses of the day.

For Singapore's ruling People's Action Party, which built its support base by delivering stellar growth, protecting the economy is a high priority with an election around the corner. Despite the outbreak, the government is expected to call a vote soon, as its term expires next spring.

"The COVID-19 pandemic and the multiple threats it poses to our nation is the sort of event that we have accumulated reserves for," Heng Swee Keat, the finance minister and the man tipped to be Singapore's next prime minister, said on Thursday when he announced the extra aid.

"We have saved up for a rainy day," he added, warning, "The COVID-19 pandemic is already a mighty storm, and is still growing."