Malaysia aims to unshackle economy as adult vaccinations near 90% KUALA LUMPUR -- Malaysia plans to reopen more of its economy in October, banking on a rising vaccination rate and falling infection numbers amid lingering concerns that COVID-19 could surge again.

The government intends to allow interstate travel, as well as reopenings of theme parks and entertainment venues, once 90% of adults have received two shots -- a threshold expected to be reached by next week. About 84% of adults had been fully vaccinated as of Monday, with over 150,000 receiving their second doses daily.

Health Minister Khairy Jamaluddin recently assured parliament that allowing interstate travel would not result in a spike in new cases, as until now the problem has been mainly large gatherings. Khairy also said the 90% vaccination rate among adults represents 60% of the overall population, thus reducing the risks.

Beyond the reopening, the government aims to spur growth to an average of 4.5% to 5.5% for the years 2021 to 2025 and turn Malaysia into a high-income economy, Prime Minister Ismail Sabri Yaakob announced on Monday. His "Malaysia Plan" calls for pouring 400 billion ringgit ($95.5 billion) into development initiatives during the period.

New daily coronavirus cases are down sharply from the peak of over 24,000 in August, with the seven-day average now around 14,000. Although the country still faces a battle, it hopes to move into a phase of living with COVID-19 as an endemic disease, similar to the approach neighboring Singapore is taking.

But also like Singapore -- which is itself fighting a growing wave of infections -- officials are wary of breakthrough cases among the vaccinated and are resorting to third doses. Ismail Sabri announced that his government had approved boosters for individuals at high risk, a week after Singapore commenced the extra shots on Sept. 14. As seen elsewhere, data out of Malaysia shows regular two-dose vaccinations largely work, officials stress. Kalaiarasu Peariasamy, director of the Health Ministry's Institute of Clinical Research, said a study of 1.2 million people showed that being fully vaccinated reduces the risk of death by 88%, and should offer 86% protection against symptomatic infection and 83% against admission to intensive care units.

He said about 1,445 patients -- or 0.01% of the 14.5 million fully vaccinated individuals as of Sept. 12 -- had died due to breakthrough infections. The numbers also show the Chinese vaccine made by Sinovac Biotech is effective despite persistent doubts: 1,108 of the deaths were individuals fully vaccinated with Sinovac, accounting for 0.015% of the 7.2 million Sinovac-jabbed people overall.

"The message is very clear," Kalaiarasu said. "Those who are fully vaccinated get the maximum benefits from the vaccines in terms of preventing deaths, ICU admission and symptomatic infection."

The ratio of Sinovac recipients who required intensive care was also low at 0.011%, albeit higher than the 0.002% for about 6.5 million people inoculated with Pfizer-BioNTech and 0.001% among over 740,000 AstraZeneca recipients.

Still, the breakthrough numbers are enough to stir fears of another resurgence, and some outside Ismail Sabri's government are urging caution.

"We all are very concerned about the breakthrough infections, especially by the delta variants," Dzulkefly Ahmad, Malaysia's former health minister, told Nikkei Asia. He emphasized more troubling data out of Selangor, Malaysia's wealthiest and most populous state, where he heads the local COVID-19 task force.

He said that of 5,725 COVID-19 deaths reported in Selangor from June to September, about 7.3%, or 418, had been fully vaccinated. Of those, Sinovac recipients constituted 82%.

Dzulkefly, who was health minister under Mahathir Mohamad from 2018 to 2020, argued the inoculation rate alone should not be the benchmark for reopening.

"Although the 90% number for adults vaccination is a good indicator, may l just remind that this is only around 60% of the total population -- we have also our children to care for, notwithstanding the undocumented and immigrants," he said. "Beyond vaccination coverage, we must use other ... indicators including bed occupancy rate and ICU [admissions]."

Nationwide inoculations of adolescents began last week. After trials and some early shots for youths with medical conditions, 28,000 or 1% of Malaysians aged 12 to 17 have been fully vaccinated. 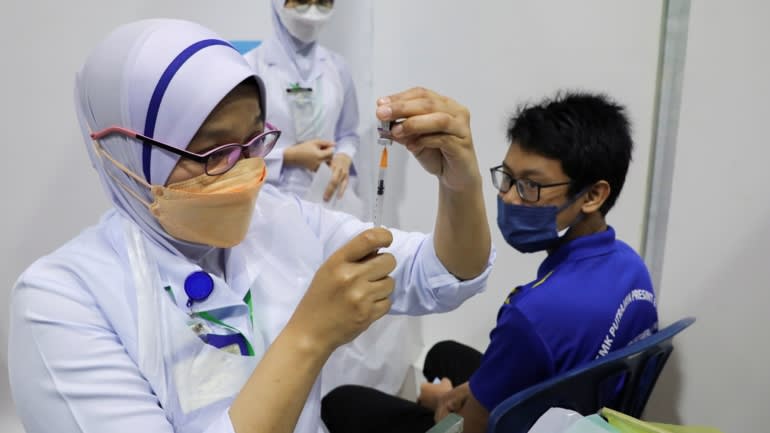 A nurse prepares a dose of the Pfizer vaccine for a secondary school student in Putrajaya, Malaysia, on Sept. 20.   © Reuters

Dzulkefly, a member of parliament, said the Ismail Sabri government needs to carefully prepare for a broader economic restart, including the resumption of international arrivals.

"We should open up all borders but please obey strict enforcement in regulating entries to fully vaccinated people, prepare our health care facilities for the next incoming surge, and have a robust pandemic or outbreak rapid response plan," he urged.

"Please think through, and be ahead of the curve this time and not be reactive."

Even as the reopening plans move forward, the case count remains elevated and the pandemic's staggering impact will not be soon forgotten. As of Monday, total cases had reached about 2.2 million, with more than 25,000 deaths.

But relief may be at hand for businesses and workers who have suffered through sustained economic restrictions since COVID-19 was detected in the country in February 2020. The Greater Klang Valley -- the country's economic heart, including the capital Kuala Lumpur -- remains in a "recovery" phase with all economic sectors limited to half capacity.

Unemployment has jumped since the initial movement control order was imposed in March last year. As of August, the jobless rate stood at 4.8%, equivalent to about 770,000 people, according to the Department of Statistics.