SINGAPORE -- Malaysia's coronavirus lockdown on Wednesday has forced its neighbor, Singapore, to launch urgent measures to mitigate the impact.

Singapore has strong ties with every Southeast Asian country, from Indonesia to Thailand. But its relationship with Malaysia is uniquely interdependent: About 300,000 people living in Malaysia commute across the border every day, while Singapore relies on water and food imports from the country next door.

So Malaysia's decision to ban foreign visitors from coming in and residents from going out for two weeks, until March 31, has disrupted business and daily life for Singaporeans. The city-state's government has rushed to calm fears about food shortages and introduce a housing subsidy to help keep some Malaysian workers on the job during the lockdown.

Malaysia's new government led by Prime Minister Muhyiddin Yassin announced the border closure on Monday as it sought to stem the rise in cases of COVID-19. As of Tuesday, the country had reported 673 infections, with two deaths, while Singapore had managed to limit its cases total to 266.

Both countries have seen infections increase in recent days.

"We understand why [Malaysia has] to do this and we are continuing discussions with them," Lawrence Wong, Singapore's national development minister, told reporters on Tuesday. "The land crossing with Malaysia is something quite unique and needed special consideration given the high volume of people and goods coming through the land checkpoints," he stressed. 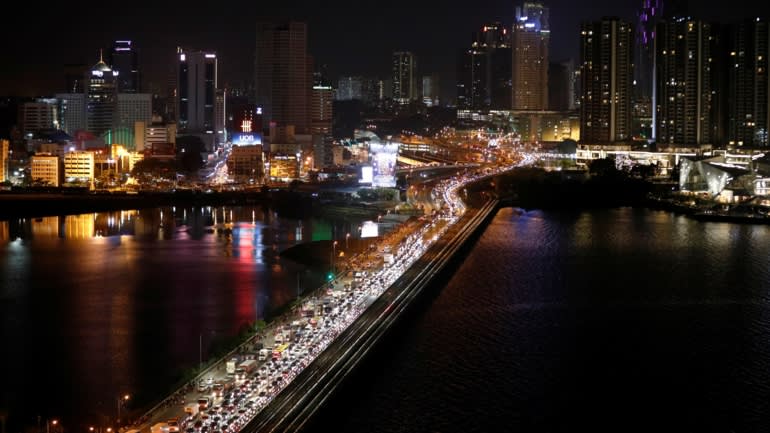 Cars inch their way from Malaysia to Singapore in the hours before the border closure.   © Reuters

The two countries, which used to be a single nation until Singapore's independence in 1965, are separated by a 1 to 2 km-wide strait and connected by two roads. Since Singapore's land and workforce are limited, some of its companies employ workers who live in Malaysia -- typically in the southern state of Johor. Many of these people zip across the border on motorbikes to work at factories and offices on the northern side of Singapore.

"[Our] member companies urgently depend on the continued flow of people and goods across the border," Dwight Hutchins, chairman of the American Chamber of Commerce in Singapore, said in a statement on Tuesday, calling for special exemptions from what Malaysia calls the "movement control order."

The order, Hutchins added, "will also inadvertently degrade both countries' ability to effectively combat COVID-19, as stopping the flow of people will also impede the flow of health care workers and medical supplies between the two countries."

Singapore's government scurried to arrange temporary, subsidized accommodations for at least some Malaysian workers before the travel ban took effect at midnight. About 10,000 workers had been matched with hotel rooms or other lodgings as of Tuesday evening. To cover the costs, the government was offering their employers a stipend of 50 Singapore dollars ($35) per worker, per night for up to 14 nights. Singapore residents line up to buy essential groceries despite assurances that food supplies will not be disrupted.   © Reuters

For ordinary residents in Singapore, meanwhile, the biggest worry is the food supply. The city-state's food self-sufficiency rate is less than 10%, and Malaysia is one of its key sources of imports. Government statistics show that 37% of chicken imports, 67% of leafy vegetables and 39% of fruit came from Malaysia in 2018.

Longer-than-usual lines formed at Singapore's supermarkets on Tuesday, despite assurances that Malaysia would keep food and other cargo flowing.

Singaporean Trade Minister Chan Chun Sing insisted there was no reason to worry, as the country has three months' worth of rice and noodles, plus enough meat and vegetables for two months.

"A disruption of supplies from Malaysia is a contingency scenario we have planned for many years," Chan said in a Facebook post. "We have put in place robust plans to manage this scenario and will continue to review our strategies to ensure that Singaporeans never run out of food or essential supplies."