PM adds $9.7bn of stimulus while hospitals struggle to cope with bodies KUALA LUMPUR -- A brutal wave of COVID-19 infections has pushed Malaysia back into "total lockdown" mode, effective Tuesday, prompting the government to unveil over $9 billion worth of extra stimulus and clouding the prospects for holding a long-anticipated election anytime soon.

The country has been under a coronavirus state of emergency, approved by the king, since Jan. 11, when it reported 2,486 new daily infections. Since then, the figure has nearly quadrupled, hitting a high of 9,020 on Saturday.

Health Director-General Noor Hisham Abdullah noted over the weekend that the death toll for COVID-19 so far this year is already more than four times higher than the full-year figure for 2020, bringing the total to 2,650. In a Facebook post, he warned that hospital mortuaries were having difficulty handling the "sudden increase" in dead bodies, and that special containers would be provided.

Caring for the living becomes more difficult by the day, with 76,218 active COVID-19 cases, out of an overall total of 566,000. Heath experts warn that cases and deaths are likely to continue rising, amid a battle with more infectious variants first detected in India and Africa.

Starting Tuesday, all economic sectors will be shuttered or slowed down for at least 14 days, except for some essential services such as supermarkets and pharmacies. Government ministries said on Sunday that some manufacturing would continue with reduced workforces, including protective gear, food, oil and gas, and electronics. The setback casts a pall over the central bank's forecast for 6% to 7.5% gross domestic product growth for this year, after the 5.6% contraction in 2020 and a 0.5% fall in the first quarter. Several other Southeast Asian countries are struggling to fend off the virus and pick up the economic pace, including Thailand.

To soften the blow from the new restrictions, Malaysian Prime Minister Muhyiddin Yassin on Monday announced an additional 40 billion ringgit ($9.7 billion) stimulus package. This includes a direct fiscal injection of 5 billion ringgit from the government.

Some 2.4 billion ringgit will be disbursed to low-income households while micro, small and midsize enterprises stand to receive 1,500 ringgit each. Banks will also offer a three-month moratorium on loan repayments.

"The government will continue to prioritize the whole-of-government and whole-of-society approaches in fighting the pandemic," Muhyiddin said in a televised address. He said his entire cabinet -- ministers and deputy ministers -- will not be taking salaries for three months, channeling the money into a COVID-19 fund instead.

Government finances are tight as it is. The deficit is expected to hit 6% of GDP this year, reflecting the 340 billion ringgit of stimulus packages already dished out since March last year.

At the same time, a political controversy is brewing over a possible extension of the state of emergency beyond the current Aug. 1 deadline.

King Sultan Abdullah Ri'ayatuddin granted Muhyiddin's request for the emergency in January as a last resort to curb the virus. But the prime minister's move was met with howls of criticism because it meant suspending parliament, where the opposition, led by Anwar Ibrahim, insists he no longer controls a majority.

Former Prime Minister Mahathir Mohamad -- the man Muhyiddin ousted from power in early 2020 -- went so far as to lead an entourage to the palace to express his objections in writing.

The emergency shielded Muhyiddin from having to call an election, which he has promised to do once COVID-19 is under control. Now, with two months to go before the current emergency expires, political observers say the writing is on the wall for an extension.

"It is very likely that the mounting pandemic will be conspicuously cited to justify the extension of the emergency," Oh Ei Sun, senior fellow at the Singapore Institute of International Affairs, told Nikkei Asia. 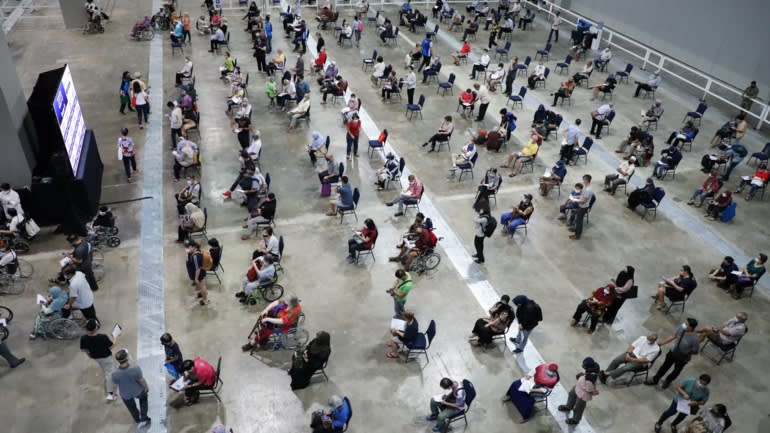 People wait for their COVID-19 shots at a vaccination center in Kuala Lumpur on May 31.   © Reuters

But political analyst Sara Chinnasamy said that although the king may well accept an extension, Muhyiddin's opponents will put up another fight. She said it will spark "lots of resistance," especially from political rivals, who will urge the reopening of parliament "mainly to measure the support commanded by the prime minister."

Lim Guan Eng, head of the opposition Democratic Action Party, made a statement late last week arguing that the coronavirus surge should not be used to justify a longer state of emergency, according to local media. "Facts and figures prove that both the emergency and the suspension of parliament has not only failed to reduce infections but instead has seen a dramatic increase," Lim was quoted as saying.

In the run-up to Aug. 1, the king is expected to be advised by the government, as well as an independent committee comprising cross-party parliamentarians, along with health experts. The monarch did say in February that, technically, the emergency does not completely preclude parliament sittings.

Still, for Muhyiddin, the emergency offers the prospect of political stability at a time when his governing coalition is anything but solid.

Some government backbenchers from the coalition's largest party, the United Malays National Organisation, have publicly withdrawn support for the prime minister. UMNO has also ruled out teaming up with Muhyiddin's Malaysian United Indigenous Party in the next election and has threatened to abandon the coalition. Even if UMNO were to rescind support during the emergency, however, the current government would remain in power.

Experts agree that voters should not hold their breath for polls.

Oh said: "There is no reason to suppose that elections will be held anytime soon," since, in principle, they can be put off indefinitely under the emergency. 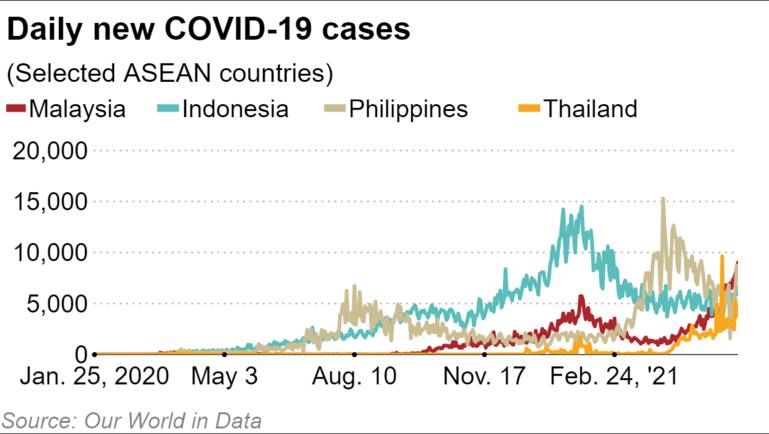 Sara, an associate professor at MARA University of Technology, concurs and expects a vote will only be called next year, after Malaysia achieves herd immunity. The government hopes to do that by vaccinating around 80% of the population by the end of this year.

"The government should have learned some lessons from the United States and India, where new COVID-19 cases rocketed after holding local elections," she said.

Sivamurugan Pandian, a political analyst at Malaysian Science University, said the government's primary focus now must be increasing the vaccination rate to get more people immunized. About 6% of Malaysians -- just over 1.9 million people out of the population of 32 million -- have been vaccinated, according to the government's website for the program.

"I think the focus should be on getting the majority vaccinated, and then they can decide on the general election," Sivamurugan said.