LANGKAWI, Malaysia -- With six children in tow, Khatijah Ibrahim was soaking in the ocean breezes and picturesque scenery of Malaysia's Langkawi on Saturday.

"It's definitely a relief that we can finally step out from Kuala Lumpur to a beautiful island," said the accountant. Although she had some concerns about the trip, due to COVID-19, she said it was worth it to relieve the pandemic's mental strain. "In the last year, it has been the shuttle between work and home for me. It has been the worst for my children. So it's great to finally get some fresh air," she said.

Since Thursday, thousands of Malaysians like Khatijah and foreign residents have been streaming back to the island tourist haven that served as a backdrop for movies like "Crazy Rich Asians" and "Anna and the King." The government that day reopened the duty-free resort area to domestic travelers who have received two COVID-19 vaccine doses, in a pilot project aimed at reviving the tourism industry.

All visitors are subject to virus tests before entry, which detected nine positives in the first two days. Industry watchers hope the Langkawi bubble will be a precursor to allowing interstate travel -- which remains restricted as the country fights a persistent wave of infections -- and ultimately international arrivals.

The government has warned that it could reverse the Langkawi reopening if it proves too risky. But for now, businesses are simply relieved to see planeloads of passengers return. David Macklin, general manager of the swanky Four Seasons Resort Langkawi, told Nikkei Asia that the hotel has seen a rise in reservations and inquiries since the reopening announcement was made. "Many of our guests are already making reservations for the fourth quarter of 2021," he said.

"We are excited to see that the fourth quarter of 2021 will be our best quarter since the first quarter of 2020," Macklin said. "We also have reservations coming in 2022 already, and some of those are international tourists waiting for borders to reopen."

The excitement is mixed with a sense of caution, however.

Former Prime Minister Mahathir Mohamad, who represents Langkawi in parliament, told Nikkei Asia that the reopening effort is to be welcomed but that the government should sharpen the regulations. "We need to improve the standard operating procedures further because the main issue I see among the tourists is a lack of social distancing, especially on flights inbound to Langkawi," the 96-year-old said during a walkabout to greet visitors and local residents.

Mahathir and others look to Thailand's reopening of Phuket to vaccinated international travelers this year for lessons. The island subsequently saw a flare-up of COVID-19 cases, largely among local residents. "In Thailand, they opened and made their people too free to move while their [nationwide] vaccination rate was low," he said.

Despite his concerns about social distancing, Mahathir said the Langkawi reopening was "more strict."

Eugene Dass, a member of the Malaysian Association of Hotels board, echoed the need to draw on Thailand's experience. "It should be a lesson learned by all, both to the hotels and the authorities," he said. "As for hotels, we have put in place COVID-19 prevention and care measures and all hotel staff on the island are also fully vaccinated." 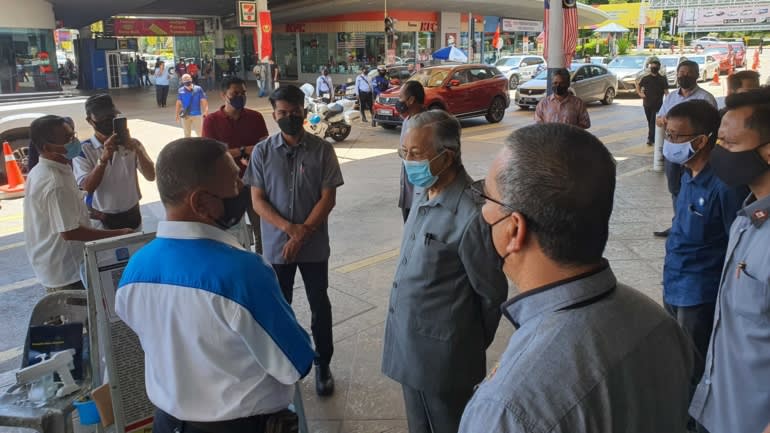 Former Prime Minister Mahathir Mohamad, who represents Langkawi in parliament, tours the area on Sept. 18 after it reopened to visitors. (Photo by P Prem Kumar)

Still, the reopening of Langkawi to domestic visitors is a much-needed glimmer of hope for an economy that relies heavily on small and midsize enterprises, tourism and leisure.

Malaysia's economy has not been fully open since its first cases of COVID-19 were detected in February 2020. The country's economic heart -- the Greater Klang Valley, which includes the capital Kuala Lumpur -- remains in the "recovery" phase, with all economic sectors allowed to operate at only half capacity.

Unemployment has jumped since the initial movement control orders were imposed in March last year. As of August 2021, the rate stood at 4.8%, equivalent to about 770,000 people, according to the Department of Statistics.

The country is still locked in a serious battle with COVID-19, with infections remaining close to 20,000 a day. As of Friday, total cases had surpassed 2 million with more than 22,000 deaths.

On the other hand, Malaysia is making significant progress with vaccinations. The country is inoculating over 200,000 people daily and has given double doses to about 56% of its adult population, with 67% having taken one shot.

That has allowed initiatives like the Langkawi reopening -- and allowed people like businessman Mokhtar Ibrahim to finally get away.

Mokhtar is on a long-delayed honeymoon with his wife. The couple got married in January of this year, as COVID-19 cases surged in the country and enhanced movement controls were imposed.

"We got married at home with our parents as witnesses. We thought we could use the money for our honeymoon, and we have been eagerly waiting for this opportunity," he said. "Thank God it's Langkawi and not some other place."