The rollout will be the largest vaccination drive in the country's history, targeting over 26 million residents.

And Malaysia is just one of several countries in the Asia-Pacific region marking vaccine milestones this week. Australia launched its campaign on Monday, Thailand and Vietnam took their first deliveries on Wednesday and South Korea is due to start shots on Friday.

Muhyiddin, who survived a bout with cancer two years ago and turns 74 in May, received the first of two Pfizer-BioNTech doses at an immunization center in the administrative capital, Putrajaya. Up next was Health Department Director-General Noor Hisham Abdullah, who became the face of Malaysia's coronavirus fight last year with near-daily TV appearances.

In the initial phase between now and April, 500,000 medical workers and non-medical front-line staff are to be immunized. Then will come phases for everyone else who registers for the voluntary and government-paid shots. Factored into the plans are foreign nationals, including refugees and illegal arrivals, to ensure a complete wipeout of the virus.

But professor Subramaniam Muniandy, president of the Malaysian Medical Association, told Nikkei Asia that he hopes the "planning is better than the communication."

"Right now, some government hospitals have identified and informed their staff when and where they will be immunized," he said. "Others have only given general statements about when vaccination will start and said individuals will be informed later. In some states, private doctors have been given dates for vaccination. In many others, private doctors have had no information."

To date, Malaysia has secured over 66 million doses of coronavirus vaccines from five producers -- more than enough to cover the country's entire population of around 32 million. Nevertheless, the authorities are currently only aiming to inoculate 80% by February 2022, and only the Pfizer shot has Health Ministry approval.

"Relying only on one provider might lead to shortages or delays," Subramaniam said. "Spreading out the suppliers is a good idea provided efficacy and safety are not compromised."

As of Wednesday, Malaysia has received over 500,000 doses of the Pfizer vaccine, with a full order of 32 million to trickle in throughout the year. State experts are still examining the Chinese-made Sinovac Biotech vaccine, which is scheduled to arrive in the country on Saturday. 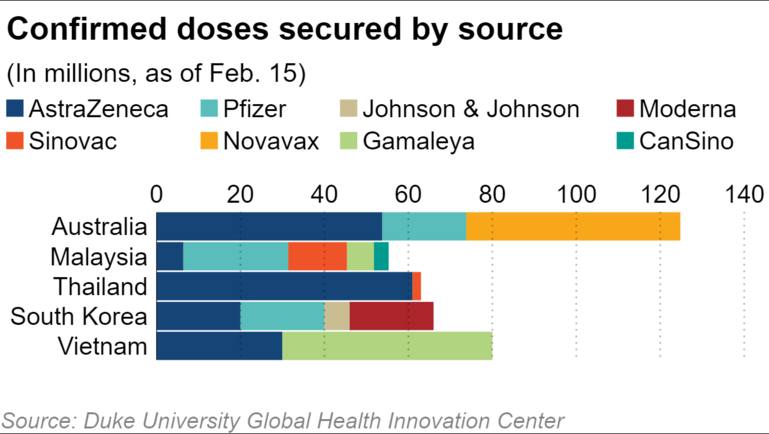 The launch of Malaysia's vaccine drive highlights a rush of activity regionwide.

Countries are eager to follow in the footsteps of Singapore and Indonesia, which started immunizations in January, and more recently Japan, where shots began last week. The latest programs are counting on a diverse mix of vaccine suppliers, not only Pfizer and Sinovac but also AstraZeneca and others.

Although the reality is that most countries are either just starting or gradually ramping up vaccinations, many in Asia have watched enviously as some nations sped ahead. Israel had administered 87 doses per 100 people in its population as of Monday, with the United Arab Emirates having distributed over 56, the U.K. 27 and the U.S. 19, according to the statistics site Our World in Data. Singapore, which started its rollout on Jan. 8, was up to 6.15 as of last week.

A lot is riding on countries' efforts to accelerate the process. The World Bank said in January that faster vaccinations could help power global growth to nearly 5% this year. But it warned: "A downside scenario in which infections continue to rise and the rollout of a vaccine is delayed could limit the global expansion to 1.6% in 2021."

As Malaysia's Subramaniam put it, delays have "more disadvantages than advantages. The faster people are immunized, the less illness and deaths, and the better it will be for the economy."

Like Muhyiddin, Australian Prime Minister Scott Morrison received his first Pfizer jab on Sunday, before the official launch on Monday.

Greg Hunt, Canberra's minister of health and aged care, on Tuesday explained plans to increase weekly available doses. Starting with 60,000 shots this week for high-priority individuals, Hunt said 80,000 would be up for grabs next week. And after introducing the Oxford-AstraZeneca option and domestically made doses of it in March, he said that "we should have approximately 1 million doses per week that are available" around the end of that month.

"We're in a strong position, and the news from both providers and companies overnight has been heartening and strong," Hunt said.

While Australia and Malaysia were getting their campaigns into gear, Thailand's first vials were being flown into Bangkok on Wednesday. A Thai Airways International cargo flight carrying 200,000 doses from Sinovac arrived at Suvarnabhumi International Airport, and 117,000 AstraZeneca doses were due to arrive the same day. 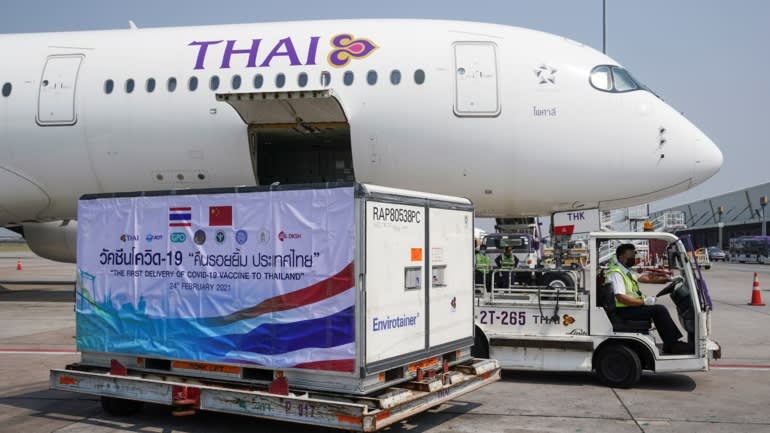 "Today is our historic day of getting the first lot of vaccines," Thai Prime Minister Prayuth Chan-ocha said. Although he alluded to "some problems" in obtaining shots, he stressed that "the government is trying hard to get the vaccines on schedule."

The Ministry of Public Health will conduct quality checks before injections begin. Prayuth is to receive the first shot, possibly this weekend.

"It's important that Gen. Prayuth takes the first COVID-19 vaccine shot because he is the country's leader," Deputy Prime Minister and Public Health Minister Anutin Charnvirakul said on Tuesday. "There will naturally be a risk assessment process by the Department of Disease Control, which is an internationally accepted standard procedure."

Anutin added that the prime minister would be getting the AstraZeneca vaccine.

As for the Sinovac doses, the Ministry of Public Health said on Facebook that the target population will receive notifications between now and Sunday, with the first shots to be administered next Monday.

Though Thailand is set to receive another 800,000 doses from China in March and a further million in April, it has placed its biggest bet on AstraZeneca as it looks to inoculate about 50% of its roughly 70 million people within 2021.

The government approved a plan to buy 61 million doses from the Anglo-Swedish multinational. A portion will be domestically produced by Siam Bioscience through a technology transfer deal. Siam Bioscience is almost wholly owned by King Maha Vajiralongkorn.

AstraZeneca's vaccine has been dogged by lingering questions about efficacy, but fresh data out of Scotland is promising. A study there on the effects of vaccines between Dec. 8 and Feb. 15 found that, four weeks after the initial dose, AstraZeneca's shot reduced the risk of hospitalization from COVID-19 by 94%. Pfizer's shot was found to cut the risk by 85%.

That is good news for South Korea, which will commence AstraZeneca injections on Friday.

"Finally, we will start vaccinations this week," President Moon Jae-in told senior secretaries on Monday. "We will make sure that residents and workers at senior care centers will get vaccines quickly and safely." A park in Seoul on Feb. 21: South Korea is poised to begin coronavirus vaccinations this week.   © Reuters

The initial plan is to inject 272,000 residents and workers at nursing homes who are under age 65. The country is holding off on using AstraZeneca shots for seniors aged 65 and up until health authorities confirm its effectiveness on the age group.

In March, 354,000 workers at general hospitals are due to take the AstraZeneca vaccine, followed by 78,000 health officials.

Seoul says it is starting mainly with AstraZeneca because it was the first drugmaker with which the authorities reached an agreement. The government entered talks with the company when it raced ahead in development last year, and the first supply will come from an SK Bioscience factory in Andong, South Korea, which produces the vaccines under contract.

Also pinning hopes on AstraZeneca is Vietnam, which expects to receive 30 million doses this year through COVAX. Reuters reported that its first batch of 117,000 doses arrived in Ho Chi Minh City on Wednesday, on a flight from South Korea. Inoculations are expected to start in March after quality checks.

Underscoring the diversity of Asia's vaccine acquisition drive, Vietnam is also in line for 50 million doses of the Sputnik V shot developed by Russia's Gamaleya Research Institute, according to data compiled by Duke University.

Additional reporting by Masayuki Yuda in Bangkok and Kim Jaewon in Seoul.