KUALA LUMPUR -- In normal times, passersby would assume Karupiah Rangan had hung his white dhoti up to dry. But when the factory worker raised the traditional Indian sarong outside his wooden house this week, it was a plea for help.

Karupiah, 54, joined thousands of Malaysians seeking aid by displaying the international symbol of surrender. These people are telling the world they have lost the battle for financial survival through the various COVID-19 restrictions imposed since March 2020.

A year and a half into the pandemic, the country of about 32 million people is now fighting one of the region's most serious outbreaks. Despite a nationwide "total lockdown" imposed on June 1 and extended indefinitely, daily cases have climbed back above 6,000 after briefly dropping below 5,000, keeping the health system under intense pressure.

Per million people in the population, Malaysia's seven-day average of more than 190 daily cases exceeds the rate of over 80 in devastated Indonesia, according to the statistics website Our World in Data.

For the government of Prime Minister Muhyiddin Yassin, the crisis poses a grave test. For Karupiah and others like him, it is all too much to bear.

"We have been eating rice porridge for 10 days now," Karupiah said at his home on the edge of Kuala Lumpur's neighboring Selangor state. 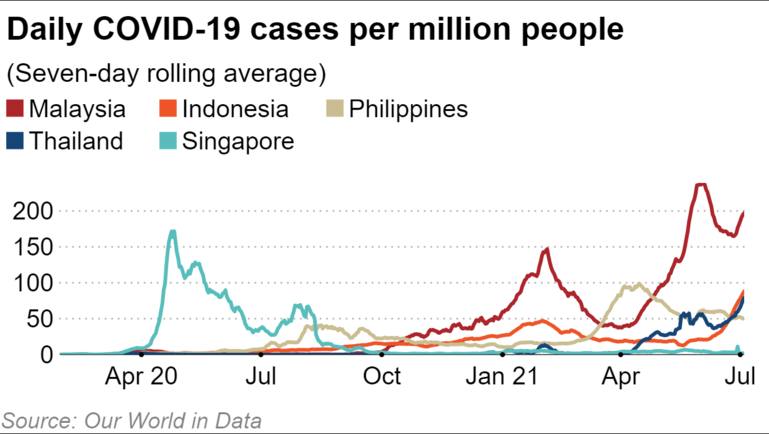 Karupiah was the sole breadwinner for his family of six, including his ailing mother and cancer-surviving wife. He had been a production line leader at a garment plant in Rawang, about 32 km from the capital. The company decided to cease operations due to the lockdown, which prohibits non-essential factories from operating.

Without Karupiah's monthly salary of 2,300 ringgit ($553), the family is depending on public welfare while he shuttles between operational factories and oil palm estates in search of another job.

Many have given up. Malaysia recorded 468 suicides in the first five months of 2021, compared with 631 for all of last year. Health Director-General Noor Hisham Abdullah last week acknowledged the toll the pandemic has taken on mental health around the world, including in Malaysia, and warned some individuals are at high risk of depression and other conditions due to overwhelming stress and isolation.

While restrictions have been eased at times, the country has not seen a full economic reopening since the first curbs were put in place in March 2020. Gross domestic product shrank 5.6% in 2020 and 0.5% in the first quarter of 2021.

Only five secondary states entered the second phase of the government's recovery plan on Monday, allowing the resumption of certain economic sectors. On the other hand, parts of Kuala Lumpur and Selangor came under even tighter restrictions over the weekend, including an 8 p.m. curfew.

To ease the pain, Muhyiddin's government has dished out almost 500 billion ringgit ($125 billion) in economic stimulus packages throughout the pandemic, including 150 billion ringgit worth of handouts and other measures announced last week.

Nevertheless, the white flags make the suffering on the ground all too apparent. Non-governmental organizations and some good Samaritans have been on the lookout for houses with the flags, delivering groceries and basic essentials.

"The cry for help we are receiving every day is just overwhelming, especially with the indefinite extension of [the full movement control order]," Makan Kongsi 2.0, a group that helps poor families and marginalized people, wrote on Facebook. The organization says it has raised almost $100,000 to date and helped over 21,000 beneficiaries nationwide.

"Most of them are retrenched workers and a few of them include elderly couples who were doing small businesses before this," said one of its volunteers, who did not want to be named.

Some politicians have frowned upon the white flag movement, apparently taking it as criticism of official failings. But celebrities and supermarkets have responded by supporting food banks and launching crowdfunding efforts.

It remains to be seen how much the grim conditions will affect the government politically, with parliament due to reopen on July 26 after a long emergency suspension. The stoppage has shielded Muhyiddin from direct opposition challenges over his handling of the pandemic and questions over how much legislative support he actually commands.

As for public opinion, one poll by the Merdeka Center for Opinion Research in April gave Muhyiddin a 67% approval rating, but that was before the worst of the latest coronavirus wave.

Economically and politically -- not to mention matters of life and death -- much depends on the country's vaccination drive. Malaysia is working to accelerate the inoculations under a four-phased plan that calls for a full recovery by the end of the year.

Officials aim to increase daily shots to 300,000 this month, up from about 200,000, as 12 million additional doses arrive in July alone. Among them are 1 million doses of AstraZeneca vaccines from Japan and another 1 million Pfizer doses from the U.S., which arrived on Monday.

About 6.4 million Malaysians had been inoculated as of Monday, 2.6 million of whom had completed their double doses -- a full immunization rate of roughly 8%. Malaysia is expected to receive the one-shot CanSino vaccine, made in China, later this month as well.

Malaysia hopes wider inoculations will begin to stem the tide of active cases, which now stand at about 70,000. All told, the country has recorded over 785,000 infections and 5,500 deaths.