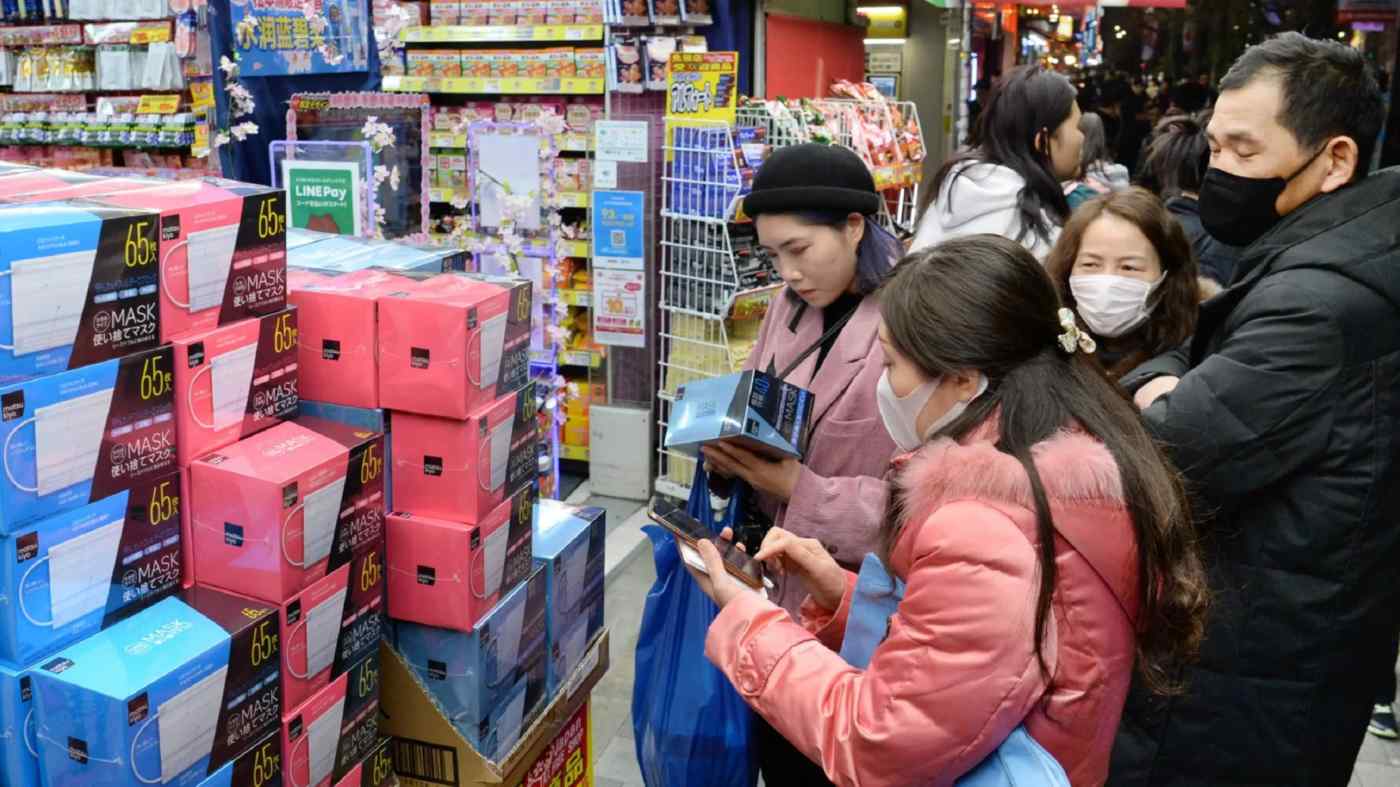 TOKYO -- Will wearing a surgical mask help protect against the new coronavirus that originated in the central Chinese city of Wuhan and has so far killed more than 80 people?

"Masks do not have the preventive effect people might expect," Satoshi Hori, Professor of Infection Control Science at Juntendo University in Tokyo, told the Nikkei Asian Review. "Wearing a mask works to help prevent patients with the virus from spreading it, as it blocks the dispersal of droplets containing the virus."

Wearing gloves won't help much either, said Professor Hori, because people wearing gloves who touch a contaminated surface such as door handles, can still spread the virus. They can also contract the virus if they touch their eyes or mouth with a gloved hand.

"Washing your hands with soap, or using rubbing alcohol, is more important and is supported by scientific evidence," he said.

Scientific evidence is one thing, but the wisdom crowds is another, with panicked consumers driving gallopping demand for surgical masks that has left manufacturers scrambling.

According to Japan's top mask maker Unicharm, in addition to making more masks at its domestic factories -- Unicharm began round-the-clock operation last week -- the company has also asked its suppliers in China to ramp up production. Coronavirus: How the outbreak unfolded from Jan. 27 to Feb. 1

Since the first case of coronavirus in Japan was confirmed, Unicharm said it has been flooded with orders for masks from drugstores and other retailers. According to the company orders temporarily topped 10 times the normal level and remained three times higher than usual through last week.

Unicharm offers a range of high-quality face masks, including "Cho-kaiteki," or super comfy, masks, which promise to be very comfortable to wear, and "Cho-rittai," or super three-dimensional, masks, which feature a "super 3D fit" that shapes to the user's face without leaving gaps, but also stops the mask from sticking to the user's mouth.

Unicharm, which plans to continue increased production levels through to the end of January, said it had also decided to increase production of alcohol wet wipes in several domestic factories in response to surging demand.

Another Japanese mask manufacturer, Kowa, which is based in Nagoya, said it had also lifted production at its domestic plants. "We can't meet demand, we are getting so many orders and production cannot catch up."

Orders for masks are also surging at cross-border e-commerce sites such as Raccoon Holdings which said that shipments of masks at "SD export," a cross-border B2B e-commerce site operated by a subsidiary, had skyrocketed by a multiple of 56 times during the first 20 days of this month.

The company attributed the explosive growth in sales to soaring demand for masks in China as consumers emptied out stock in stores in a race to protect themselves from the deadly coronavirus.

"Previously, the most popular mask products were those for kids and for use during sleep, but now demand has shifted to surgical masks," according to a Raccoon Holdings executive.

The SD export site offered 480 types of masts as of Jan. 15, but the number has declined to around 360 as many kinds have been sold out.

Since the start of January, Hong Kong accounted for some 90% of the orders for masks placed through the site, compared to 50% in January last year and around 20% in December.

Many of the masks purchased through the site from Hong Kong are shipped to the mainland China, the company said, while sales of other anti-virus products, including sterilization sheets, were also on the rise.

Hakugen Earth, a maker of insecticides, insect repellents and deodorants, is also basking in rising sales of masks to customers in China through cross-border e-commerce sites.

Usually, the company said, daily sales of its masks through T-Mall Global and other similar platforms numbered in the tens of thousands. But on January 22 alone Hakugen Earth sold 4 million surgical masks.

"This may be a one-shot jump, but if demand remains so strong we will have to review our supplies," a Hakugen Earth executive told Nikkei.

Sales of the company's masks at brick-and-mortar stores are also beginning to pick up, prompting wholesalers and retailers to ramp up their purchases. The spreading epidemic is also stoking demand for general-use face masks manufactured by 3M Japan.

According to Nikkei's point-of-sales database, tallying sales figures at over 1,500 retail outlets across Japan, the average price of five leading mask brands has risen 2.43% compared to a year ago. Average mask prices price rose a further 1.98% to 417.1 yen on January 13 compared to the previous week.

Chow Gu, a 31-year-old tourist from Shanghai, China, snapped up 10 packets of masks soon after entering a Tomod's drugstore outlet in Tokyo's glitzy Ginza district around 9am last Friday.

"Chinese news reports were recommending wearing surgical masks," Chow told Nikkei, "and I'm going back to my hometown today, so these masks give me peace of mind."

Another Chinese traveler in her 30s picked up three or four packs at the same drugstore.

"I came here as soon as I woke up this morning because I wanted to get some for my parents and friends so I can give these to them during the Lunar New Year holiday," said the woman, who decline to give her name,

A woman in her 30s, who was here with her husband and daughter, said: "We changed our travel schedule and decided we had to go and get surgical masks because we heard masks are nearly completely out of stock where we live."

Many Chinese shoppers are picking up high-performance masks that are believed to be more effective in protecting against the virus, especially ones that comply with the "N95," particulate-filtering respirator standard set by the U.S. National Institute for Occupational Safety and Health.

"Ninety percent of the customers who bought surgical masks were Chinese," Yuki Oya, manager of the Tomod's Ginza outlet said. "We sold 350 packs each on Thursday and Friday."