Mask shortage in Japan to linger despite Abe's production push 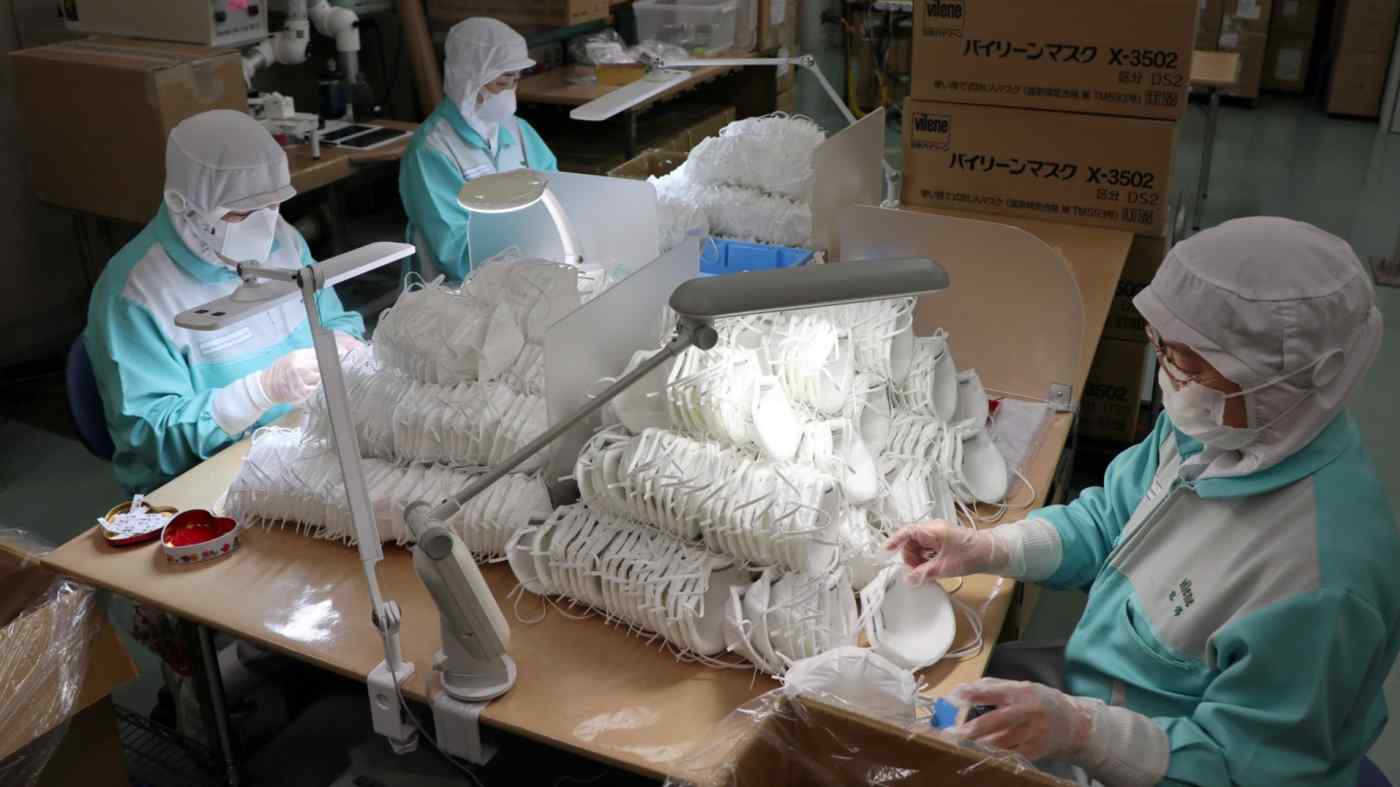 TOKYO -- Japanese stores have been stripped bare of medical masks as the new coronavirus spreads in the country, while Prime Minister Shinzo Abe's push for a nationwide supply of 600 million this month faces obstacles both foreign and domestic.

Not only does Japan depend heavily on China -- the epicenter of the outbreak -- for its procurement of masks, but smaller producers of medical supplies remain reluctant to buy additional equipment and facilities needed to boost output despite new subsidies offered by the Japanese government.

In mid-February, Japan forecast that weekly mask supplies would rise to 100 million as manufacturers accelerated production and operated factories around the clock. Many Japanese people allergic to pollen already wear masks at this time of year, and the weekly target represented double or triple the usual supply.

Some companies are bolstering production, with nonwoven materials maker Japan Vilene moving to boost output by more than 50%. Yet this does little to offset the shortages.

Only 20% of the 5.5 billion masks shipped in Japan during fiscal 2018 were domestically made, while 70% came from Chinese suppliers, the Japan Hygiene Products Industry Association says.

Koyo Trade, a manufacturer of protective gear in Shiga Prefecture, said the Chinese factory to which it outsources manufacturing will have no masks for shipment to Japan until the end of June.

Raccoon, an international e-commerce wholesale platform operator, reports that overseas sales of masks in early to mid-February skyrocketed by a factor of more than 40 from a year earlier.

Manufacturers are averse to committing to new investments for boosting output.

A pledge by Japan's Ministry of Economy, Trade and Industry to provide subsidies up to 30 million yen ($278,000) to those investing in equipment and facilities drew "quite a number of inquiries," one official said. Yet the ministry has made arrangements with just three companies thus far, including a small manufacturer in Ishikawa Prefecture.

Most mask makers in Japan are midsize or smaller, and cannot afford additional investments solely to accommodate what could be a temporary spike in demand.

The subsidy program is not "user-friendly," an executive at a different manufacturer said, noting that recipients are required to install new equipment by the end of March.

Household products giant Unicharm has run operations around the clock to churn out nearly 25 million masks a week, twice as many as usual, with plans to boost output another 10 million units by April. But the Japanese company is using previously idle facilities because "deploying new equipment will take close to a year," President Takahisa Takahara said.

The country's chronic labor crunch is also to blame. Koken, a Tokyo hygiene gear producer, hired about 10 night-shift workers for a two-month term at its factory in nearby Kanagawa Prefecture. But "training takes time," a company official said. Unicharm scrambled to gather staff from sanitary pad, diaper and other segments to handle the mask output.

Though domestic supplies have now reached roughly 100 million a week, that still falls short of Abe's goal to provide 600 million masks in March.

Some companies have answered the government's call, including those outside of the medical supplies industry. Electronics behemoth Sharp said it will start making surgical masks next month, using clean rooms originally designed for making liquid crystal displays.

But "it's not clear if 600 million masks are enough," said an official at the hygiene products trade group.