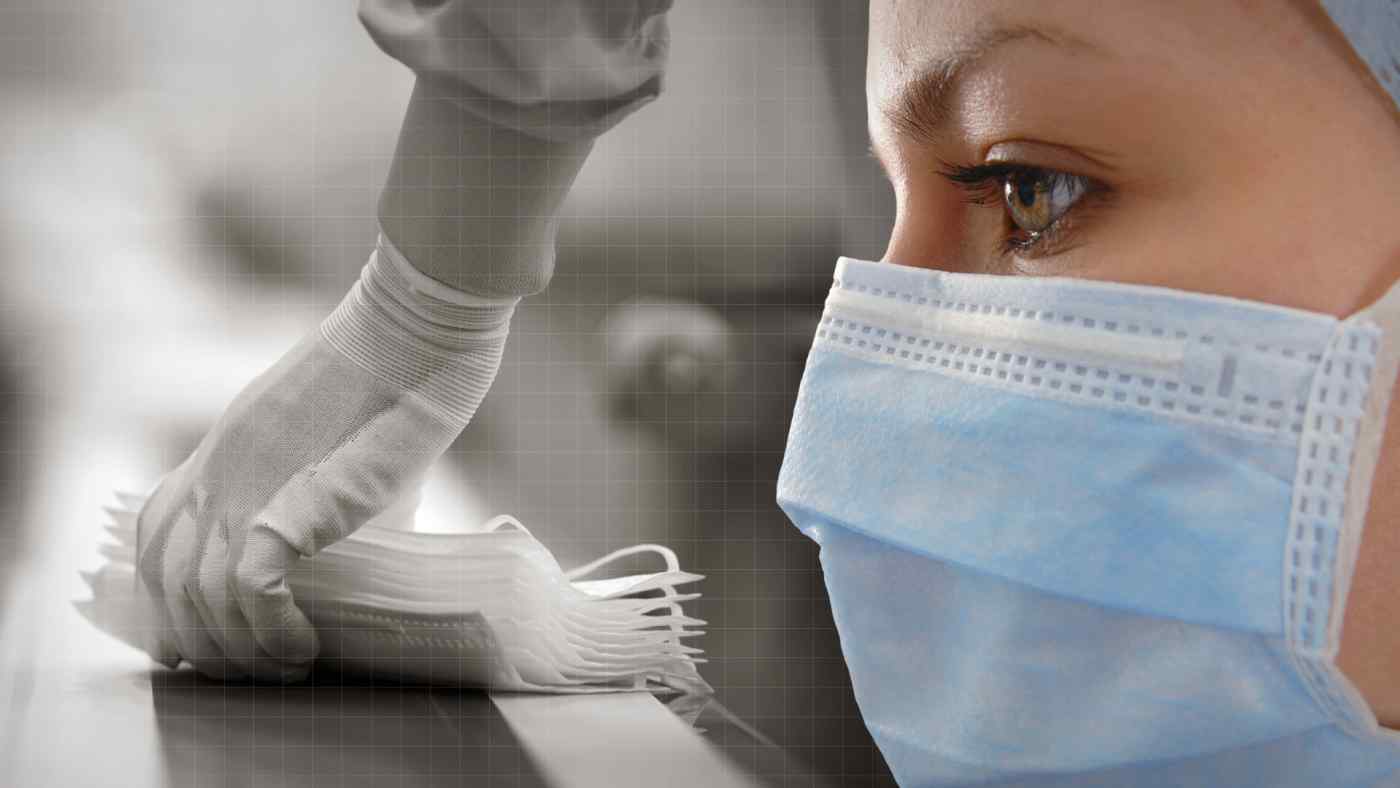 NEW YORK -- The U.S. is facing a potentially severe shortage of surgical masks due to the coronavirus outbreak in China, despite repeated warnings that American hospitals are overly dependent on Chinese-made medical supplies.

While the coronavirus has caused just 12 confirmed cases in the U.S., the country sources the bulk of its surgical masks, respirators and other "personal protective equipment" from China, where the disease has infected tens of thousands.

The epidemic has not only disrupted mask production in the country, it has also sent China's own demand for medical supplies soaring.

Now hospitals in the U.S. are having to ration their inventory amid one of the worst flu seasons in decades.

Last week, staff at Mt. Sinai Health Systems received an email informing them that, among other measures, surgical masks will only be available in departments such as intensive care units, divisions involved in infection prevention and emergency departments, according to a person familiar with the matter.

It was a similar situation two states away, where a pediatric doctor practicing in Maryland said the hospital is unable to receive more shipments of masks.

"It's an issue because I need to wear a mask every time I go into a patient's room and I can't reuse a mask from one room to another. I've probably used 10 masks today, at least," the doctor said.

"We joked earlier today that they would have the medical students cover the surgeons' mouths in the operating room with their hands. [I'm] not sure what the options would be."

It is a situation that mask manufacturers in the country have been warning about for years.

"I have been preaching that you're going to have an outage, a total collapse of the U.S. mask supply, and it's like I'm talking Greek," said Mike Bowen, the founder of Prestige Ameritch, a Texas-based medical supply maker.

"I've sent thousands of emails, I've been in hundreds of meetings, I've talked to politicians and hospital administrators, hospital purchasing people. ... They don't believe me. And now they're seeing that I was right."

Over 90% of the personal protective equipment used in the U.S. is made overseas, with China as the biggest supplier, according to the Department of Health and Human Services.

But since the coronavirus broke out, the Chinese government has directed factories producing these items to prioritize domestic demand.

"For the time being, all of our production in China is going to the local market," said Ronald Rueben, CEO of Medicom, a mask manufacturer with factories in the U.S., Europe and Asia. "That has been mandated. We're ensuring that frontline health care workers are provided with as many as we can manufacture."

This means "made in China" is now also "used in China."

That is bad news for staff at Mt. Sinai and other U.S. hospitals, particularly as they head into the peak of the flu season.

"Until the numbers decrease in China, potentially, we may not get a lot [of masks]," said Dr. Bernard Camins, medical director of infection prevention at Mt. Sinai. "There're some other countries that make them, but because now this is a worldwide problem, we'll have some issues," he added. "We were able to order some N95 respirators ... [but] we actually are not sure if we have enough."

Mt. Sinai has already contacted the New York state health department about accessing its emergency supply of masks. According to Camins, the group's eight hospitals use over 110,000 masks every month during flu season.

Other hospitals are also concerned.

"We have seen backorders on both surgical masks and N95 masks. Our supply chain and materials management experts have worked very hard to try to identify which products are sourced from China and are trying to identify alternative opportunities for supplies," said Michael Morrison, director of media relations at the Massachusetts General Hospital.

"So far, we have sufficient supplies to support our clinical operations, but we're looking cautiously to the future with the outbreak potentially spreading and identifying how we would need to adjust if the supplies decrease further," he added.

Officials are also keeping a close eye on local mask supplies. Nikkei sent inquires to all 50 state health departments. Out of the 33 that responded, 18 departments said they are aware of concerns of possible shortages and have put emergency procedures in place, including California, Illinois, Michigan, New York and Virginia.

"Nationally, we're at an 80% allocation rate. This means that if you normally order 100 masks you would get 80," said Jessica Baggett, public information officer at the Washington State Department of Health. "We're in contact with our partners at the [Center for Disease Control] as they're addressing the national shortage by working with supply chain vendors to coordinate resources."

The New York Department of Health said it has heard some hospitals are "experiencing shortages of PPE including N95 respirators." The state has made its emergency stockpile available to hospitals in need upon request.

The CDC, FDA and Department of Defense did not immediately respond to request for comments.

Among the public, fear of the virus has sparked bulk buying of medical- and nonmedical-grade face masks, despite doubts over the latter's effectiveness in blocking the disease.

Much of the demand is from people buying masks to send back to families in China or donate to their home cities.

Prestige Ameritech said it has begun selling surgical masks to consumers for the first time due to the coronavirus.

"We were getting phone calls from Chinese Americans who wanted to send products home ... so we told them to go to our website, and then we started getting hundreds of orders just immediately," Bowen said. "It's very touching. ... We're not just in this for the money. Every time somebody with a Chinese surname orders a product, I'm inspired."

In just 10 days, he said, he had sold over a million masks bound for China.

On a smaller scale, shops and drug stores are also seeing a surge in demand.

In Flushing, a New York neighborhood with a high density of Chinese immigrants, shop owners are selling out the last of their inventory, and some have put up signs in Chinese reading, "Masks Sold Out."

On one street corners, a man called "Doc" had set up a table and was attempting, sometimes in broken Mandarin, to sell masks to passersby. He had regular masks, waterproof masks and N95 respirators, but Doc said one man had come by earlier and bought up all of his regular masks.

When asked where he gets his stock, Doc was circumspect. "Let's just say people who have them and want to sell them found me," he told Nikkei.

U.S. mask makers, meanwhile, are being called on to fill the gap left by the surge in Chinese demand.

"Global demand for supplies used to treat and help protect people, such as respirators, is currently exceeding supply," said Jennifer Ehrlich, communications manager at 3M, a medical supply giant. "3M is ramping up production at its manufacturing facilities around the world including in the U.S., Asia and Europe, as quickly as possible."

Honeywell, Medline and Cardinal Health told Nikkei they are taking a similar steps.

But for many manufacturers, expanding production is too risky.

Bowen said his company did that 10 years ago during the H1N1 pandemic and ended up getting burned. After investing heavily into expansion in the expectation that it would keep half of its new hospital clients, only 5% stayed with the company after the outbreak because U.S.-made masks are more expensive.

"[They] lied and they all went back to the foreign masks," Bowen said. "We laid off 150 people and came very close to going out of business. So we're not going to gear up unless somebody comes to us and say, 'Hey, I'll sign a five-year contract.'"

Medicom's Reuben said production is under a big strain, because not only masks but also most of the supplies for making them come from China.

Reuben is increasing capacity at all of his factories, but the climbing costs have become a heavy burden, he said.

"Our costs have gone up significantly, more than doubled," Reuben told Nikkei. "We're paying double time on labor, in some cases triple, [and] we have weekend shifts." The cost of sourcing materials from Europe is also higher, he said.

Medicom has raised some mask prices, though it cannot do so in other cases because it is locked into long-term contracts.

The U.S. Food and Drug Administration is expediting the license application process for companies who make masks, moving them "to the front of the queue," according to a government source who asked not to be named. FDA is also focusing a bit more on fraudulent products because of the outbreak.

New companies are rushing to the mask market due to the high demand, but Reuben said few are able to meet the required standards.

And once the coronavirus outbreak ends, a large surplus of masks will likely cause prices to crater.

"It's extremely disruptive," Reuben said. "What you gain now, you will lose later."

He pointed to a similar situation in 1988, when demand for medical gloves skyrocketed during the AIDS pandemic. The market was flooded with inferior products and it took years for the industry to return to normal, he said.

Bowen, meanwhile, is frustrated at the late response.

"It's too late to fix it," he said. "[Increasing production] is a drop in the ocean. It's too little. ... China is so big and there're so many people, their demand is so high that nothing can quench it."