Modi buried under avalanche of COVID-19 cases and 120m jobless 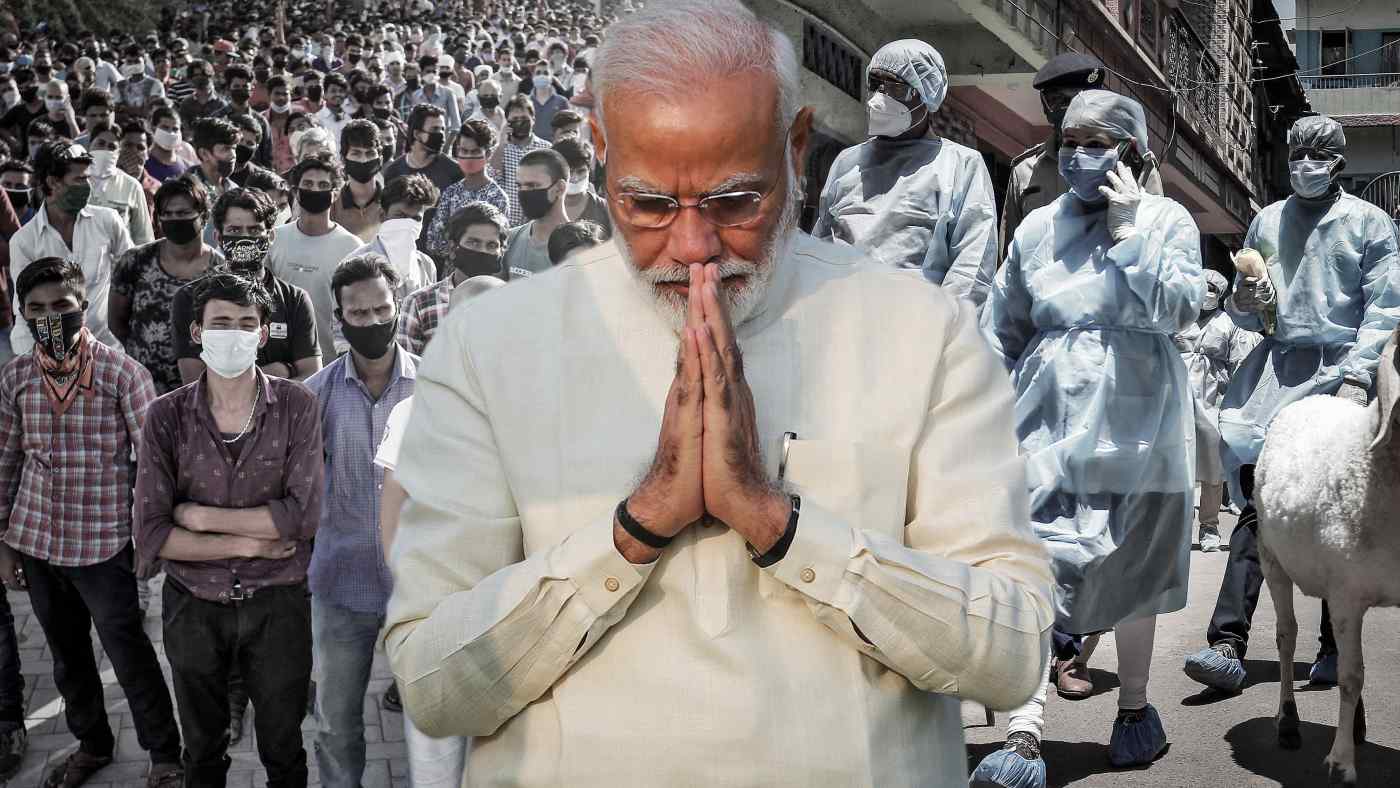 NEW DELHI -- India has seen a sharp spike in new coronavirus cases with the total crossing 125,000, about 70% of which surfaced in this month alone. This has forced Prime Minister Narendra Modi's government to review its strategy to contain the outbreak, which has shocked an already slowing economy, adding to joblessness and despair.

A high-level ministerial meeting chaired by Health Minister Harsh Vardhan on May 15 discussed focusing COVID-19 management on the states having the highest number of cases and fatalities, as well as on treatment, "for which timely detection of infection and contact tracing [are] the best way forward," an official statement said.

As part of this, the government is now closely monitoring the 30 municipal areas that constitute nearly 80% of India's caseload, including those in the capital of Delhi and western states of Maharashtra and Gujarat, Modi's home state.

The country has been under lockdown since March. Stay-at-home orders have been extended three times, the latest until May 31. Some easing has allowed the country to partially reopen, including limited public transport services.

New Delhi looks confident. "We've put a lot of effort into prevention, containment and management of cases," Lav Agarwal, a joint secretary in the health ministry, said on Wednesday. He added that, compared to the rest of the world where there are 62 cases per 100,000 people, India has only about eight. "Similarly, for mortality per 100,000 population, while the global average rate is 4.2, India's is 0.2." 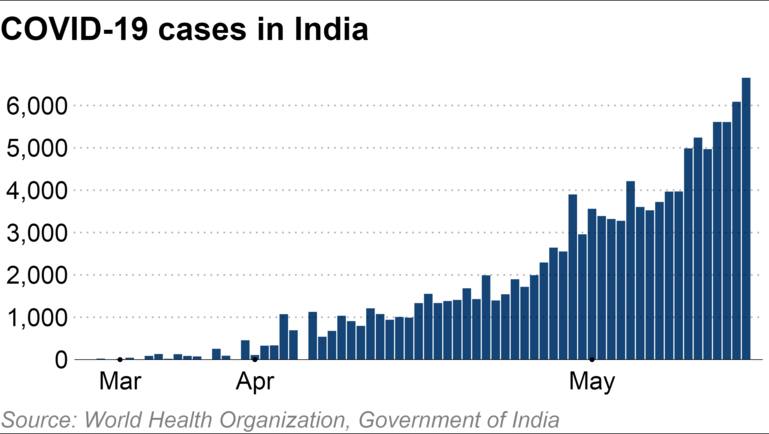 Since India's first case emerged on Jan. 30, the country has set up over 10,000 dedicated COVID-19 hospitals and care facilities, taking the number of testing laboratories from one to 555. The country has also stepped up manufacturing of virus-related items, producing 200,000 personal protective equipment kits and N95 masks daily.

Many, however, are less than sanguine. "Once the virus covers up to 30% of population, possibly in the next four to five months, the situation will become very difficult to handle with the limited resources," Ghanshyam Pangtey, professor in the medicine department at Lady Hardinge Medical College, told the Nikkei Asian Review. To avoid this, Pangtey hopes a vaccine will be developed soon.

"You cannot be under a lockdown forever," he added. "We need to take the middle path, allowing movement of people and economic activity wherever possible and enforcing containment strategies in the regions worst hit by COVID-19," he said. Relatives and health workers carry the body of a person who died from the coronavirus, before the burial at a graveyard in New Delhi, India, May 11.   © Reuters

In a bid to revive the economy, which was slumping even before being further battered by the virus-triggered lockdown, Modi on May 12 unveiled a stimulus package worth 20 trillion rupees ($265 billion), equivalent to 10% of the country's GDP, which, he said, was aimed at helping smaller businesses, laborers, farmers and middle-income earners.

Research company Capital Economics said in a May 18 note the package largely focused on providing liquidity and loan guarantees to small and midsize enterprises and non-banking finance companies. But it included only a small number of actual demand-boosting measures. "With the lockdown also being extended again, a steep fall in output this year is certain."

Separately, Goldman Sachs said India's economy is likely to contract by a massive 45% in the April-June quarter from the previous three months on an annualized basis, and by 5% for the whole of the current financial year lasting until March 2021. "The -5% growth we forecast for [the year through March 2021] would be deeper compared to all 'recessions' India has ever experienced," it said in a May 17 note.

Adding to the misery is the growing unemployment, with daily-wage earning migrant laborers among the worst hit. They started losing jobs as construction sites shut down, forcing tens of thousands to abandon cities and walk to hometowns and villages -- some hundreds of kilometers away -- in the absence of money and public transport, reflecting their level of despair.

More than 120 million workers in India, most of them small traders and daily wage earners, were out of jobs last month, according to Mumbai-based think tank Centre for Monitoring Indian Economy, whose data shows that unemployment skyrocketed to 23.5% in April from 8.7% in March. Migrant workers and their families wait for transport to a railway station in Ahmedabad on May 15. They were on their way home after India's giant rail network partially opened following a nearly seven-week lockdown.   © Reuters

Vasu Dhariwal, a hairdresser at a high-end salon in New Delhi, says his workplace was shut a few days before the lockdown and he does not know when it will reopen.

"I didn't get a full salary for March and none for the month of April," said Dhariwal, who lives with his wife, child, parents and younger brother. "I'm the only wage earner of the family and also paying a monthly house loan of 16,000 rupees. It'll be very difficult for me to manage the household if I remain out of work longer."

Meanwhile, the ongoing Indian lockdown may also affect Bhutan, Nepal and the Maldives, as New Delhi supplies essentials such as food grains, medicines and petroleum products to its smaller neighbors, where India is vying with China for influence.

Besides, India is among the largest suppliers of migrant workforce to the Middle East, with nine million of its citizens employed in the region. If it is unable to flatten the COVID-19 curve fast, Gulf countries may be off-limits to Indian labor.

One solution for India, according to Sunil Kumar Sinha, principal economist at India Ratings and Research, is to tap an upcoming opportunity to create jobs as the pandemic changes the global economy. "A lot of companies operating out of China will now start thinking in terms of relocation, and India is a fairly attractive place."

"It all depends on how quickly the government can roll out a red carpet to these companies and turn India into a manufacturing hub," he said, adding this will not only take care of future employment but will also help the government achieve its objective of increasing manufacturing to 25% of GDP from the current 18%.