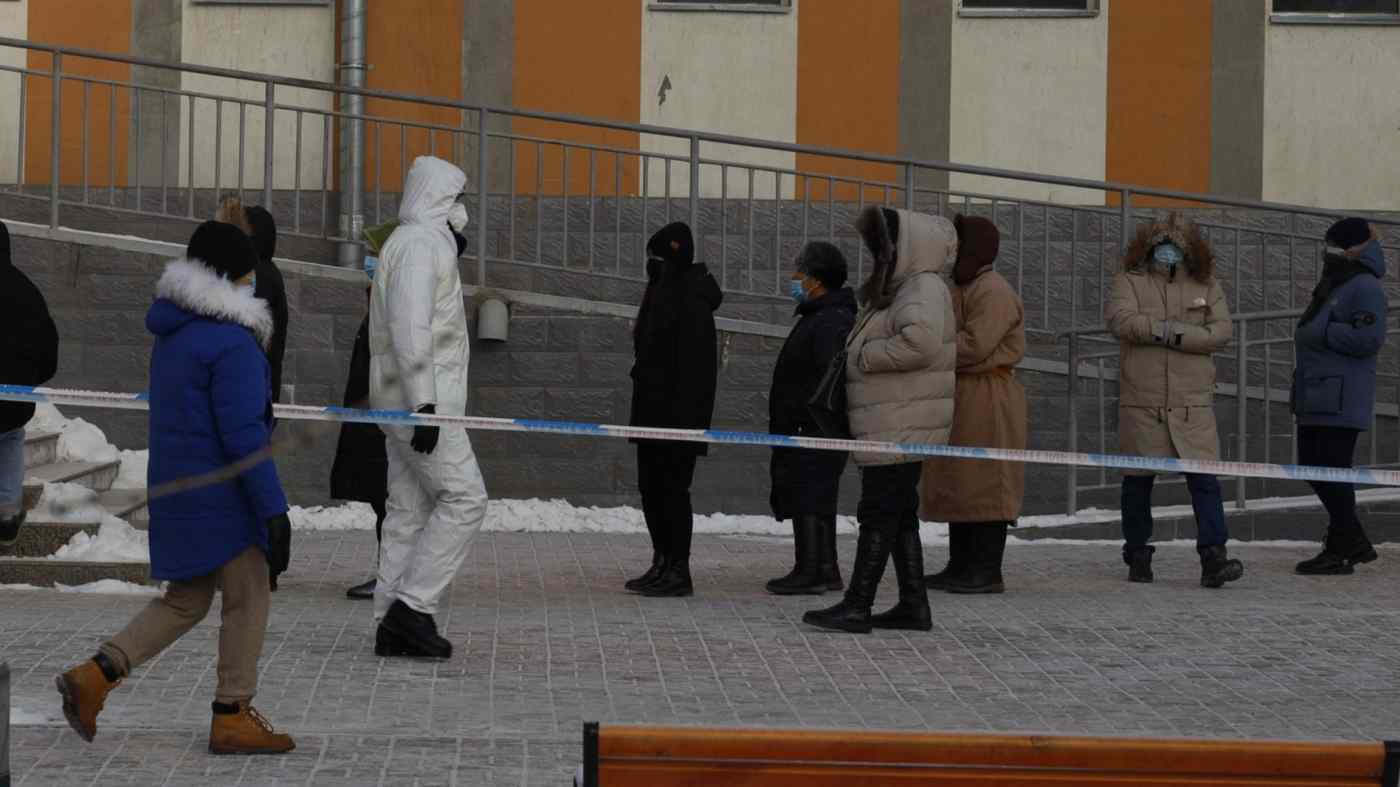 Mongolians stand in an hourslong line in bitter cold to get tested for COVID-19 in order to leave Ulaanbaatar and return to their native provinces. (Photo by Anand Tumurtogoo)
KHALIUN BAYARTSOGT, Contributing writerDecember 16, 2020 12:04 JST | Mongolia
CopyCopied

ULAANBAATAR -- Just a month ago Mongolia was free of COVID-19. Children were in school, public gatherings such as conferences, concerts and sports events were allowed -- it was as if the virus didn't exist. Mongolians had stopped wearing masks as summer came, and social distancing was nonexistent.

All that changed on Nov. 11, when the first domestic transmission of the virus was reported in the Central Asian nation sandwiched between China and Russia. A truck driver who had transported goods from Russia to Mongolia tested positive four days after he left a 21-day quarantine facility. Since then, more than 100 have tested positive in the capital city, Ulaanbaatar, and 300 in rural areas.

"It was always inevitable, although we delayed it by 10 months," said Mandakhnaran Davaadorj, an immunologist and professor at the Mongolian National University of Medical Sciences. He had been trying to remind the public to stay vigilant, noting that many had relaxed their guard in the months after the country identified its first imported COVID-19 case in March.

"People at that time were on heightened alert for COVID-19, and people followed mandatory mask-wearing and sanitizing their hands," he said. Social distancing measures in March hurt the economy in the nation of 3 million people, and restaurants, cafes and bars closed their doors, resulting in significant drops in their revenues.

Now, in the face of the emergence of the virus in November, officials hope that a national lockdown will stop transmissions once and for all. Mongolia has managed to test over 500,000 people, including mandatory testing of one member of each household.

As a result, domestic transmissions from Nov. 11 to Dec. 8 stood at 464, with 453 imported cases since January, totaling 917 for the country. The national lockdown started on Nov. 12 and was supposed to end on Dec. 1 but was extended until Dec. 11.

The lockdown eased on Monday as daily cases dropped to less than 10. People are now allowed go back to work, but not to schools, training centers, shopping malls or hotels. In fact, all types of public gatherings are banned. It took Mongolia a week to organize Ulaanbaatar testing centers and schedule appointments through a registration site, and then the website kept crashing. (Photo by Anand Tumurtogoo)

Small and medium-size enterprises are facing the brunt of the lockdown because no direct aid was given to businesses.

Otgonlkham Rinchin, founder of a traditional luxury costume designer house, has been struggling with less revenue all year. The designer's company, which sells clothes under the brand Rinchin Yesui, depends largely on sales during the traditional holidays of the Lunar New Year and the summer Naadam festival but failed to make a profit during the festive seasons this year.

"I don't know how to pay the salaries for my workers in December. Just now, I already gave everything I had for rent and salaries for November," said Otgonlkham, who employs seven workers.

Nomintsetseg Bold, an owner of eight bubble tea shops, worries that her supplies will go bad during the lockdown and has no idea how she will pay the rents for her shops. "I don't want to lose any of my branches. I opened them with a loan from the bank," she said.

Prime Minister Khurelsukh Ukhnaa on Sunday announced that his government will pay water and electricity bills for all businesses and households until July. The government has also made it clear that there will be no regulation of rents, though Khurelsukh's cabinet did manage to negotiate with banks to delay loan payments.

The government is also making efforts to save mineral exports to China, its main source of revenue. Although the ministry for mining declared that mineral-rich Umnugobi Province will be a virus-free green zone with massive testing, daily crossings of coal trucks at one point decreased from 1,200 to 150, before bouncing back to above 300 this week. This came after Chinese customs required drivers to show negative test results.

The government has installed a second PCR testing device in the province and has tested 4,500 of the 6,000 coal truck drivers so far. It is also working to test residents of the province.

On Nov. 21, the National Emergency Commission announced a plan to test all who needed to leave Ulaanbaatar. It took another week to organize the testing centers and schedule appointments through a registration site.

However, not all test applicants could register because the website kept crashing. "The website doesn't work. I've been trying to register my drivers for the last four days," said Oyunchimeg Tsegmid, who rents her tank trucks for transporting gasoline to mining companies. Her operations have been halted because her drivers can't leave Ulaanbaatar without a COVID-19 test.

Many Mongolians are expressing their frustration over the impromptu nature of many of the lockdown measures that have been implemented.

After the lockdown was imposed, food delivery trucks were suddenly forced to deliver goods to stores after 10 p.m. even though there was no traffic during the lockdown. Some store workers and owners had to stay as late as 4 in the morning to receive their goods. Shortly after store owners started complaining, the authorities canceled the 10 p.m. requirement.

Sumiyabazar Dolgorsuren, a former wrestling champion who is the new mayor of Ulaanbaatar, has complained that he has been working without food or sleep, but citizens have started a petition for him to step down.

"Everybody is criticizing the sudden decisions, which were clearly not planned out," Munkhsoyol Baatarjav, economist and board member of National Labor Party told Nikkei. "The virus has spread around the world for 10 months now, but our officials are acting as if they are facing a brand-new virus. ... It's hard to tell if they really care about saving people from the pandemic, or they just care about saving their reputation more."