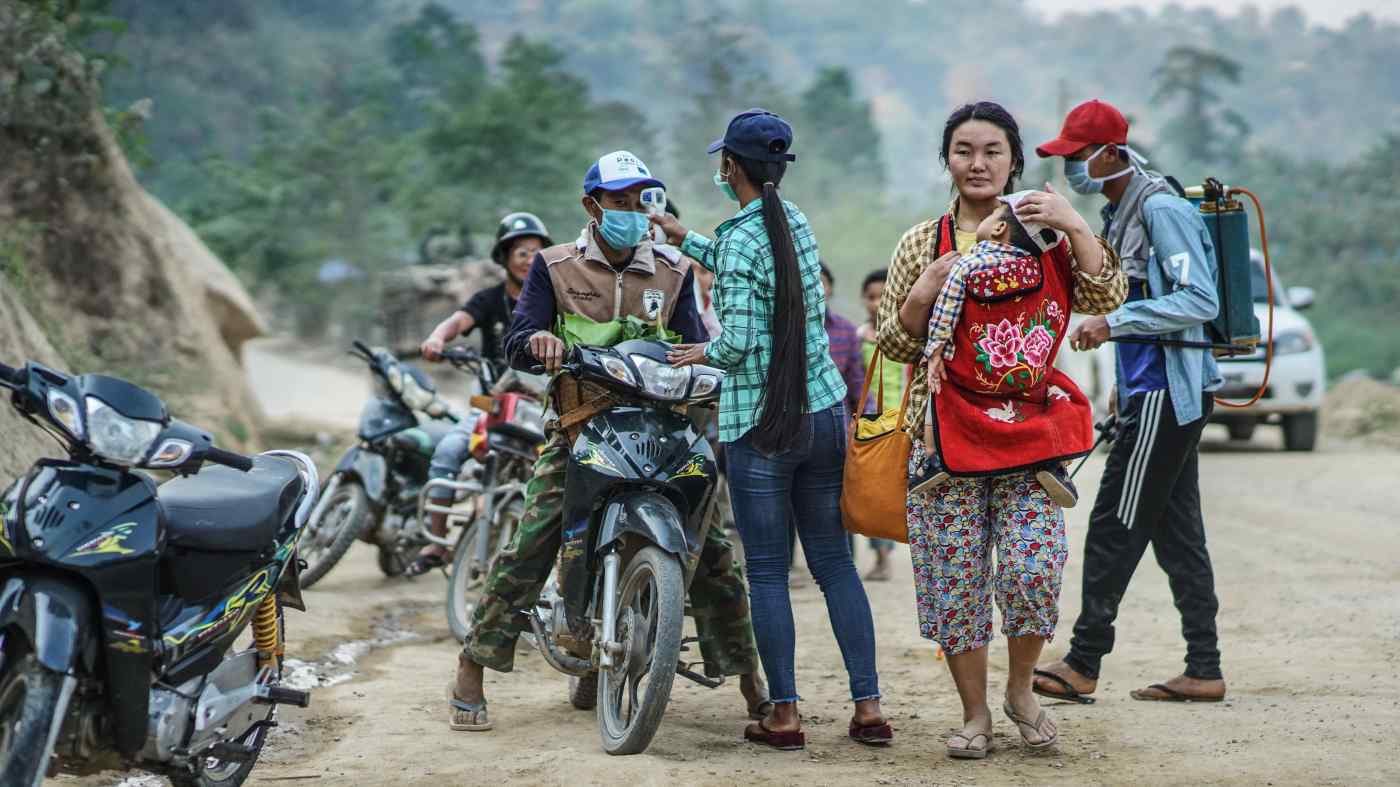 Until this week, the government had little or no contact with over a dozen armed groups, many of which are ranged along the borders with China and Thailand. Dissident minorities have so far been largely left to develop their own responses to the pandemic.

According to the United Nations, an estimated 107,000 Kachins are internally-displaced persons (IDPs), and living in 173 camps in the region. Myanmar's government has restricted humanitarian access to KIO-controlled areas for years.

In KIO-controlled areas, a possible COVID-19 contagion is of most concern among the IDPs. Living conditions in their camps are cramped and hygiene poor.

While the central government and the KIO have so far been siloed in their respective COVID-19 responses, China has given support to both sides 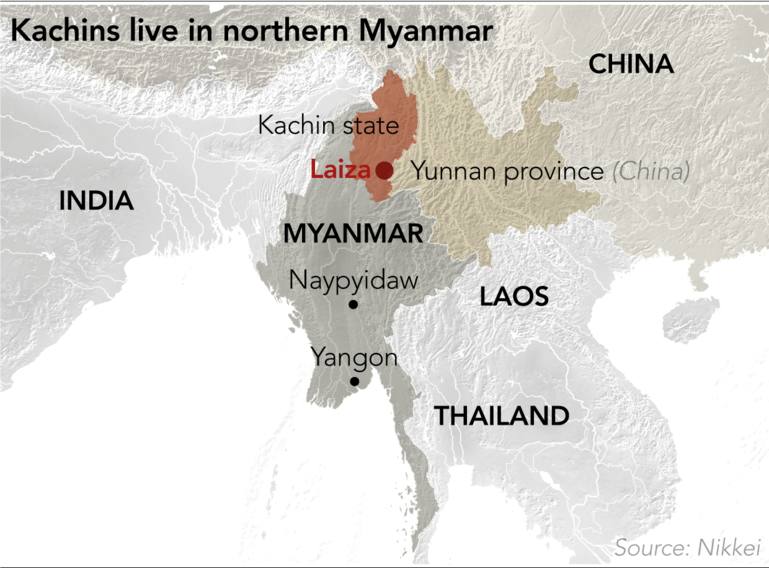 The KIO established a COVID-19 prevention committee on Feb. 7. Since mid-March, it has worked with local faith-based and non-governmental organizations to share public health information through banners, pamphlets, public address systems and radio announcements.

Dr Hing Wawm, the committee's secretary and head of the KIO's health department, told the Nikkei Asian Review on May 1 that travel restrictions have recently been imposed on people coming from cities and towns outside KIO areas. Social distancing and temperature-screening measures remain in place.

More than 200 handwashing stations have been placed at the entrances to IDP camps and in towns. Temperature-screening checkpoints have also been set up, quarantine areas created in bamboo huts, and movement in and out of camps restricted. In late March, the committee issued pandemic guidelines on matters such as large gatherings and business hours.

On Apr. 27, Myanmar's government finally announced a committee to engage with ethnic armed organizations to tackle the pandemic. Listed organizations, including the KIO, were asked to share information about their COVID-19 responses.

Hing Wawm said the KIO has responded to the Apr. 27 official request for information, but has yet to see a practical liaison plan.

By the start of the month, less than 8,000 people had been tested for COVID-19 in all Myanmar. Central authorities have so far confirmed only 150 cases, mostly in Yangon, the former capital and largest city.

No COVID-19 cases have yet been confirmed in KIO-controlled areas, and any that surface will be sent to a hospital near the headquarters in Laiza. According to Hing Wawm, the medical facility has ten ventilators and 50 ICU beds. He told Nikkei that there are also 1,500 sets of personal protective equipment and more than 1,000 rapid test kits procured from China and Singapore.

Hing Wawm said that communications with China began in February, and officials from there have visited Laiza to provide medical support. No official agreement is in place, however. The two parties "agreed verbally to work together," he said.

The cooperation includes sending specimens to China for laboratory testing. Nine tests in mid-April came back negative, and there have been no further suspected cases since.

China has also provided bilateral assistance to the Myanmar government. Chinese state media reported in early April that a medical team had been sent along with test kits, 60,000 masks and 5,500 sets of personal protective equipment. Towards the end of the month, medical personnel from the  People's Liberation Army helped the Myanmar military build and equip a COVID-19 testing laboratory.

"This pandemic gives China a chance to accelerate its engagement in Myanmar", Richard Horsey, an independent political analyst based in Yangon, told Nikkei. China can help Myanmar save lives, he said, while "other countries like Japan and India, who wish to balance China's influence in Myanmar, are currently facing challenges of their own."

Myanmar's location between China and India makes it strategically significant in China's Belt and Road Initiative. China has promoted numerous development projects in the country, including infrastructure that will give access to the Indian Ocean.

In mid-January, President Xi Jinping paid a state visit to Myanmar, and was received by State Counsellor Aung San Suu Kyi. Dozens of infrastructure deals were signed, and Myanmar's state media reported official willingness "to make joint efforts with China to safeguard the peace and stability in border areas."

Myanmar's ethnic insurgencies date back to 1948, shortly after Burma, as Myanmar was then known, gained independence from Britain. Peace talks over the years have produced spotty results. Several insurgent groups signed up to the Nationwide Ceasefire Agreement in 2015, but others like the KIA fought on. Thousands of internally displaced people in Kachin state are considered particularly vulnerable to the COVID-19 contagion. (Photo by Yawng Htang)

The official COVID-19 government response to the displaced in Kachin state includes raising awareness, hygiene assistance, and one-time cash assistance of 20,000 kyats ($14) for pregnant women, infants and the elderly. But this does not extend to KIO-controlled areas, a representative from the Ministry for Social Welfare, Relief and Resettlement told Nikkei on condition of anonymity.

Since June 2016, the Myanmar government has blocked UN agencies from delivering humanitarian assistance to KIO areas. Other humanitarian organizations have also been obstructed by denial of travel permits and the threat of arrest. Officially, assistance to outlawed groups such as the KIO is punishable by up to three years in prison.

"We target our assistance to internally displaced people and civilians," B. Esther Ze Naw of the Kachin Peace Network, a community organization helping displaced Kachins prepare for the virus, told Nikkei. "But we can be wrongly accused of being supporters of the Kachin Independence Army."

Humanitarian assistance has sometimes been provided from China, but at the end of March Yunnan's provincial government announced the sealing of its border. Anyone wishing to cross into Myanmar to provide aid must have official permission from China.

"COVID-19-related restrictions on movement across the Myanmar-Chinese border have further complicated the delivery of assistance to internally displaced people," said Aoife McDonnell from the United Nations High Commissioner for Refugees (UNHCR) office in Myanmar. "The solution is to allow humanitarian agencies, particularly local organizations, to deliver needed assistance ... directly from government-controlled to non-government controlled areas within Myanmar."

On March 23, UN Secretary General Antonio Guterres called for a global ceasefire to facilitate a unified front against COVID-19. Many in Myanmar have echoed this call, including ethnic armed groups, foreign diplomats, and civil society organizations.

Yet conflicts in some parts of Myanmar have actually worsened, particularly in the west where fighting between the Arakan Army and the Myanmar military has escalated since late 2018.

UN human rights monitors reported that between Mar. 23 and Apr. 17, military airstrikes and shelling in Rakhine and Chin states destroyed schools and homes and killed at least 32 civilians. The military and Arakan Army have both blamed each other for the increased violence, and media access to affected areas has been denied.

There is no fighting in KIO-controlled areas at present, but the fear of a resumption constantly looms. "As there is no ceasefire between the KIO and the Myanmar military, we have to be alert for war and also the virus," said Hing Wawm.

Gum Sha Awng, a spokesperson for the Joint Strategy Team, a group of ten NGOs supporting the COVID-19 response in the Kachin camps, said peace is critical: "With the pandemic, areas affected by ongoing conflict will be the most vulnerable. Now is the time to collaborate and coordinate. All parties, including the government, should not take any political advantage during this time."