Yangon puts 1.5m doses from Serum Institute to use as it awaits 300k from Beijing YANGON -- Myanmar began COVID-19 vaccinations on Wednesday, five days after receiving 1.5 million doses from India, whose commitment to the Southeast Asian nation overwhelms China's in terms of volume and timeliness.

At the Yangon General Hospital, vaccinations began for health care workers. Ma Khin Nyo Htway was one of the first to receive a shot. "I have been worried about the new virus," the hospital finance officer said, "but am now happy to have been vaccinated on the first day."

The 1.5 million AstraZeneca doses that arrived at Yangon International Airport on Friday were made by the Serum Institute of India, the world's largest vaccine producer. The Indian government also helped Myanmar to sign an agreement with the Serum Institute to buy an additional 30 million doses.

Myanmar has a population of about 54 million.

Myanmar received its first batch amid a push by New Delhi to provide vaccines to its neighbors. The country sits across the Bay of Bengal from India. 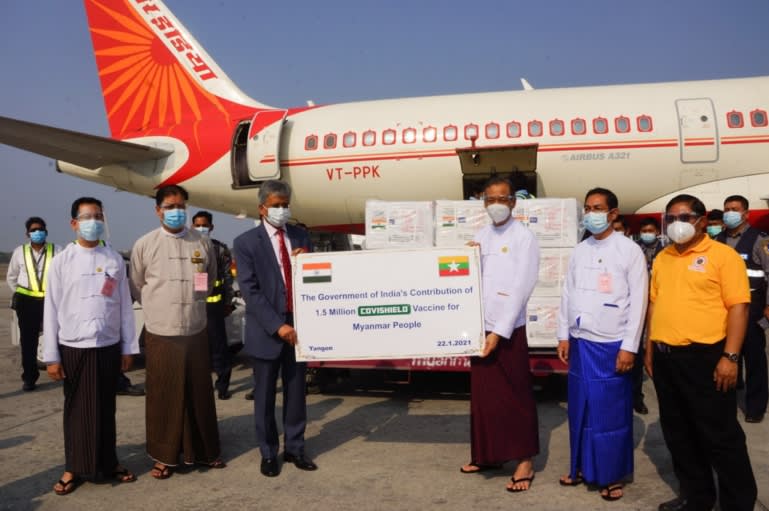 The first batch of vaccines from India arrived at Yangon International Airport on Jan. 22. (Photo courtesy of the Ministry of Information)

The Maldives, Bangladesh, Bhutan and Nepal all received vaccines from India a few days earlier than Myanmar. The Indian Ocean island nations of Seychelles and Mauritius received supplies the same day as Myanmar.

One day before the vaccine arrived, State Counselor Aung San Suu Kyi said in a televised speech that the government would prioritize "health personnel and people who are working on the front lines providing service" as well as government officials and parliamentarians.

The Ministry of Health and Sports plans to begin vaccinating the public at large on Feb. 5, according to an announcement made on Tuesday. It will prioritize those living in the "most affected areas," which likely means larger cities, as well as individuals who have preexisting health risks.

Meanwhile, Chinese Foreign Minister Wang Yi on Jan. 11 promised to provide 300,000 doses to Myanmar -- a commitment that lacks a concrete time frame. Wang was visiting Naypyidaw when he made the pledge.