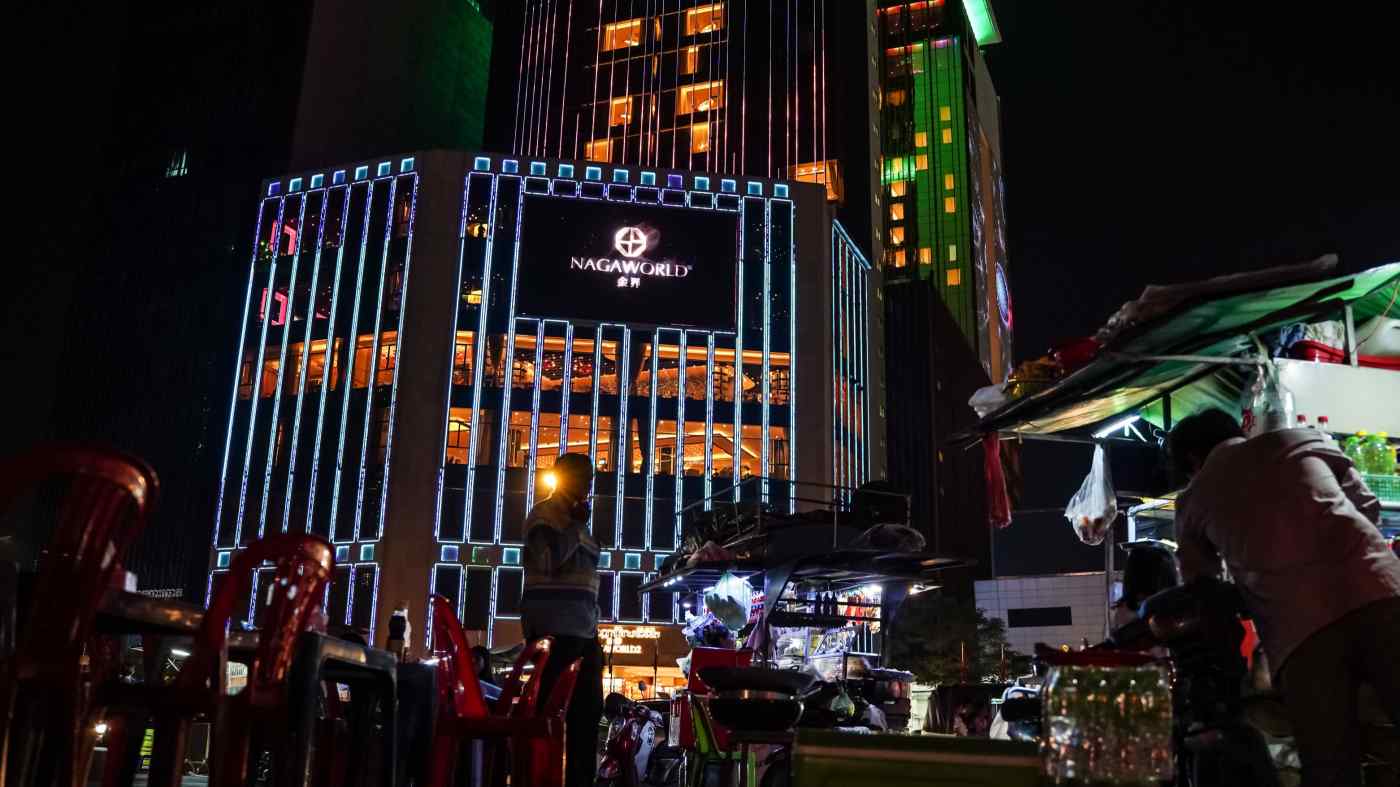 The closure comes as Cambodia is experiencing its worst coronavirus outbreak since the pandemic began, with thousands of residents in the capital Phnom Penh under a lockdown, but workers at the casino say action should have come sooner.

NagaCorp issued a notice to shareholders late on Monday announcing the closure, which it described as "swift," "responsible" and voluntary.

The union representing some 4,000 members of Naga's staff, however, says it raised concerns days earlier and that the company put workers' lives at risk by not acting sooner.

Union leader Chhim Sithar told Nikkei Asia that coronavirus concerns first emerged in the middle of last week after Ministry of Health officials visited Naga 2 on Feb. 24 to collect samples and test "a few hundred" workers. This was in relation to reports that a previous guest had been infected with the virus, she said.

Authorities arrived again late on Feb. 25, escorted seven guests out and locked down the premises for several hours. The venue was reopened about 4 a.m. on Feb. 26, according to the union.

"They told [workers] they got permission from the Ministry of Health to reopen and operate as normal," Sithar said.

Neither the Health Ministry nor NagaCorp responded to Nikkei's request for comment.

The union issued a statement on Feb. 26 demanding NagaCorp disinfect its properties and pay for all workers to be tested. Thousands of staff defied the management's order to return to work following the temporary closure and began boycotting shifts, Sithar said.

Naga 1 and the nearby Naga 2 complexes remained open until Monday evening, with the company announcing their closure just before 11 p.m.

In its letter to shareholders on Monday, the company said it had tested 3,000 staff "on or around" Feb. 27 and that 11 workers had returned positive tests. The statement made no mention of workers' boycotts or earlier tests by the Health Ministry.

"The Company intends to open for business after achieving some milestones of success in the fight and prevention for COVID-19 after consultation with the MOH," the letter said.

Overall, authorities in Cambodia have adopted a cautious approach toward businesses linked to suspected COVID-19 cases.

Since the announcement of the new outbreak on Feb. 20, the government has restricted access to dozens of locations around Phnom Penh, including multiple condominium high-rises, after they were linked to individuals who tested positive for the coronavirus.

Local media reported that some 10,000 residents were caught in lockdowns across the capital.

Cambodia, which has earned praise for its handling of COVID-19, is now battling its worst outbreak since the pandemic began.

The cluster, first detected on Feb. 20, has been tied to 340 infections -- a significant chunk of the country's 844 overall cases. The outbreak is reported to have originated from four Chinese nationals that bribed their way out of mandatory quarantine.

The government has ordered all schools and some types of businesses, including entertainment venues, to shut temporarily. Some casino and hotel properties in the coastal city of Sihanoukville have also closed their doors after being linked to the outbreak.

Majority-owned by Malaysian billionaire CEO Chen Lip Keong, who became a naturalized Cambodian citizen last year, NagaWorld is by far the country's largest casino and holds exclusive rights to operate in the capital.

It is currently undertaking a $3 billion expansion of its Phnom Penh complex and has also proposed building a non-gambling resort near Cambodia's famous Angkorian temples.

Sithar, the union leader, said it was disappointing that NagaWorld appeared more concerned about profits than staff safety.

"They said in their announcement that they are a responsible company, but they put the workers' lives at risk," she said.