A health worker labels a test-sample tube during the coronavirus outbreak in Hanoi, Vietnam. The country has found a new coronavirus variant that shares characteristics from the Indian and U.K strains.    © Reuters
TOMOYA ONISHI, Nikkei staff writerMay 30, 2021 11:25 JST | Vietnam
CopyCopied

HANOI -- Vietnam is bracing for disruptions its tech manufacturing sector, the country's economic engine and a vital cog in global supply chains, after authorities detected a new variant of COVID-19 with characteristics of both Indian and U.K. strains.

The government has called for nationwide efforts to protect factories as two northern provinces home to industrial parks struggle to control outbreaks.

"For the first time in Vietnam, a new coronavirus variant with characteristics from the existing Indian and U.K. variants has been detected," Minister of Health Nguyen Thanh Long said on Saturday.

"Bac Giang could not control COVID-19 in a short period of time as industrial parks there had high density of workers confined in factories, sharing toilets and canteens, traveling on the same coaches and usually renting houses in the same residential areas."

"We identified that the highest risks remain at industrial parks and once outbreaks occurred there, it will spread very fast and it will be very difficult to control," Long continued.

The Health Ministry said factories in the north will continue to detect new cases because of the confined spaces people work in.

In Bac Giang, four out of six industrial parks were forced to shut down on May 18 after more than 320 cases were found since April 27. Meanwhile, Bac Ninh province also locked down some locations and imposed social distancing measures. Workers at Samsung Electronics and Canon plants in the two provinces also tested positive.

Bac Giang is home to more than 240,000 factory workers and Bac Ninh about 330,000. Samsung Electronics' two plants in the northern region handle more than half the company's global smartphone output.

The four industrial parks in Bac Giang reopened on May 28, according to authorities. However, they are not in full operation. Meanwhile, on May 26 authorities said 13 of Samsung's local vendors based in Bac Giang were expected to resume operations on May 28. They were forced to shut down by authorities on May 18.

Southern provinces are tightening preventive measures at industrial parks in light of the situation in the north.

In provinces near Ho Chi Minh City -- Binh Duong, Long An and Dong Nai -- authorities have developed response scenarios to combat possible outbreaks while authorities of Bac Giang and Bac Ninh in the north told the online meeting they are developing response plans to deal with 5,000 and 3,000 cases, respectively.

The Health Ministry has asked industrial zone operators to carry out regular screening tests on at least 20% of workers or more. The responsibility of business owners and business management agencies must be strengthened, the ministry said.

On Saturday, Vietnam reported 277 new cases in the country with 158 in Bac Giang and Bac Ninh. 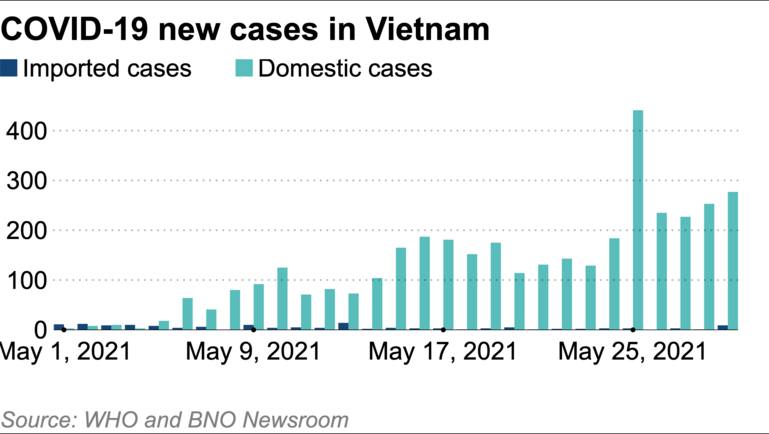 Officials at the meeting warned that densely populated urban areas such as the capital Hanoi, in the north, and Ho Chi Minh City may continue to record scattered outbreaks and clusters in the community.

Fears of a possible "superspreader" event were heightened in Ho Chi Minh City on Friday after three patients tested positive for COVID at Tan Phu District Hospital, forcing the facility to stop accepting new patients. The three had showed signs of fever, cough and fatigue and it was revealed that they were members of a local church. The three had taken part in church activities as recent as May 16.

Despite the lockdown of the hospital, Ho Chi Minh City recorded 100 cases between Thursday and Saturday, including 93 cases linked to the church.

That prompted Hanoi to ban religious gatherings from Saturday until further notice.

"In Ho Chi Minh City, the situation has become very serious after the general elections on May 23 and much more uncertain. The city is seeing more clusters every day," Ha Hoang Hop, visiting senior fellow with ISEAS-Yusof Ishak Institute, told Nikkei Asia.

The prolonged increase of new cases comes as the population remains largely unvaccinated. The share of people who received at least one dose of COVID-19 vaccine has just surpassed 1% in the country, according to the research publication Our World in Data.

"The goal is to create herd immunity in 2021, but the demand for vaccines in countries remains very large amid the global scarcity," Long, the health minister, said at Saturday's meeting.

While Hanoi has set up a vaccine fund to secure enough doses worth $1.1 billion, foreign businesses relying on Vietnam as the region's tech supply chain hub have urged the government to go further and faster.

"The government has been one of the world leaders in preventing the spread of COVID-19. The challenge now is to match that success with an ambitious and accelerated mass vaccination program," Alain Cany, chairman of the European Chamber of Commerce in Vietnam, told Nikkei Asia on Friday.

In Vietnam, in addition to promoting research and domestic production of vaccines, including one entering the third and final phase of testing, the Health Ministry is tapping available resources to acquire foreign-made COVID-19 vaccines.

So far, Vietnam has struck deals for more than 100 million doses of vaccine from peers including AstraZeneca and Russia's Sputnik V to inject 70% of the population aged 18 and over and is trying to buy 40 million more doses to achieve the target of herd immunity this year.

"In order to repel the pandemic and protect the big cities as well as industrial zones, the entire country needs to take more proactive, appropriate as well as effective solutions, with the spirit of fighting the pandemic like fighting the enemy," Prime Minister Chinh told the meeting.