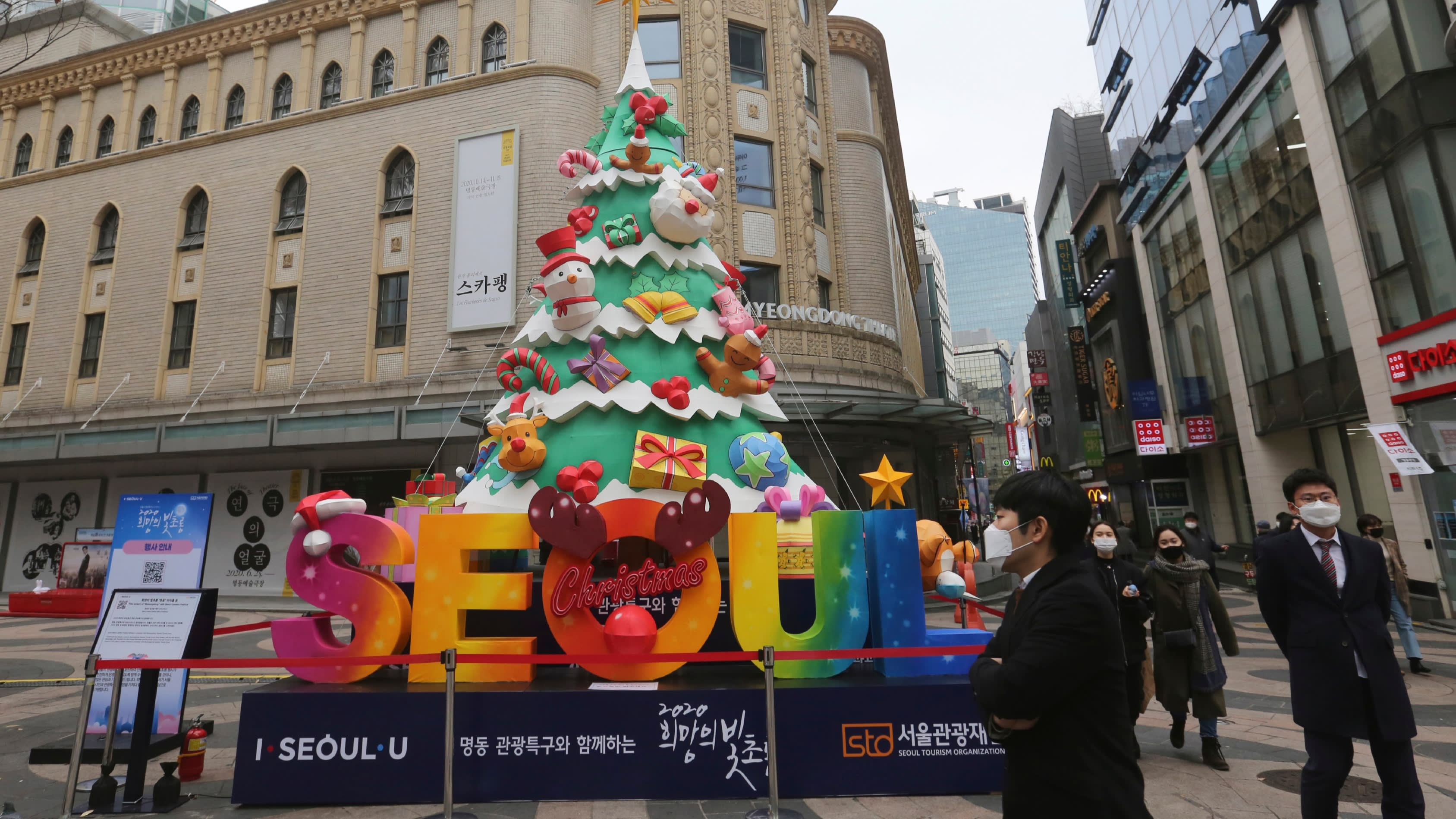 SEOUL -- Kim Soo-young was planning to spend Christmas Day hosting family at her home in southern Seoul, having invited her parents, as well as her younger brother and sister-in-law, to dinner at the apartment where she lives with her husband and 2-year-old daughter.

She knew that due to rising coronavirus cases, the family would not be able to get together at a restaurant, as private gatherings of more than four people are currently prohibited in the capital area, but she read in news reports that family gatherings at home were exempt from the restriction.

However, there are exceptions. The government announced that workplaces could exceed the limit, and that weddings could go ahead with a maximum of 50 participants, and funerals with 30 people. And four passengers may board the same taxi, meaning that with the driver, they would amount to a gathering of five in an enclosed space.

Having called off her family gathering, Kim, 35, struggled to get a handle on what is and is not allowed over the holiday period. "I understand that we need to change our habits because of the fast virus spread, I just don't understand why families can't gather but it's OK for people to go to their companies where there are dozens of people in one place," Kim said.

To address the confusion, the Seoul city government held briefings and distributed documents explaining the measures.

"Families or relatives who live in different residences can't meet in groups of more than four people. Like grandparents who live in Busan who visit Seoul to meet their grandchildren," a member of the city government's media relations team told Nikkei Asia in response to an email seeking clarification.

South Korea has for weeks been struggling to rein in the most dangerous phase of the coronavirus pandemic in the country, tallying around 1,000 new cases per day. On Monday the country reported a record-high 24 deaths of coronavirus patients. On Friday, it reported the highest number of new cases yet -- 1,241, up from 985 a day earlier.

The city said that the current rise in cases is especially challenging due to the lack of a discernible center, unlike the first and second waves of the pandemic in South Korea. "In February and August, the outbreaks were concentrated in particular clusters and measures like inspection, tracking, quarantine and treatment were effective," the city said in a release.

In those cases, outbreaks were tied to members of a church and participants in a political rally, respectively, which made it easier for authorities to track down people who could have been exposed. Around 70% of the current outbreak is concentrated in the densely populated capital area, putting officials on edge over the constant risk of community transmission.

This worrisome stretch is coinciding with the year-end period, when South Koreans customarily hold what they call "year-end parties," where friends, colleagues and alumni convene for meals and drinks. The city therefore argued that strict controls on gatherings were necessary.

Some commentators argued that instead of having city and provincial governments issue their own directives, the national government, led by President Moon Jae-in, should operate a control tower that would hand down measures that apply nationwide.

The right-leaning JoongAng Ilbo newspaper wrote in an editorial on Tuesday that the Moon administration has failed to display clear leadership from the top. "The people are going through a really tough time. President Moon should from now himself explain the situation directly to the people and ask for their understanding. Even if late, now is the time to be brave."

The results of a Realmeter poll released Thursday showed 59.1% of respondents saying that Moon is doing a poor job of running the country, up from 57.7% the previous week. The proportion who said Moon is performing well stood at 37.4%, a decline from 39.5%.

Adding to Moon's headaches has been controversy over the procurement of COVID-19 vaccines, as critics have accused his administration of failing to promptly secure vaccine doses for the South Korean public.

In a briefing on Tuesday, Moon's office called on critics to stop "politicizing" the vaccine efforts. The office said the administration has allocated 218.6 billion won ($198 million) for domestic vaccine development and secured 44 million vaccine doses from overseas.

Nevertheless, there remains a perception that the government is falling short in its management of South Korea's efforts to protect public health.

"The reality is that the successful virus response was achieved by health care workers and scientists and regular people who agreed to comply with quarantine measures. But the government tried to take credit for it," Alex Taek-gwang Lee, a professor at Kyung Hee University in Seoul, told Nikkei.

"When the virus situation was more stable, people held back from criticizing the government, but this current moment has revealed the government's flaws and people are angry," Lee said.