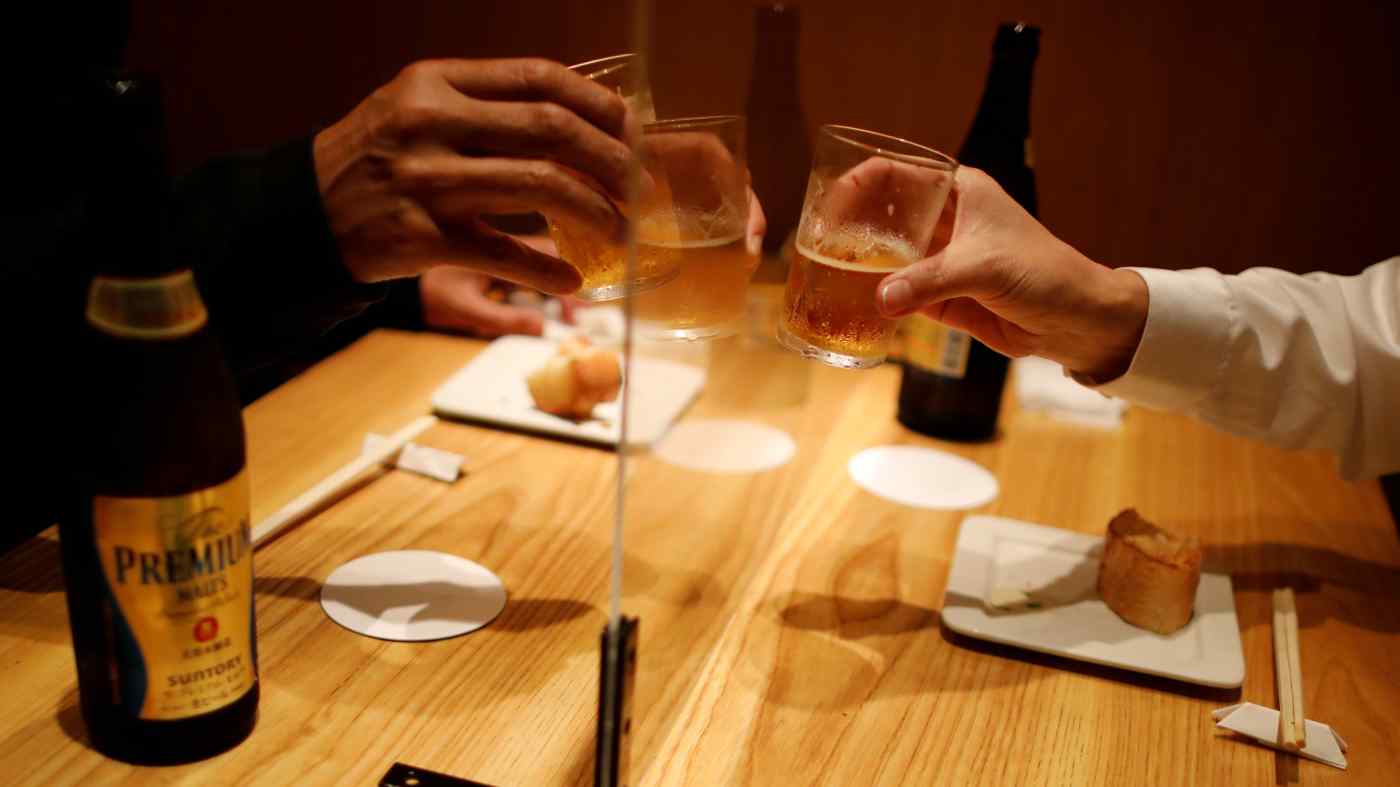 TOKYO -- Japan's tipplers will have to go straight home after a long day at the office as restaurant and bar chains shut down in response to a third coronavirus state of emergency that begins Sunday.

Prime Minister Yoshihide Suga on Friday declared a new state of emergency in Tokyo, Osaka, Kyoto and Hyogo prefectures, running to May 11, as COVID-19 cases rise in these areas.

But in contrast to previous states of emergency, when food and alcohol purveyors were urged to cut hours, affected areas are also urging businesses to stop serving alcoholic beverages or close altogether.

Restaurant operator Watami said Friday that it will close 78 directly run izakaya Japanese-style pubs across the four prefectures during the state of emergency. The alcohol restrictions would have made those locations unlikely to turn a profit, the company reasoned.

Whether franchise locations shut down will be left up to their individual owners.

Many eateries rely on alcohol for a significant chunk of their earnings. Izakaya in particular, which also serve small bites to eat, ring up roughly half their sales from alcohol. Many expect to take a hit whether they close or keep their doors open without serving the drinks.

Watami also operates conventional restaurants and Japanese-barbecue eateries. These will remain open but will shut their doors at 8 p.m. per government guidance and no longer serve alcoholic beverages. A sign for Torimero and Miraizaka, two izakaya chains operated by Watami. The company is shutting down 78 izakaya across the four prefectures entering a state of emergency on April 25.

Sanko Marketing Foods, which operates the Kinnokura chain, will temporarily close most of its izakaya in affected areas. But locations that tend to be popular around lunchtime will stay open with shorter hours and no alcohol, as will sushi and barbecue restaurants.

Torikizoku Holdings is holding off on a final decision until it receives a formal guidance from local authorities but plans to temporarily shut down 236 directly run locations across the four prefectures.

Meanwhile, Colowide will close its izakaya locations as a general rule, while looking to continue operating certain outlets under reduced hours.

Some businesses are pushing back against the requests, which are currently voluntary. Global Dining, which operates Italian-restaurant chain Cafe La Boheme, said it would not stop serving alcohol or cut hours unless ordered to. It expresses wariness of moves that target the food industry and force the company to suffer financially.

There is also concern that residents of the four prefectures could seek alcohol-serving establishments in neighboring areas. Saitama, Chiba and Kanagawa prefectures, which share a border with Tokyo Prefecture, will urge businesses in areas now facing elevated coronavirus restrictions to stop offering alcoholic beverages.