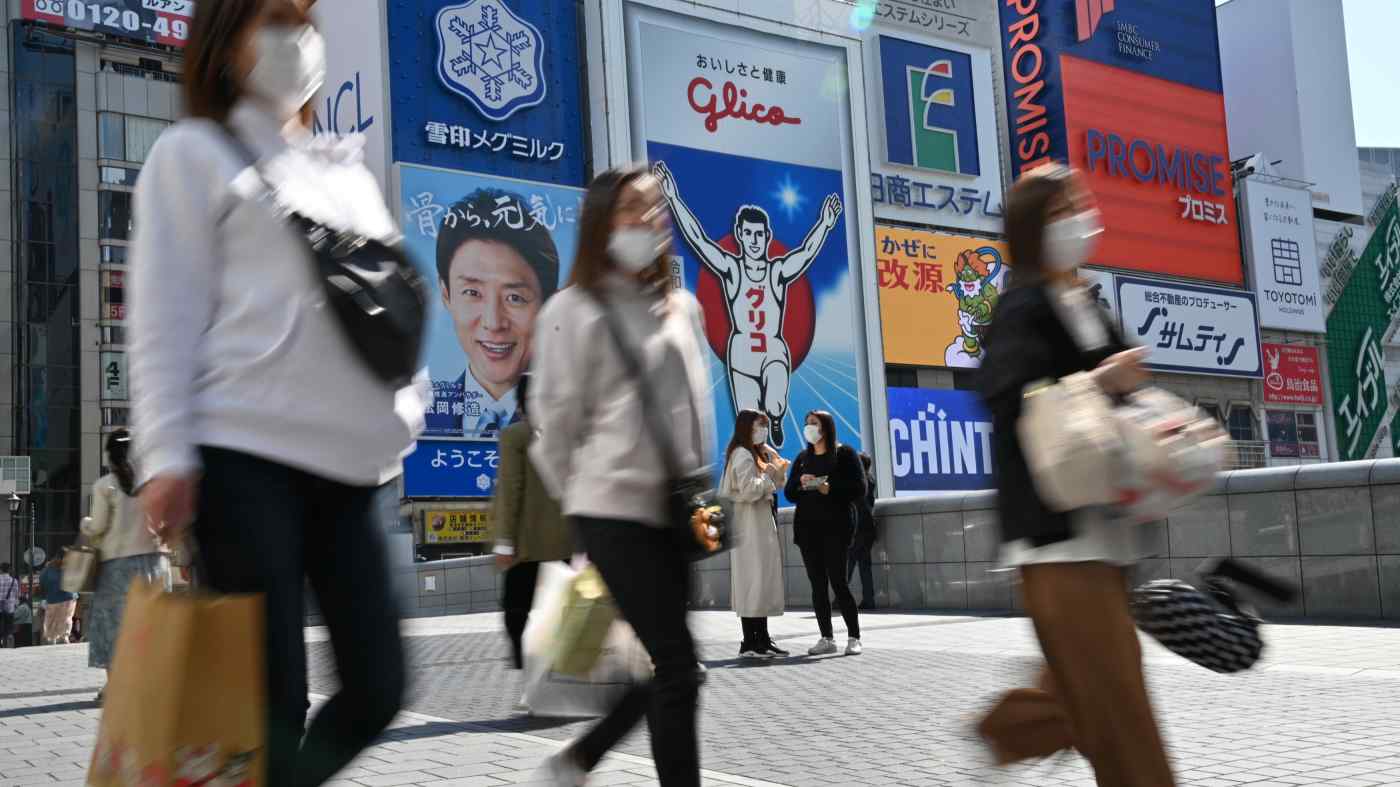 People walk in central Osaka on April 19: The prefecture will ask the central government to declare a state of emergency in hopes of slowing a rise in COVID-19 cases. (Photo by Takaki Kashiwabara)
Nikkei staff writersApril 20, 2021 20:38 JST | Japan
CopyCopied

TOKYO -- Osaka's prefectural government on Tuesday officially asked the central government to impose a COVID-19 state of emergency for the third time in roughly a year, as the western metropolis battles a surge in infections that is straining its health system.

The measures, for the first time, could include asking some entertainment and commercial facilities to close altogether. This may involve restaurants and bars, department stores, theme parks, shopping malls and underground arcades, though the final decision on what should shut down would be made with the central government.

Osaka Gov. Hirofumi Yoshimura told reporters that he has already conveyed this policy to the government. At a COVID-19 countermeasures meeting in Osaka on Tuesday, Yoshimura suggested that three weeks to a month would be an appropriate time frame for the emergency.

Prime Minister Yoshihide Suga is weighing the request but stopped short of making a decision on Tuesday evening. The Tokyo Metropolitan Government is also considering asking the central government to declare a new state of emergency in the capital.

But the quasi-states of emergency are set to become full states of emergency as the earlier restrictions have failed to slow the spread of COVID-19 and it becomes increasingly difficult to secure hospital beds. States of emergency will also enable prefectures to request or order businesses to close or to shorten their business hours. Fines for failure to comply rise as high as 300,000 yen under a full emergency declaration.

A state of emergency could also broaden operating restrictions beyond restaurants and bars. "We have been asking the public for many things, such as avoiding going out as much as possible ... but that has not been enough," Yoshimura told reporters on Tuesday before making the official request to the central government. Yoshimura said he is considering ordering the closure of shopping malls in the hope that "there would be less movement of people, if there was no reason to go out to the city center."

The government and municipalities will determine which sectors should be subject to closure requests. Supporting measures will also be considered, including financial compensation for businesses that comply with closure requests.

Osaka residents will also be asked to avoid unnecessary outings. The prefectural government will ask companies to slash the number of commuters by encouraging working from home.

Osaka Prefecture has asked restaurants and bars to close by 8 p.m., citing high infection risks. But COVID-19 cases have continued to rise since the quasi-state of emergency was declared on April 5. The number of new cases has exceeded 1,000 for six straight days since April 13, hitting a record 1,220 on Sunday. The prefecture's hospital beds for COVID-19 patients with severe symptoms are more than 90% full, raising doubts over whether those who require medical treatment will be able to get it.

Hyogo Gov. Toshizo Ido is also considering asking the government to declare a state of emergency in the western Japanese prefecture, saying it would follow the lead of neighboring Osaka. Tokyo Gov. Yuriko Koike is preparing to do the same later this week. More prefectures could follow suit.

COVID-19 cases have continued to rise in Tokyo as well. And with many people expected to return home or travel during the Golden Week holidays starting next week, experts say the government should take more stringent measures, including asking more businesses to close.

Investors in Tokyo reacted negatively to reports of stricter COVID-19 containment measures on Tuesday, with the benchmark Nikkei Stock Average diving more than 600 points, or 2.2%, at one point, over fears of another wave of infections and the economic damage of additional emergency declarations. The index closed down 1.9%, with more than 90% of the 225 issues comprising the index ending the session lower. Losers included retailers such as department store operator Isetan Mitsukoshi Holdings and Uniqlo owner Fast Retailing. Transportation stocks, as well as restaurants and real estate companies, were also hit hard.

Junichi Makino, chief economist at SMBC Nikko Securities in Tokyo, pointed out that Japan's COVID-19 emergency, including quasi-states of emergency, "could continue to be extended unless the infections are contained, and that will cause the economy to shrink."