Over 60% of Asia still closed to tourists, versus 17% of Europe SINGAPORE -- Asian countries were some of the most aggressive in closing their borders to fight COVID-19 and are among the slowest to reopen to tourists, recently compiled data shows, underscoring the prolonged pressure on economies that rely heavily on international visitors.

As of Sept. 1, 28 countries or territories in the Asia-Pacific region -- 61% -- remained completely closed to foreign tourists according to the World Tourism Organization, a United Nations agency. This was far ahead of the 17% of European destinations that were still off-limits, and exceeded the 41% for the Americas and 51% for Africa as well.

Globally, 43% of 215 surveyed destinations were keeping their borders closed to tourists.

Of 27 destinations that have completely closed for over 30 weeks, 19 are in the Asia-Pacific region, it noted. 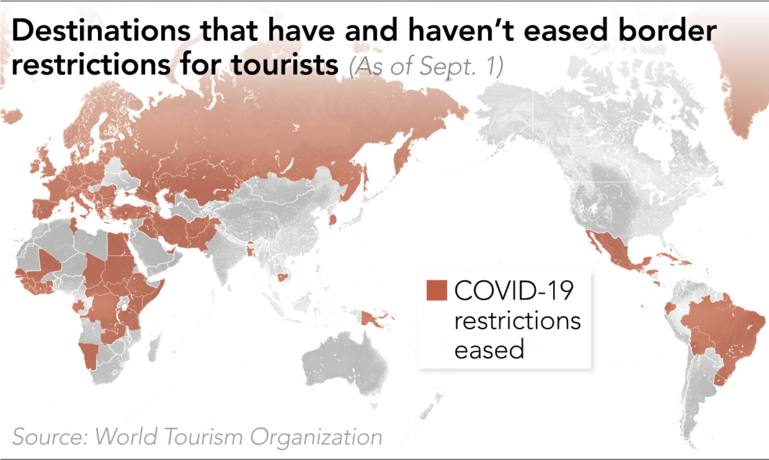 Thailand, which attracted nearly 40 million visitors last year and where tourism contributes around 10% of gross domestic product, is looking to reopen the popular resort island of Phuket to a limited number of holidaymakers as early as next month. But after the country broke a 100-day streak with no local COVID-19 transmissions, the reopening remains uncertain.

Vietnam last week began restoring limited international flight connections in Asia -- starting with Japan, South Korea, Taiwan and China -- but only for Vietnamese nationals, diplomats, businesspeople, students and other selected passengers. Local travel agents said tourists are unlikely to be allowed until December, while analysts said Hanoi will be very careful about reopening after the outbreak that hit Danang in July.

Malaysia, one of the first countries to shut its borders, may keep them closed to international tourists until the second quarter of next year, Tourism Minister Nancy Shukri told the Nikkei Asian Review last month.

In some cases, governments may be counting on domestic travelers to pick up the slack, reducing the urgency to reopen. Several countries "prefer for now to focus on domestic tourism and domestic air travel, which has recovered quite nicely," said Brendan Sobie, an independent aviation analyst. Tourists wear face masks as they pass the Rialto Bridge on a water taxi in Venice. Although Italy and other European countries were hit hard by COVID-19, many have reopened for leisure travel.   © Reuters

Sobie also suggested that new COVID-19 clusters or second waves in some countries might make them think twice about exposing their populations to tourist traffic.

Countries with higher infection rates -- such as India, Indonesia and the Philippines -- face higher hurdles to reopening.

Indonesia, which continues to report more than 3,000 cases a day, shelved plans to welcome international tourists back to Bali on Sept. 11.

At least one Asia-Pacific country that braved a reopening -- the Maldives -- has been forced to tighten its rules. The Indian Ocean archipelago nation allowed international tourists in on July 15. This month, after a spike in cases, it issued a directive that all inbound travelers must show documents confirming they have had a negative PCR test.

In any case, only about 5,200 visitors have entered the Maldives since mid-July, according to local reports -- a tiny fraction of the roughly 1.5 million annual arrivals seen in recent years. One of the biggest concerns is that even where infection rates are low, tourism could lead to a coronavirus resurgence that would overwhelm weaker health systems. In its report, the U.N. agency stressed "the importance of health and hygiene infrastructure for the easing of travel restrictions," noting that most destinations that had already relaxed their rules had high health standards.

Governments will continue to face a dilemma between economic needs and safety concerns for the foreseeable future. And open borders are not a cure-all for the industry.

South Korea never imposed an outright ban on tourists, opting in April to simply insist that visitors stay in quarantine for two weeks. But the number of arrivals was still down by 95.8% on the year in July, according to the Korea Tourism Organization. 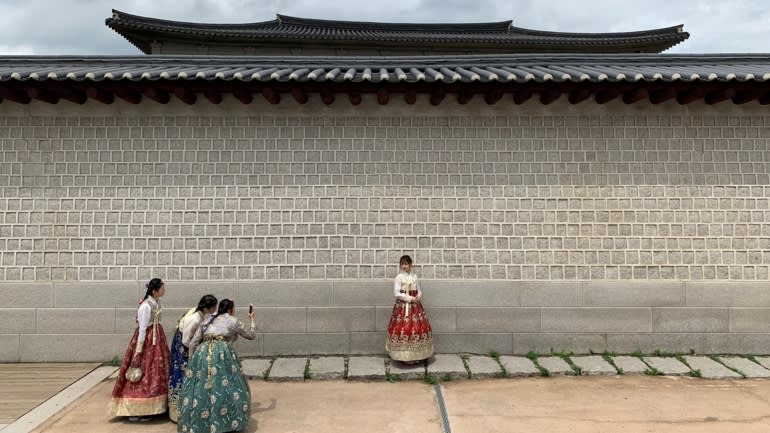 Although South Korea was technically open, the number of arrivals was still down by over 95% in July.   © Reuters

Travelers' own concerns about the virus, restrictions in departure countries, uncertainty over varying rules and the burden of quarantine time are all barriers. Nevertheless, the World Tourism Organization said it is possible to restart leisure travel, urging governments to establish the necessary safeguards to reopen their borders. Testing at airports and tracing apps for travelers are among its recommendations.

"But it's a very slow process. I think one country has to take the lead," he said, adding that Singapore could be the trailblazer as it does not have much of a domestic travel market to fall back on. "If the model is proven to be successful, other countries will also start looking at it."

Additional reporting by Kim Jaewon in Seoul and Masayuki Yuda in Bangkok.