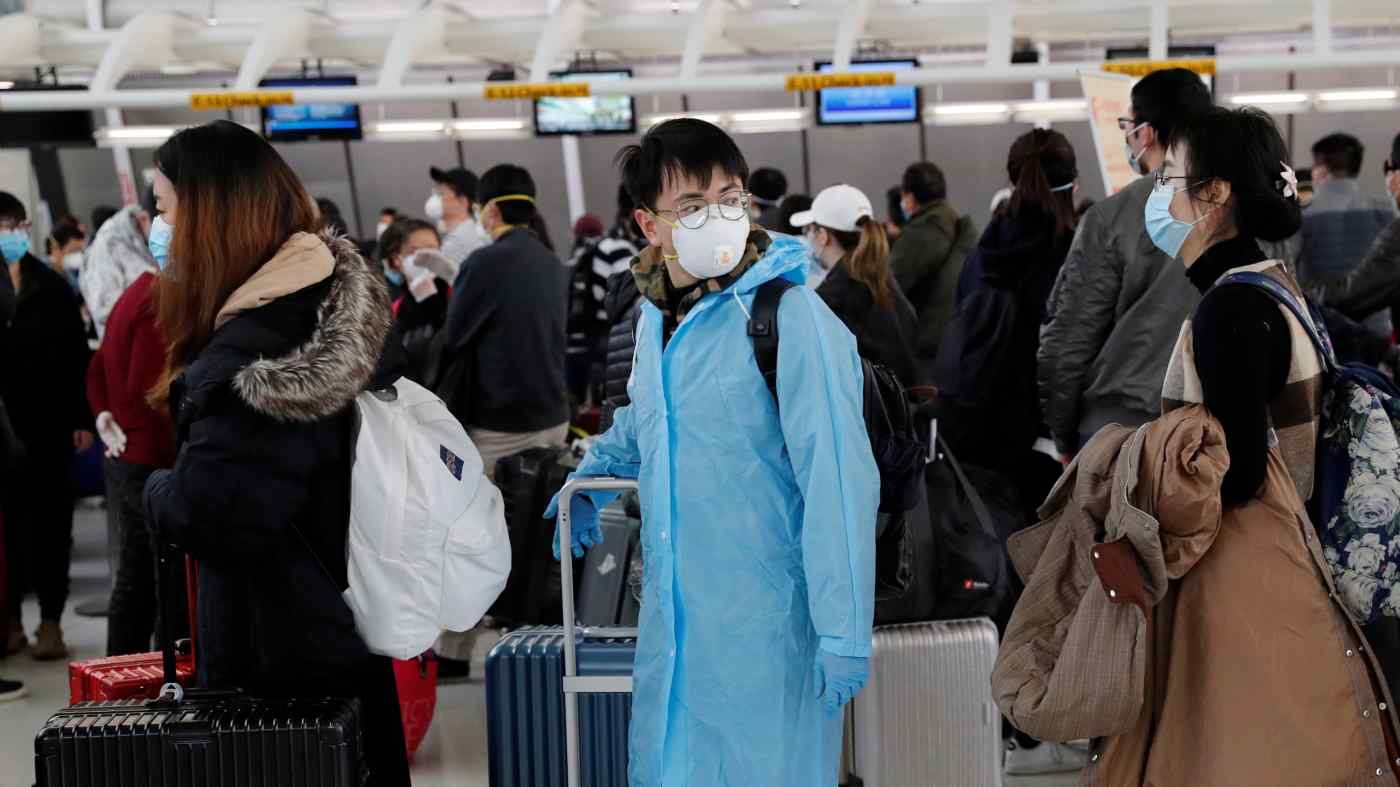 Passengers wait to check in for an Air China flight from New York, where coronavirus cases have been rising, on March 13.   © Reuters
YIFAN YU, Nikkei staff writerMarch 18, 2020 19:07 JST | China
CopyCopied

PALO ALTO, U.S. -- Elena, a Chinese graduate student in Italy, was headed home. But after two sleepless nights, she landed about 8,000 km away from Beijing on Monday -- in Ethiopia.

The 25-year-old, who asked to be identified only by her English name, had intended to fly from Rome to Beijing via Moscow on Friday. But when she showed up at the airport, she was told by the carrier, Aeroflot, that only Russian citizens were allowed to board due to fears of the new coronavirus.

Elena and 50 other Chinese passengers scrambled to find another way home. After a 24-hour wait in Rome, she ended up on a plane to Addis Ababa.

The flow of Chinese travelers returning home signaled how much the outbreak has changed in the past couple of weeks. While China appears to have made progress in curbing the epidemic, other countries have been slammed by surging case numbers. No other nation has been hit as hard as Italy, where the death toll has soared past 2,000, with roughly 25,000 infections.

Suddenly, going home has become a more attractive prospect for many overseas Chinese, despite expensive and hard-to-buy tickets, grueling flights and strict quarantine requirements on arrival. For China's authorities, meanwhile, imported infections are a new concern -- so much so that they are urging students to stay away and are aggressively tracking travelers with big data.

"Unless necessary, overseas Chinese students should suspend trips home or going to other areas with high infection rates, to reduce the risk of being infected during long flights," Pang Xinghuo, deputy director of the Beijing Center for Disease Control and Prevention, said at a news conference on Wednesday.

China's National Immigration Administration on Monday had announced that since the World Health Organization declared a global pandemic on March 11, Geneva time, over 62,700 passengers had entered the country from "high risk" locations such as Italy, South Korea and Iran. Ninety percent of them were Chinese nationals.

Elena told the Nikkei Asian Review that she did not like her chances if she had stayed in Italy, where authorities have scurried to enforce sweeping lockdowns amid reports of nearly overwhelmed hospitals.

"Even Italians are not getting proper treatment," Elena said. "As a foreign student, if I were infected, I don't think I will get the treatment I need." Coronavirus patients sit inside a hospital in Brescia, Italy -- one of the hardest-hit countries.   © Reuters

She was scheduled to land at Beijing Capital International Airport on Tuesday, but her trip home would not end there. She was facing two weeks in isolation at a government-designated location.

Beijing announced the quarantine policy last week. Other cities in China with major international airports have introduced similar restrictions. And on Monday, the National Health Commission held a special meeting to discuss ways to prevent an influx of infections from abroad.

"China has many nationals living overseas including students studying abroad, and many of them want to come home, which brings new challenges for our work in containing the outbreak," the Health Commission said in a news release about the meeting.

Chen, a 24-year-old student at UCLA in California who asked to be identified only by her last name, said two weeks in quarantine was a price she was willing to pay.

"It's a difficult decision to make, but I've decided I'd rather risk getting the virus during the intercontinental flight and quarantine in China, than staying here waiting for things to worse," Chen told the Nikkei Asian Review.

"I don't think the American government is taking COVID-19 seriously enough and fear the situation might get out of hand very soon. It seems like the Chinese government is better equipped to deal with the virus and they have done a pretty good job in the past month."

Wary of expensive U.S. medical bills, Chen opted to spend nearly $2,000 on a one-way ticket to Beijing with two layovers. She is currently in isolation at a hotel there.

But quarantining travelers is only part of Beijing's defense strategy. China is using high-tech methods as well, drawing on big data gathered through years of extensive surveillance of its citizens. That data is being combed with artificial intelligence to identify individuals at higher risk of infection. China's authorities say about 62,700 travelers entered the country from places with high infection rates in the days after the WHO announced a pandemic -- the vast majority of whom were Chinese nationals.   © Reuters

On Sunday, Zhang Huanhuan woke up to a surprising message from her father.

He had received a call from a community civil servant acting as a liaison with the local government, "asking if I plan to return home anytime soon," Zhang told Nikkei. "If so, my parents need to inform them immediately with my flight number and arrival time."

The 25-year-old works as a travel agent in Osaka, Japan. Her parents live in Nanjing. Though she had not been back to China in almost a year, the liaison knew she was in Japan and checked up on her intentions.

Zhang is not the only one who has been flagged.

More than 1 million entries of Chinese travel data have been shared with related government agencies across the country by the National Immigration Administration, according to a news conference held by the State Council on Monday. Returning nationals are also being asked to voluntarily register their flight numbers and health status with local governments and the immigration agency before boarding their planes, so the authorities can be ready to test them and arrange quarantines.

"Sharing related personal information is for better prevention and containing the virus," Liu Haitao, minister of border inspection at the Immigration Administration, told reporters. "We will make sure the data is secured and personal privacy will be respected during the information-sharing process."

Not everyone will be comfortable with their travel history being passed beyond immigration and border control. Zhang, though, was not bothered.

"It is just a necessary step to take for the country to avoid another outbreak and I understand why the government has to do it," she said. "I don't feel like this breached my privacy, or [that I'm] being spied on by the country. I've done nothing wrong and have nothing to hide."