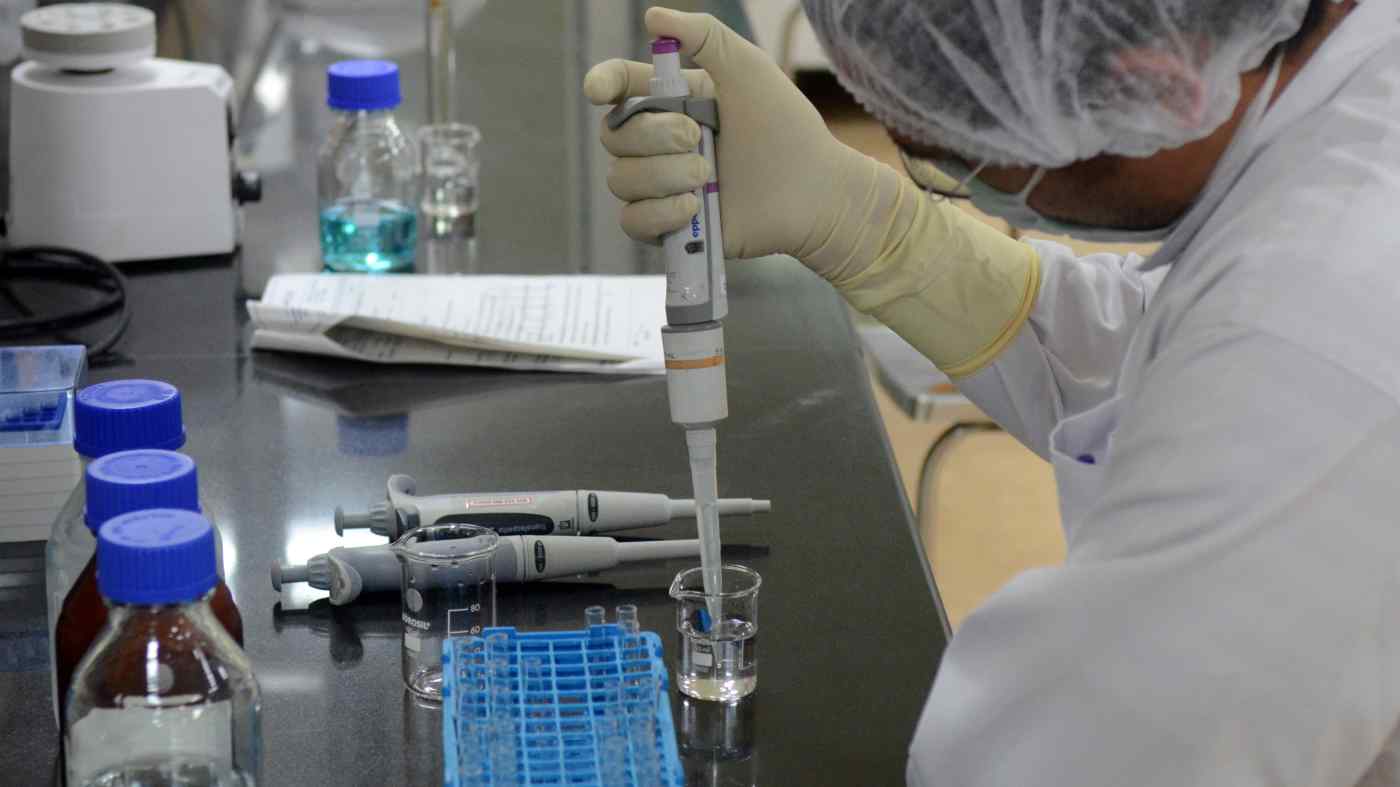 A research scientist works inside a laboratory at Serum Institute of India, the world's largest maker of vaccines, in the city of Pune on May 18.   © Reuters
KIRAN SHARMA, Nikkei staff writerJuly 21, 2020 22:36 JST | India
CopyCopied

NEW DELHI -- India, which has reported over a million cases of the novel coronavirus, is expected to soon be part of human trials for an Oxford University vaccine which has shown encouraging results in early stages of clinical testing.

Serum Institute of India, the world's largest vaccine-maker based in the western Indian city of Pune, has a production agreement with British pharmaceutical company AstraZeneca -- which has partnered with Oxford in the COVID-19 vaccine development -- to manufacture their product in India once a successful candidate emerges.

The Indian institute is expected to manufacture up to a billion doses of such a COVID-19 vaccine annually for India and other low-income countries.

The Oxford-AstraZeneca vaccine showed a robust immune response in the early phases of its trial during which it was tested on 1,077 participants between the ages of 18 and 55, according to findings published Monday in The Lancet medical journal.

"The trials have shown promising results and we are extremely happy about it," Adar Poonawalla, the CEO of Serum Institute of India, said in a statement.

"We will be applying for the licensure trials to the Indian regulator in a week's time," Poonawalla said. "As soon as they grant us permission, we will begin with the trials for the vaccine in India. In addition, we will soon start manufacturing the vaccine in large volumes."

The vaccine's late-stage Phase 2 and Phase 3 trials, currently underway in the U.K., Brazil and South Africa, are also due to start in the U.S.

India, the world's third worst-hit country by the pandemic after the U.S. and Brazil, has so far confirmed over 1.15 million COVID-19 infections and more than 28,000 deaths.

Meanwhile, the country has also started human trials of its first Indigenous vaccine candidate called Covaxin and that is being developed by pharmaceutical company Bharat Biotech in collaboration with the Indian Council of Medical Research, or ICMR. Zydus Cadila is another Indian company which has received regulatory approval to conduct human trials.

The New Delhi-based All India Institute of Medical Sciences, or AIIMS, which is among 12 sites chosen to conduct Phase 1 and Phase 2 of human trials for Covaxin, announced on Monday that it had kick-started the process.

AIIMS Director Randeep Guleria said the vaccine would be tried on a total of 375 volunteers in Phase 1, and 100 of those participants would be recruited by his institute. If found safe in Phase 1, it would then be tested on 750 people in total while Phase 3 would involve a larger population to test the vaccine's efficacy, he added.

The ICMR's July 2 letter to trial sites, which said the target date for launching the vaccine for public use is envisaged as being no later than Aug. 15 "after completion of all clinical trials," had caused controversy.

Health experts called the deadline "unrealistic" and critics of Prime Minister Narendra Modi viewed it as a move to help him score political points on the occasion of the country's Independence Day, which falls on Aug. 15. The ICMR later clarified its position, saying the letter was meant only to cut unnecessary red tape and not bypass any necessary processes.