KARACHI -- Pakistan's fragile health care system has increased fears about the spread of the new coronavirus, which was recently labeled a pandemic by the World Health Organization.

As of Thursday, 21 coronavirus cases have been confirmed in the country. All the patients had recently traveled abroad, with the majority having visited Iran on a pilgrimage, according to the Pakistan government.

Fear of the coronavirus in the country has prompted the government to seal the border with Afghanistan. Schools have been closed in Balochistan and Sindh provinces. Li Bijain, Chinese Consul General in Karachi overseeing his country's presence in the provinces, has urged the local government of Sindh to keep the schools closed.

Sindh has 15 confirmed cases of the coronavirus. Barrister Murtaza Wahab, the spokesperson for the province, told media that there is a lack of coordination between federal and provincial governments. Moreover, Syed Murad Ali Shah, chief minister of Sindh, claims that screenings at the Taftan border and Jinnah International Airport -- Pakistan's largest airport -- is weak.

More than 3,500 Shiite pilgrims who returned from Iran are being quarantined in Taftan, a small southwestern town in the Chagai district bordering Iran. But the regional government of Balochistan does not have the required facilities to effectively quarantine people suspected of being infected. Last week, citizens in Taftan protested against allowing pilgrims -- who were supposed to be quarantined -- to mix with the general population.

An official at the provincial health department, who requested to remain anonymous, told the Nikkei Asian Review the government is not capable of effectively quarantining people in Taftan. "The government has sent a coronavirus testing van to Taftan but it's not operational because of the lack of a [stable] power supply," the official said.

Residents in Chagai told Nikkei that the town could not accommodate more people coming from Iran. The government is now shifting the flow of people to Quetta, the capital of Balochistan Province, said the residents.

On Wednesday, members of civil society in Quetta protested against setting up insecure quarantine centers. 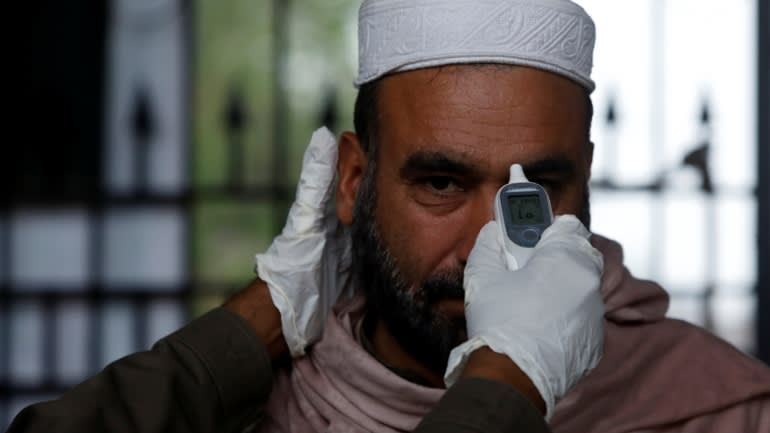 A health worker checks a man's temperature amid coronavirus fears at the entrance to a government building in Peshawar, Pakistan on March 12.   © Reuters

Pakistan ranks 105 out of 195 countries in the well-respected Global Health Security Index 2019, leading experts to question Pakistan's ability to deal with the virus.

Dibyesh Anand, head of the School of Social Sciences at the University of Westminster London, believes that Pakistan's health care system is not only patchy, but ridden with inequities and inefficiencies. "[Pakistan] will struggle badly to cope with a crisis of this scale," he told Nikkei.

The professor also questioned the low number of confirmed cases in Pakistan. "South Asian states are not known for their transparency, and this is why the low figures from Pakistan or India should not reassure us about them being immune from an epidemic," he said.

While Pakistan's health care system is struggling to cope up with the outbreak, its economy is also taking a hit. According to the Asian Development Bank, Pakistan's economy may lose 1.67% of its gross domestic product. The Pakistan Stock Exchange's KSE-100 Index plummeted 4.53% on Thursday due to the crisis.

James M. Dorsey, senior fellow at the Rajaratnam School of International Studies in Singapore, believes it is only a matter of time before Pakistan's economy really feels the fallout of the outbreak. "If Pakistan can control the spread of the coronavirus then it has to bear economic costs due to controlling the mobility of people," he told Nikkei. "If the virus spreads then economic costs will be borne by the already fragile health care system."

Despite the crisis, Pakistan has not suspended flights to China. The government has also chosen not to evacuate students stranded in Wuhan, epicenter of the outbreak, despite protests by the students and their families.

Westminster's Anand said the government's excuse for not evacuating the students -- namely, that it wants to reduce the virus' spread -- is disingenuous at best because the virus has already spread and there was always the option of quarantining the students.

Dorsey believes the government's decision not to evacuate the students should be viewed against the backdrop of an obviously weak health care system. "If the government has not suspended flights with China but still not evacuated the students, then it's pure opportunism," he claimed.