Russia pulls ahead of China in Central Asia vaccine diplomacy ALMATY, Kazakhstan -- As Kazakhstan kicks off its coronavirus inoculation program with Russia's Sputnik V shot and Turkmenistan prepares to start a similar campaign, Russia is pulling ahead of China in the battle to win Central Asian hearts and minds through vaccine diplomacy.

Sputnik V, which was hailed as "safe and effective" by The Lancet medical journal on Tuesday, has had the biggest uptake across the region, with deliveries already made to Kazakhstan and Turkmenistan. Uzbekistan, which is running trials on a Chinese option, is the only country in this neighborhood engaging in large-scale vaccine cooperation with Beijing.

During the pandemic, Beijing has utilized its soft power by delivering much-needed medical supplies and other assistance to the countries of Central Asia, where it is a growing influence as an investor and trading partner. However, Russia traditionally regards the region as its own backyard and is reasserting its presence on the vaccination front.

Kazakhstan became the first Central Asian country to start a mass vaccination drive this past Monday using Sputnik V supplies imported from Russia. Kazakhstan will also be producing the vaccine at a pharmaceutical plant in the city of Karaganda.

Ben Godwin, head of analysis at PRISM Political Risk Management, is not surprised that Kazakhstan has opted for Russian injections.

"In terms of Kazakhstan, Russia remains its main political ally and probably felt an obligation to accept the Sputnik vaccine early on," he told Nikkei Asia.

Another factor favoring Russia's vaccine is the distrust of China felt by the public in Kazakhstan. In recent years there have been protests against perceived Chinese expansionism and Beijing's growing influence in the country. So the use of a Chinese-produced vaccine would likely be met with hostility.

Kazakhstan, which has recorded around 250,000 COVID-19 cases and more than 3,000 deaths, plans to vaccinate around 6 million people -- out of a total population of 19 million -- by the end of 2021. The voluntary program is initially targeting health care workers, teachers, students, law enforcement officers and high-risk groups.

The locally manufactured variant of Sputnik V is due to come into use from the middle of this month. The vaccination program should be ramped up in April when Kazakhstan's home-produced vaccine, QazCovid-In, is expected to be rolled out.

Uzbekistan put in an order for more than 35 million doses for Sputnik V last September, although it has not received any significant quantities yet. Unlike its neighbors, the country is hedging its bets by conducting trials with a vaccine developed by China's Anhui Zhifei Longcom Biopharmaceutical. Uzbekistan recently increased the number of participants in the Phase 3 clinical trials from 5,000 to 9,000.

"Uzbekistan has been the most open to Chinese 'COVID diplomacy' of the Central Asian states," Godwin told Nikkei Asia.

Uzbekistan, which views China as a key partner, has drawn closer to Beijing during the pandemic. "Economic engagement with China is a critical element of President [Shavkat] Mirziyoyev's ambitious plans to grow the Uzbek economy," he added.

Alongside this engagement in the economic sphere, China has offered assistance in the medical field. "We have seen Chinese experts visit Uzbekistan, aid from China and online training and exchanges with Chinese and Uzbek medical personnel on treatment of COVID-19," Godwin said.

However, among the general public in Uzbekistan, Russia is still seen as the partner best placed to help the country handle the COVID-19 crisis. Nearly 60% of respondents viewed Russia favorably in a survey conducted by the Central Asian Barometer research agency.

Just over half of the respondents in Kazakhstan opted for Russia, while in Kyrgyzstan 75% of respondents did the same.

To kick-start its mass vaccination drive, Uzbekistan, which has recorded nearly 80,000 cases and more than 600 deaths, is also looking to the World Health Organization's COVAX initiative. The program is working to ensure access to vaccines in lower-income countries. Uzbekistan is awaiting the delivery of 100,000 doses of the Pfizer-BioNTech COVID-19 vaccine later this month. 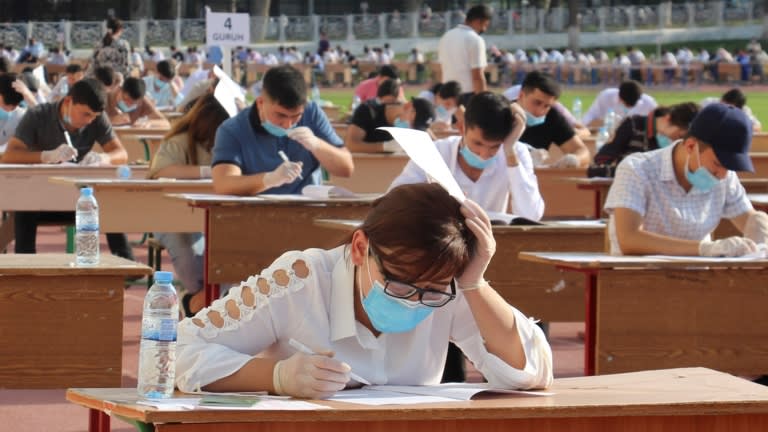 Kyrgyzstan, which has recorded around 85,000 cases and more than 1,400 fatalities, announced plans on Wednesday to start a comprehensive, three-stage vaccination program when doses are available. It is hoping to use supplies of the Oxford-AstraZeneca vaccine sourced via COVAX and will start with the most at-risk groups and front-line workers. Russia's Sputnik V is awaiting approval in Kyrgyzstan.

As in Kazakhstan, opting for Chinese vaccines would be a political hot potato in Kyrgyzstan, under the new government of President Sadyr Japarov. Relations between the two countries remain uneasy in the aftermath of an uprising in the country last October, which saw the previous president forced out of office and the collapse of the government. In the turmoil, Chinese-run mines and an oil refinery were targeted in shakedowns by mobs, using threats of violence to extort money.

In Tajikistan the need for mass vaccination may not be so pressing after President Emomali Rahmon proclaimed victory over the virus in his New Year's address. Despite this apparent success, the country has signed up for 1.8 million doses through the COVAX initiative and is currently assessing Sputnik V. Tajikistan has recorded more than 13,000 infections and 90 deaths, although there have been just three new cases reported since the start of the year.

Turkmenistan, for its part, is pressing ahead with plans to vaccinate key workers despite its official line that there have been no COVID-19 cases detected within its borders. On Jan. 18 it became the first country in Central Asia to approve Sputnik V and a large consignment of the vaccine was delivered last Saturday, with more expected later this month ahead of the vaccination program's anticipated start date of Feb. 15.

Previously, Turkmen President Gurbanguly Berdymukhamedov -- a former dentist who prides himself on his medical knowledge -- suggested that burning harmala, a medicinal herb, would be enough to stop the spread of the coronavirus.

In December he extolled the virtues of licorice root in the fight against the virus. But with Turkmenistan set to host a global sporting event, the Track Cycling World Championships, in October, it seems the government is looking for some additional help in warding off COVID-19.