HO CHI MINH CITY -- Vietnamese factories serving Samsung and a major Nike and Adidas supplier have suspended operations after detecting cases of coronavirus at their facilities, the country's health ministry said on Wednesday.

Samsung Electronics has halted work at three plants in Ho Chi Minh City out of 16 total and temporarily cut its workforce to 3,000 from 7,000, according to a post on the ministry website. It said the South Korean company, which makes roughly half its smartphones in Vietnam, found 46 infections and will introduce a plan for workers to stay at the factories.

The ministry's announcement follows similar COVID-related disruptions that hit Apple and Samsung vendors in northern Vietnam in May and comes as the country battles its worst-yet outbreak of the disease.

Nikkei Asia contacted Samsung Vietnam but the company was not able to immediately provide a comment for this story.

The news comes on the eve of a Ho Chi Minh City directive that manufacturers must shut unless their employees are allowed to sleep on-site or are shuttled directly to work, starting Thursday.

Many companies including Coca-Cola already set up tents for staff in hopes of keeping operations running, but not every company feels able to do so.

Pou Chen, a major footwear supplier, is putting its operations on a 10-day hiatus starting on Wednesday in a move that will affect 56,000 workers "because it is not possible to arrange accommodation for all workers at the factory," according to the health ministry.

Pou Chen did not immediately respond to a request for comment.

Luong was speaking at a webinar hosted by the American Chamber of Commerce in Vietnam on Tuesday, when he described how the company was working with vendors on best pandemic practices, including "how to ensure timely and good communication to our workers so that we can relieve stress and uncertainty." 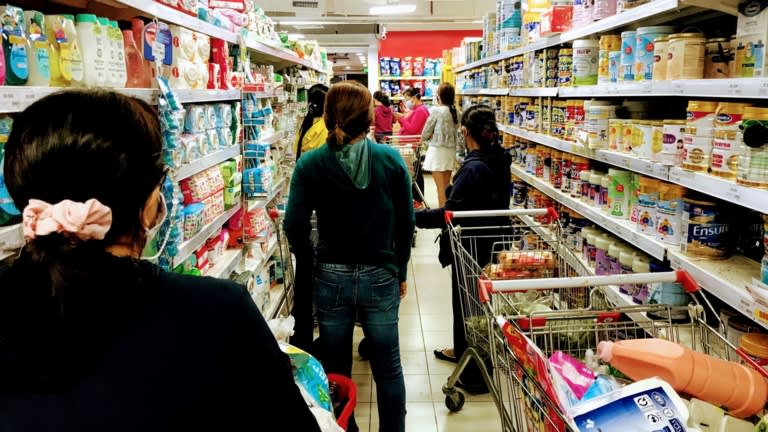 Grocery stores were crowded with shoppers stocking up on essentials amid expectations of tighter coronavirus restrictions in Ho Chi Minh City. (Photo by Lien Hoang)

While the health ministry website mentioned only Samsung and Pou Chen, local media are reporting that dozens of factories have been shuttered in Ho Chi Minh City, including in the Saigon Hi-Tech Park. The zone accounts for 30% of the city's exports, according to its Business Association Chair Uyen Ho who is also director of public affairs for Intel Vietnam and Malaysia.

Vietnam is one of the world's biggest exporters of electronics, footwear, clothes and bags.

Industrial suspensions are expected to spread as companies rush to comply with the new Ho Chi Minh City directive regarding staff living arrangements. Stores in the business hub began rationing eggs and noodles as residents stocked up on groceries out of concern the directive would widen to more restrictions. The city already tightened its lockdown last Friday, banning food deliveries and fining people who went out without an approved purpose.

After the latest outbreak began on April 27 and forced industrial parks to close in northern Vietnam, the government added factory workers to its vaccine priority list, dispensing jabs at companies from Intel to Sabeco brewery. The Southeast Asian country has inoculated about 4% of its 100 million people.