Tokyoites cope by working less, leaning on grandparents and exercising together 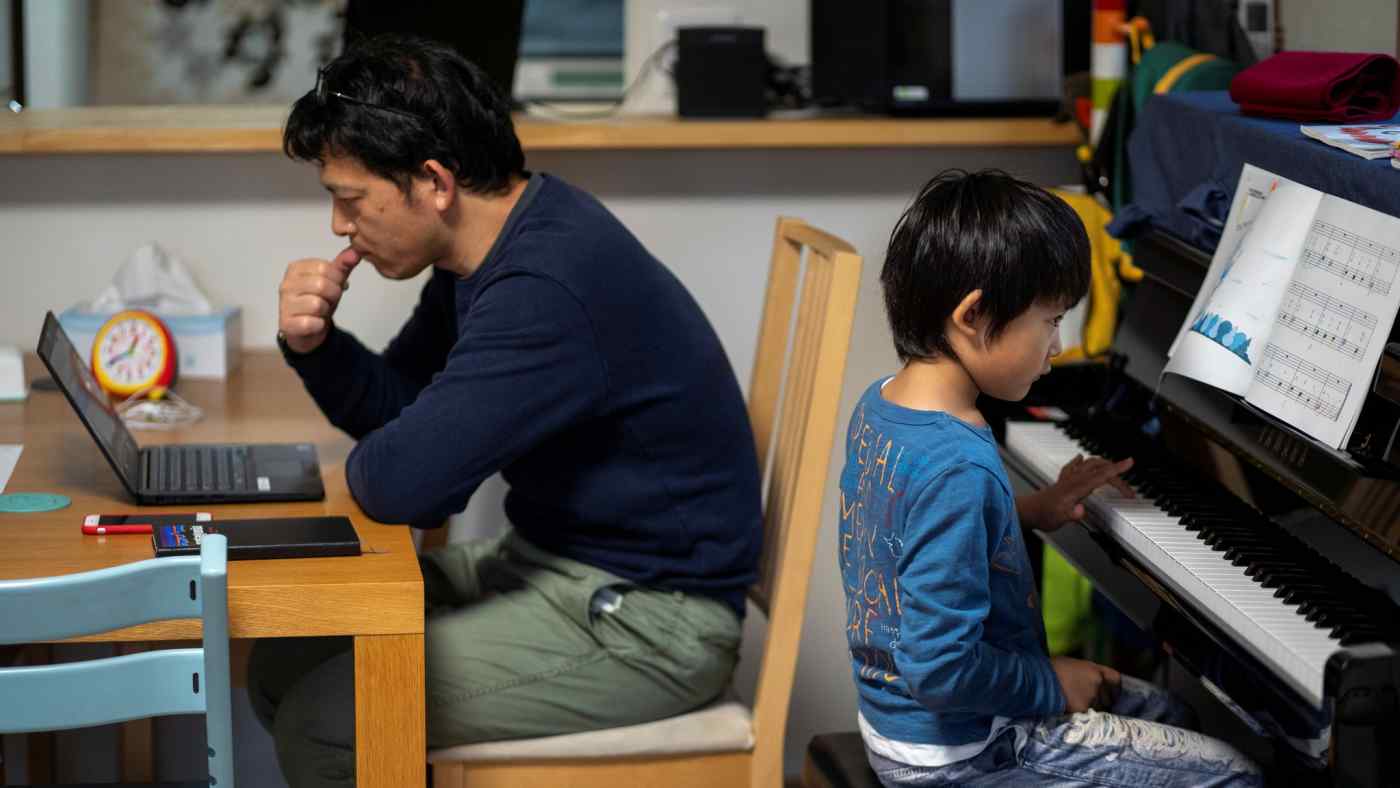 Japan's school closures and work-at-home edicts are creating some uncomfortable moments but are also giving parents an opportunity to show their kids what they do at the office.   © Reuters
Nikkei staff writersApril 4, 2020 14:02 JST | Japan
CopyCopied

TOKYO -- Double-income families raising children in Tokyo are under growing pressure to cope now that Japan's school closure request is expected to be extended due to the worsening coronavirus outbreak.

The possibility is growing that many Tokyo elementary and junior high schools will remain shut until after the "Golden Week" holiday period at the beginning of May as Japan attempts to slow the virus's spread.

Some parents are reducing their work hours or sending their children to stay with grandparents for more than two months.

Other parents, along with their children, are thinking about how to best use their time at home to make up for the halt in formal studies and the limited opportunities to go outside and play.

A 37-year-old male company employee living in Tokyo's Chuo Ward heaved a sigh of resignation. "Thinking about how to reduce the burden on my children is my top priority," he said, referring to his 9-year-old daughter and 5-year-old son.

In late March, his 45-year-old pharmacist wife asked to work only half days beginning this month, anticipating that schools would remain closed. Her status has been downgraded from quasi-company employee to part-timer. Her earnings will also take a hit.

The couple have made desperate efforts to care for their children since the beginning of March, when Japan closed its schools en masse; dad began working from home and mom took a leave of absence. Kids in Tokyo who have been barred from school work on crossword puzzles and popular "Unko drills." (Photo by Seitaro Sato)

Given the risk of infection and the long train rides that would be involved, the couple does not want to ask their parents for help watching the kids. They also gave up on hiring a babysitter due to the expense.

After seeing the daughter's emotions fall prey to pent-up stress, the wife decided to reduce her hours at work to "face up to" her daughter as well as her son. "It's unavoidable," the husband said, "although we will not be in good shape financially."

A 39-year-old female company employee also living in Chuo Ward began to have her 10-year-old daughter stay at the house of her husband's parents in nearby Saitama Prefecture soon after schools were closed at the beginning of March.

Now, she said, "I might not be able to see my daughter for another month." Neither she nor her husband can take leaves from their jobs. They also cannot leave their daughter home alone in the big city.

They had initially intended to pick up their daughter before the beginning of the new school year next week, but there is now a possibility that they will have to let her stay in Saitama until Golden Week.

"I never thought that I would not be able to see her for such a long period of time," the wife said.

By contrast, a 41-year-old company employee in Tokyo's Nerima Ward sees the extended closure of schools in a positive light. He said his second son, 10, has borrowed a novel from the library. The book is part of a series, and the boy is determined to complete the series while he is off from school. The man's third son, 8, says he wants to "master" computer programming and has found some free-of-charge study materials to help him do just that.

The father has been working from home. Who can hold his plank longer? Oto-san or the kodomo?

"I had had mixed feelings about my sons coming to me and begging me to play with them, because it also forced me to cut my work hours," the man said.

When he learned of the news that the school closure would likely be extended, he decided to create an environment at home that allows him to concentrate on work by giving his sons their own work. For this, he bought the popular, humorously designed "Unko Doriru" (Poop Workbook) series on school subjects and crossword puzzles.

"It will be great if we can turn the extended school closure period into a meaningful time," the father said.

A 37-year-old woman in Tokyo's Toshima Ward said she, her husband and their eldest son started to work out together after the 10-year-old said he was gaining weight due to a lack of exercise. The boy had often complained of being bored, immersing himself in a portable game console day and night since schools closed down.

The three also started watching TV news together, which inspired mom to explore ways to stimulate the son's interest in society. She began teaching him all of Japan's prefectural capitals, using a map she made herself.

"I want to give my son something that can stimulate his passion for learning and carry him through the extended period without school," she said.

Kazunori Kakei, a clinical psychologist who has worked as a school counselor, warns that prolonged periods of staying home can frustrate both parents and children, and cause them anxiety.

"You should try to be relaxed, have humor and enjoy life," Kakei said.

Usually, parents slip back and forth between home and business modes, helped by the different environments of each place and the distance that separates them. But always staying home with kids makes mode switching a difficult journey, Kakei said.

But the hurdles are illusory. "Many kids can understand if you tell them the hours you need to concentrate on work," he said. "And I want people to be aware that they now have a chance to allow their kids to see their parents at work."