Discrimination against people from province leads to job losses and evictions

HONG KONG -- When Zhang Yu'e walked into a luxury fashion store in the city of Chongqing in southwestern China last month, she was greeted by a cluster of friendly sales people. But as soon as Zhang filled out her membership card, the smiles faded and the staff stepped back.

"No one at the store wanted to go near me," recalled Zhang, whose name includes a character representing the traditional name of Hubei Province, where her father is from. But in a country where more than 2,000 people have died from the coronavirus that has its origins in Hubei, the mere mention of the province is increasingly becoming a stigma.

It took a while until the store's manager finally walked toward Zhang, asking from a safe distance: "Have you been back to your hometown lately?" the manager asked her. "I found it ridiculous," said Zhang, who was born in Chongqing. Although her local Chongqing dialect revealed Zhang's true identity, "they were still scared."

Zhang's experience reflects an uncomfortable challenge facing Hubei and its roughly 59 million citizens: People from the virus-hit province -- and those with even the remotest of connections -- stand a high chance of discrimination in their own country, with some factories going so far as turning away all Hubei workers regardless of their health condition.

It is hard to know exactly how many people from Hubei have suffered such treatment because of their birthplace or some other connection to the province, but the situation has become serious enough to draw the attention of state-run media. 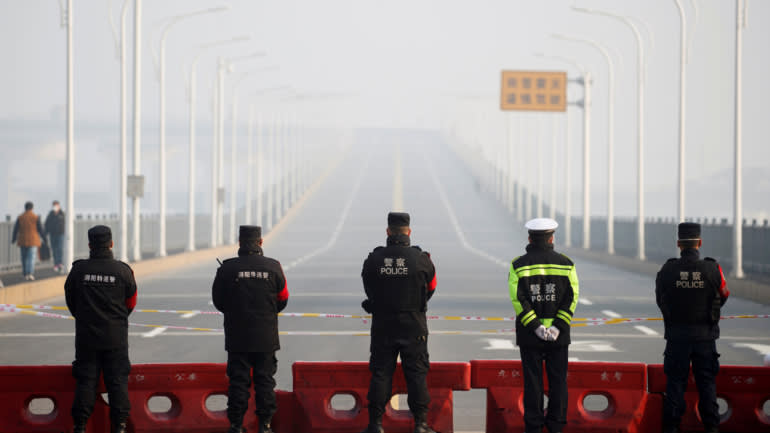 Police stand guard at a checkpoint at the Jiujiang Yangtze River Bridge that crosses from Hubei Province to the city of Jiujiang in Jiangxi Province. Many cities in China have shut their doors to travelers from Hubei.   © Reuters

"The growing fear [of the outbreak] has turned anti-virus into anti-Hubeiness," Guangming Daily said in a commentary published on Jan. 29. "Such behavior has gone far beyond the boundary of medical quarantine and will likely violate the rights of innocent people."

People's Daily, another government-backed newspaper, also urged citizens in the country to "stay away from the coronavirus, but not stay away from people of Hubei."

Although outbound transportation from Hubei has been all but suspended since late January, the free flow of travelers before the lockdown has sparked concerns about the spreading of the virus.

In Wuhan alone, roughly five million people left the city before the lockdown in January. In light of possible transmission of the virus, many cities in China have shut their doors to travelers from Hubei.

Families were turned away at hotels, and truck drivers were stuck on roads for days because highway-exit guards would not allow them to pass through. Even those who left their hometown months or years earlier to start a new life elsewhere have increasingly fallen victim to anti-Hubei sentiment.

Take, for example, Li Yuansheng, a 26-year-old factory worker in Shenzhen. The native of Hubei told the Nikkei Asian Review that he has not visited his hometown for the past year, but he was fired shortly after the coronavirus outbreak.

"[The factory] said they were afraid that I might have been in contact with people from Hubei," Li said.

Wang Qiang, 23, another migrant worker from Hubei, had similar struggles. He tried but failed to land a job in Shenzhen, despite an exhausting three-week search. "All the factories I have contacted told me that they don't take workers from Hubei," he said. 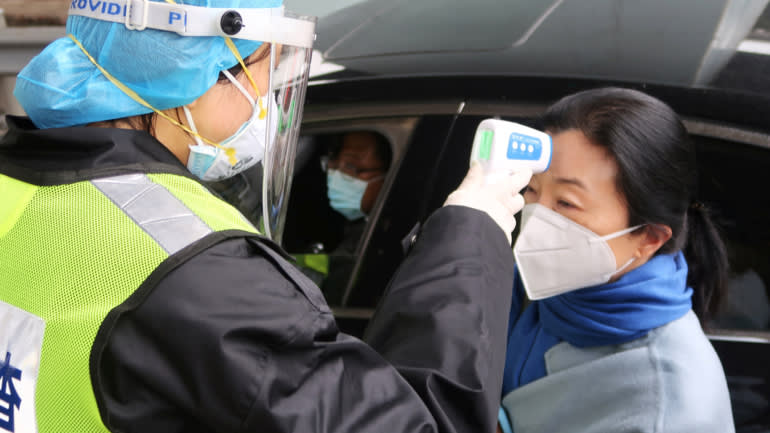 An officer checks the temperature of a passenger at a highway toll station in Hubei. The province delivered more than five million blue-collar workers to other regions in China last year.   © Reuters

Lu Peiyi, a recruiter at a Dongguan-based labor dispatch agency told Nikkei that factories she represents are not taking people from Hubei for the time being -- even if the applicants can prove that they had not been in Hubei since long before the outbreak.

"It would be very troublesome for the employer to have workers from Hubei," Lu said. She said factories worry that the existence of such workers would attract unwanted attention from local officials, and other workers under the same roof could also be subject to additional quarantine and screening measures.

To avoid the spread of the coronavirus, many cities have adopted a policy that requires factories to close operations if even one person tests positive for the disease in their plants.

Such precautions, however, have resulted in a tougher job market for Hubei workers, said Li Qiang, the executive director of New York-based China Labor Watch, a nongovernmental organization.

"Discrimination against Hubei workers can be found everywhere and they aren't able to find work," Li said. "Those who are already employed by factories and who tried to go back to work have been told to go home and take unpaid leave."

Li said the absence of Hubei workers in factories will add to the labor shortage facing Chinese manufacturers. Additionally, "this would definitely create hostility between Hubei workers and others," he said.

Hubei delivered more than five million blue-collar workers to other regions in China last year, according to the state-run Xinhua News Agency.

Observers worry that the stress will extend beyond personal struggles to public health risks. Driven by the fear of anti-Hubei sentiment, "people from Wuhan and Hubei, as well as those who recently visited the region, will likely hide their identity [and travel history] in order to avoid discrimination," said Chen Youhua, a sociologist of Nanjing University, in an opinion piece published this month.

"That would further worsen the spread of the coronavirus epidemic," Chen warned.

Social stability, a top priority in Beijing, is also at stake. "Discrimination against people from Wuhan or Hubei is very likely to stir up tensions," Chen wrote. "The violation of human rights may lead to resistance from people of Wuhan and Hubei and trigger civil conflicts. ... It could cause wider-scale social crises."

Tensions are already building up on Chinese social media. Last week, when Hubei-born actress Song Yi was asked by authorities in Shanghai to stay indoors for another two weeks following her 23-day self-quarantine, it sparked a public outcry on Weibo, with many people from Hubei flocking to the microblogging site to vent their own frustration.

"I have deeply felt discrimination and hostility against Hubei-born Chinese," one Weibo user wrote.

"If Song as a celebrity received such treatment, can you imagine what ordinary people from Hebei would be facing?" another user wrote.

Wang, the migrant worker in Shenzhen, said he had suffered "unprecedented" discrimination over the past few weeks. "Many people on the internet would call us batman," he said, a reference to speculation among some scientists that bats were the source of the coronavirus.

Wang was kicked out by his landlord even though he explained to people that he did not return to Hubei for the Lunar New Year.

"They all knew [that I did not go back to Hubei]. They are just scared," Wang said. He tried a few hotels at first but was turned away after they learned where he was from. Now Wang has to sleep on the floor in a rundown building, along with two other people from Hubei.

Similarly, the housing estate that Li, the factory worker, used to stay at in Shenzhen has barred him, and he has no choice but to sleep on the street. When Li decided to try his luck in Zhuhai, a city bordering Macao, he discovered that he could not even buy a bus ticket due to his Hubei connection.

"They told me that they will have to put the driver in quarantine if they let me on board," Li said. "I only want to make some money and find a girlfriend. Why is it so difficult?" This week, Li found a job as a construction worker for a temporary hospital for quarantined coronavirus patients in Shenzhen.

To be sure, not everyone in China has shunned people from Hubei.

Vincent Chen, a Beijing-based public-relations specialist from the city of Xiangyang in Hubei, said that his friends and colleagues have become even more friendly toward him in recent weeks.

"Some sent me homemade pickles and local delicacies after they learned I could not go back home for the Chinese New Year," he said. While Chen has not experienced discrimination, he believes "discrimination does exist."

"Since we have not found a cure for the disease yet, some might think the safest way to avoid catching the coronavirus is to stay away from Hubei people," he said.