As governments and Big Tech look beyond COVID, some fear 'mission creep' SINGAPORE -- The coronavirus pandemic has brought countries and technology giants together to protect populations from the deadly virus. Now Apple and Singapore are showing how this nexus of government and Big Tech could expand in the post-pandemic world -- promoting health and convenience but also fueling debate over privacy.

Come late October, Apple Watch wearers in Singapore will be eligible for up to 380 Singapore dollars ($270) in rewards over two years for pursuing a healthy lifestyle. The program centers on an app called LumiHealth, created through a partnership between Apple and the government. Users will be encouraged to complete fitness challenges by, say, walking, jogging, swimming or attending yoga class.

Though some may be reluctant to share information, residents who spoke with Nikkei Asia sounded positive.

"I think the government needs statistics," said a 43-year-old Chinese man living in the city-state. "They don't publish my data."

A 70-year-old Singaporean man with high blood pressure, who just recently bought an Apple Watch to monitor his health, expressed similar sentiments. "Unless you are a politician or a very rich man, it shouldn't be a problem for normal people."

Indeed, Apple and Singapore have stressed their commitment to privacy and promised that users can always opt out of sharing. "Data will be stored in a highly secure system that is fully compliant with Singapore's data privacy and security laws," they said when they announced the initiative. 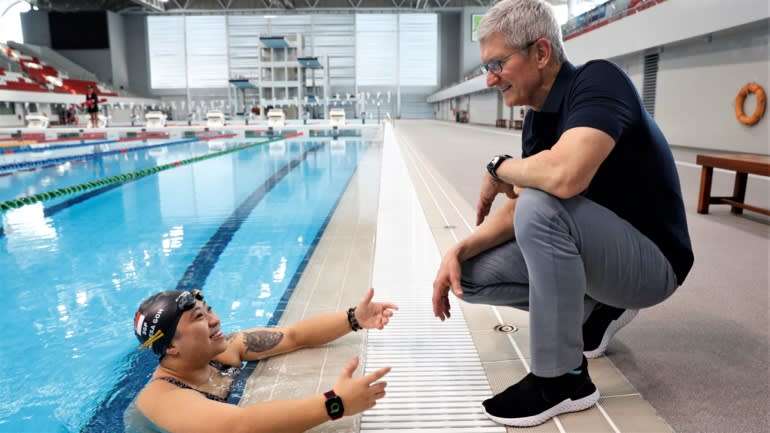 Nevertheless, LumiHealth comes as governments across Asia increasingly turn to the world's biggest tech companies to tackle health issues. The economy-crippling coronavirus has only accelerated this trend, worrying some experts.

"The challenges we face demand an unprecedented alliance between business and government," Microsoft CEO Satya Nadella wrote in an Op-Ed published by the Financial Times in April.

Microsoft is "working at every level of government to help standardize data, provide it for health care workers and to support scientific efforts to discover treatments and vaccines," he wrote.

In China, the authorities use COVID tracing apps that were developed by big tech companies including Alibaba Group Holding and Tencent Holdings.

Like LumiHealth, all these projects involve personal health data. They also meet a pressing need. But some privacy advocates warn that the COVID-19 era is widening the view of "Big Brother," especially in Asia.

A report released on Wednesday by U.K.-based consultancy Verisk Maplecroft said the region is becoming the world's "surveillance hot spot" under the "pretext" of public health.

"A danger is emerging that some states are unlikely to relinquish new-found powers and tools of mass surveillance once the health crisis recedes," wrote human rights analyst Sofia Nazalya, stressing the "risk is most pronounced in Asia."

The report raises red flags over a host of Asian countries -- from China to Thailand, Cambodia and Myanmar. It notes that India is the only democracy that sought to make downloading a COVID tracking app mandatory for all workers, though the central government later softened its stance.

"As surveillance measures are extended, particularly as part of 'smart city' plans that have bloomed across Asia, tech companies would do well to be aware of if or how their involvement in building this new digital infrastructure facilitates rights abuses," Nazalya wrote.

She is not the first to sound the alarm. An open letter signed by hundreds of scientists earlier this year expressed concern "that some 'solutions' to the [coronavirus] crisis may, via mission creep, result in systems which would allow unprecedented surveillance of society at large."

Nicole Stephensen, a privacy expert and principal of Australia's Ground Up Consulting, explained there is a risk of mission creep or "function creep" whenever technology involving personal information is "leveraged for the benefit of the community."

She told Nikkei that a classic example would be the use of security cameras, initially intended to deter crime, to track and monitor the health of individuals by applying facial recognition and temperature measuring technologies to the feeds. "The stark reality of function creep when it comes to surveillance technologies of any kind -- even the ones that are ostensibly in the public interest -- is erosion of privacy rights."

Yet technology offers obvious benefits, too, from helping to contain COVID-19 to limiting medical costs in aging Asian societies like Singapore. And as the pandemic drags on and governments juggle the challenges of fighting the virus and reviving their economies, more opportunities are there for the taking.

"Governments will be anxious to work with those innovators in order to bring solutions to the community in a timely manner," Stephensen said. "I don't think the tech giants are the only ones in the race, though. Any provider with a product that is fit for purpose and which could be deployed at scale would have an opportunity here; particularly if the public health need extends beyond contact tracing."

When it comes to LumiHealth, Stephensen called it a "great modern example of a public-private partnership" that promises community benefits. But she also said she is "relieved" Singapore has a proactive personal data protection regime and data protection watchdog.

Leong Thin Yin, a professor at the Singapore University of Social Sciences, predicted the Apple program "will showcase how Big Tech and government collaboration can work to improve the health of citizens."

He noted that states need extensive data and machine learning technology to pinpoint the causes of lifestyle diseases, and the best therapies. "I can see why it is important that the Singapore government has access to data that could support future policymaking, as health care in the future would be more than acute medical or rehabilitative community medicine," he said. "Prevention is always better than a cure."

Even critics of spreading surveillance acknowledge the potential value of Big Tech-government ties.

Nazalya, reached by Nikkei, agreed that such partnerships "can be useful" -- so long as "they abide by clear and rigorous rules on transparency and adequately assess the human rights impacts that may arise out of such projects."