Workers who crossed into Singapore from Malaysia on Aug. 17 board a bus prepared by their employer to take them to quarantine locations. (Photo by Kentaro Iwamoto)
P PREM KUMAR and KENTARO IWAMOTO, Nikkei staff writersAugust 17, 2020 14:01 JSTUpdated on August 17, 2020 15:44 JST | Singapore
CopyCopied

JOHOR BARU, Malaysia/SINGAPORE -- Malaysia and Singapore on Monday opened their border for the first time in five months, in a vital step toward nursing both coronavirus-hit economies back to health.

Limited crossings are now possible via the two land gateways connecting the neighbors -- a bridge and a causeway -- as well as by air. A checkpoint on Singapore's side of the land border was busy on Monday morning, with workers arriving from Malaysia's Johor and lugging suitcases onto waiting vehicles arranged by their employers.

Mogan Subrammaniam, a 28-year-old Malaysian technician who motorcycled across the border every day before the pandemic, walked over the causeway to begin a mandatory three-month stay in the city-state. "I have no choice," he said. "I have to earn money."

On the Malaysian side, Singaporean businessman Arul Nathan was on his way to visit a warehouse in Malacca, about 190 km from Johor. He said the border closure had hurt his plastics manufacturing operation, forcing some production facilities to shut down. "I will be staying in Malaysia for some time to sort my businesses here before returning," he said.

Last month, Malaysia and Singapore announced two programs to restart border crossings safely: a Periodic Commuting Arrangement that allows workers with permits to enter their country of employment for at least 90 days, and a Reciprocal Green Lane designed for short trips for essential business. The reopening comes amid fresh concerns over a more infectious strain of the virus recently detected in Malaysia, though both programs have strict rules involving COVID-19 tests, isolation periods, itineraries and contact tracing.

Officials began taking applications to cross a week ago. The Johor immigration department in southern Malaysia said both schemes had reached their maximum quotas for the first three days -- 2,000 daily for the commuting program and 400 a week, or about 50 a day, for the green lane.

Of the "travel corridors" gradually opening across Asia -- like one connecting South Korea and Indonesia, announced last week -- the Singapore-Malaysia arrangements are especially important due to the neighbors' interdependent economies. Until Malaysia entered a lockdown in March, about 300,000 residents of the country's southern region commuted to work in the city-state each day. So Singaporean employers, including semiconductor and other manufacturers with factories in the north, are eager to have some of their workers back.

The one-hour air route between Singapore and Kuala Lumpur is also one of the world's busiest international flight corridors, carrying business travelers between the two cities. At least three major airlines -- Singapore Airlines, Malaysia Airlines and AirAsia -- had flights scheduled on Monday.

Besides helping businesses begin the long road to recovery, the border reopening is reuniting families. 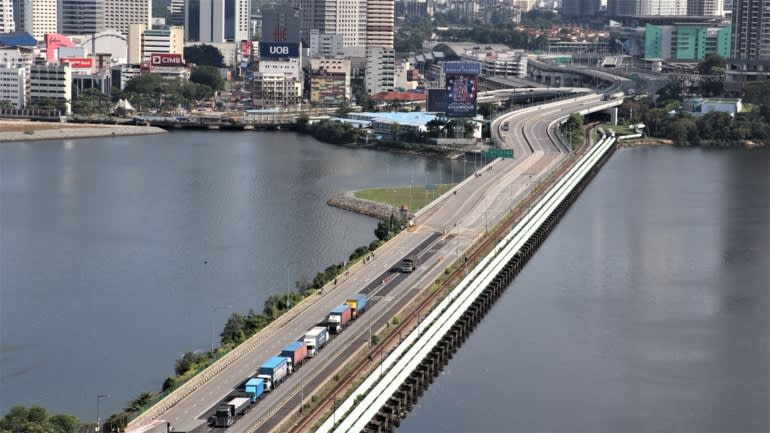 Trucks and scattered pedestrians are seen on one of the land links between Malaysia -- in the background -- and Singapore on Aug. 17. (Photo by Kentaro Iwamoto)

The Periodic Commuting Arrangement means Malaysians who dashed into Singapore just before the border was closed can finally go home to see relatives, and then return to work for the minimum 90 days.

On Monday, factory worker Meenachi Segar said she started her journey on foot from Singapore at 7.30 a.m. and reached Johor an hour later. "I have been working in an electrical [product] manufacturing factory for 16 years and I used to commute from Johor daily," she said. "When the government announced the border closure, I rushed to stay in my friend's room in Singapore."

She said she underestimated how long she would be stuck there.

"I thought the lockdown would only be two or three weeks, so I told my family to be patient until I come back. But I did not expect to see my children only after five months."

Meenachi is still employed in Singapore and is on leave for two weeks.

Lim Hui Yang, a Malaysian citizen who has been working as an accountant in Singapore for 13 years, arrived in Johor to see his aging mother and father for the first time in six months.

"The moment they opened the application, I immediately applied to come back to see my parents," he said. "I had to seek a one-month break from my office to do this, but it's all for good."

Lim said the process was seamless, but he was not thrilled about the coronavirus testing requirements for the visit. "I have to do tests on both sides which is first costly and also uncomfortable," he said.

Despite the mixture of excitement and relief on day one, the limited scope of the dual programs means their immediate impact is likely to be limited. Still, after both countries suffered steep economic contractions in the second quarter, anything that makes doing business easier is welcome. Singapore's gross domestic product declined 13.2% on the year in the three months through June, while Malaysia's plummeted 17.1%.

As of Sunday, Singapore had confirmed about 55,700 coronavirus cases, while Malaysia had detected 9,200. But officials in Malaysia are wary after finding a strain called D614G, seen widely in the West. This mutation is said to be about 10 times more infectious.

Noor Hisham Abdullah, Malaysia's director-general of health, warned in a Facebook post on Sunday that "the community needs to be more vigilant and more careful because the COVID-19 virus with the D614G mutation has been proven to be detected in Malaysia."