Shoppers in Singapore stock up on groceries on May 14, after new curbs on dining out and social gatherings were announced.   © Reuters
KENTARO IWAMOTO, Nikkei staff writerMay 18, 2021 16:54 JST | Singapore
CopyCopied

SINGAPORE -- It was only three weeks ago that Singapore was named "the world's best place to be" during the COVID-19 pandemic in a Bloomberg ranking. Residents were enjoying meals out on the town or taking "staycations" under carefully calibrated safety measures while vaccinations proceeded apace.

Now the city-state is back in batten-down-the-hatches mode as authorities fear the coronavirus is quietly spreading, possibly driven by more infectious variants. From Taiwan to Vietnam to mainland China, other parts of Asia regarded as relative "safe havens" are also scrambling to stamp out modest yet alarming outbreaks.

The infection numbers coming out of these places pale in comparison to the hundreds of thousands of daily cases reported in India, or even the thousands now seen in Japan. But the impact on key businesses like tourism and manufacturing is already being felt, further clouding the economic recovery outlook.

On Monday alone, Singapore lost two much-anticipated events that would have boosted the ailing tourism sector. First, plans to open a quarantine-free travel bubble with Hong Kong were shelved, just ahead of the scheduled launch on May 26. Then, the World Economic Forum announced it was canceling its special annual "Davos" meeting in Singapore in August, which would have attracted hundreds of participants.

In the early days of the pandemic, Singapore struggled with coronavirus clusters in packed dormitories for migrant workers. But since it contained those outbreaks, it has largely controlled the virus with tight border restrictions and domestic safety programs. The country enjoyed a stretch of months, until April, when it was reporting zero or single-digit new locally transmitted cases per day.

A cluster that emerged at Changi Airport, however, has altered the picture. Singapore reported 21 new non-imported cases on Monday. Some were found to be a variant first identified in hard-hit India. Singapore's economy has shown signs of recovering, growing 0.2% on the year in the first quarter. But Moody's Analytics warned on Monday that the food and retail sectors will be hurt by the tougher restrictions imposed until at least mid-June: Dining in restaurants has been banned and social gatherings are limited to two people.

"Travel restrictions continue to take a toll on air transport and tourism-dependent industries, while lower demand from tourists and local consumers will also impact service industries such as retail and food services," Moody's said.

To soften the blow, the government on Sunday announced new support measures, including a subsidy for restaurants using online delivery platforms such as GrabFood and Foodpanda.

Singapore is not alone. Vietnam, after more than a month without detecting new community transmissions, logged about 1,200 cases in the three weeks up to Monday afternoon. An Indian variant has been confirmed there, too, and the government has ordered lockdowns of affected areas and factory shutdowns. 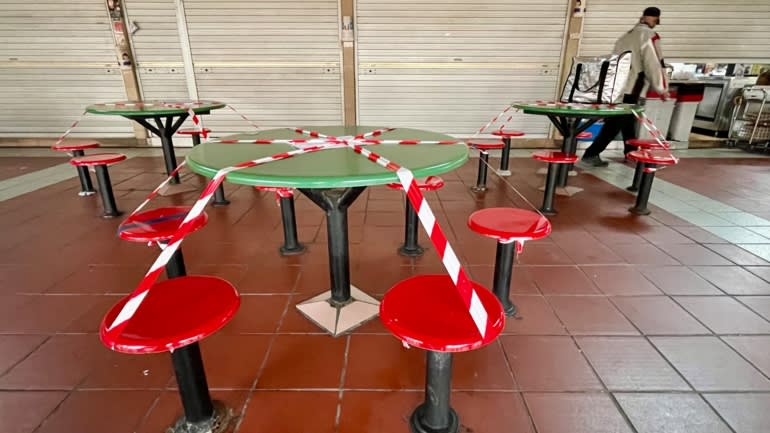 Dining in restaurants is banned under heightened restrictions Singapore imposed on May 16. Seats at this hawker center canteen are marked off limits, with many stalls closed. (Photo by Kentaro Iwamoto)

In an interview with local media outlet VnExpress last week, Kidong Park, the World Health Organization's representative to Vietnam, said there was a possibility of COVID-19 silently spreading in the community because some cases had no identifiable epidemiological relationship.

"The source of infection in some outbreaks is still unclear, along with the appearance of worrying variants," Park was quoted as saying. "The following weeks are critical in disease control work."

Taiwanese authorities are also rushing to tackle a COVID-19 surge. On Monday, 335 new cases were confirmed, breaking the island's record for a fourth day in a row. On Tuesday, the health minister announced 240 new domestic cases.

Starting Wednesday, Taiwan will ban arrivals by foreign nationals without resident certificates for one month. School classes will be online-only until May 28.

Vietnam and Taiwan's success at suppressing the coronavirus last year allowed their economies to grow faster than their Asian peers: 2.9% and 3.1%, respectively.

They already had wind in their sails from the U.S.-China trade war, which prompted some companies to shift away from Chinese production. Taiwan is a strong player in semiconductors, while Vietnam is a major producer of smartphones and other electronics.

But according to Vietnamese media and other sources, coronavirus clusters have occurred at factories of a partner company of South Korea's Samsung Electronics. A Japanese electronic parts manufacturer in the north of Vietnam has suffered the same problem. Operations have been disrupted -- an issue that could crop up more if infections continue to spread, potentially affecting exports to destinations including the U.S. and China.

Relatively slow vaccination rates only add to the concern. While about 32% of Singapore's 5.7 million people have received at least one vaccine dose -- one of the highest rates in Asia -- the figure for Vietnam's 96 million was just 1% as of Saturday, according to the website Our World in Data. Taiwan has also struggled to secure doses, having reportedly received only 300,000 so far for its population of roughly 23.5 million. Vietnam has been a pandemic success story, but its vaccination drive is off to a relatively slow start.   © Reuters

Meanwhile, in China, officials are accelerating the vaccination effort as small local outbreaks have resurfaced after a more than three-week hiatus.

The country where the COVID-19 pandemic began moved quickly last year to beat the virus and restore a semblance of normal life. The authorities remain highly sensitive to even the smallest resurgence: The country of about 1.4 billion people reported five cases on Monday, bringing the total since last Friday to 16.

The infections are confined to the Anhui and Liaoning regions, baffling officials who have been keeping watch after the recent five-day Labor Day break, when 200 million people traveled. Mass testing and inoculations have been stepped up in affected areas.

China had administered 393 million vaccine doses as of Saturday, according to the National Health Commission. The country aims to inoculate at least 560 million people, or 40% of the population, within the first half of 2021.

On Friday, China approved a vaccine made by Shenzhen Kangtai Biological Products for emergency use, bringing its total vaccine lineup to six. In Shanghai, authorities are set to extend the immunization campaign to people above 76 years old, from the current 18-75 age range.