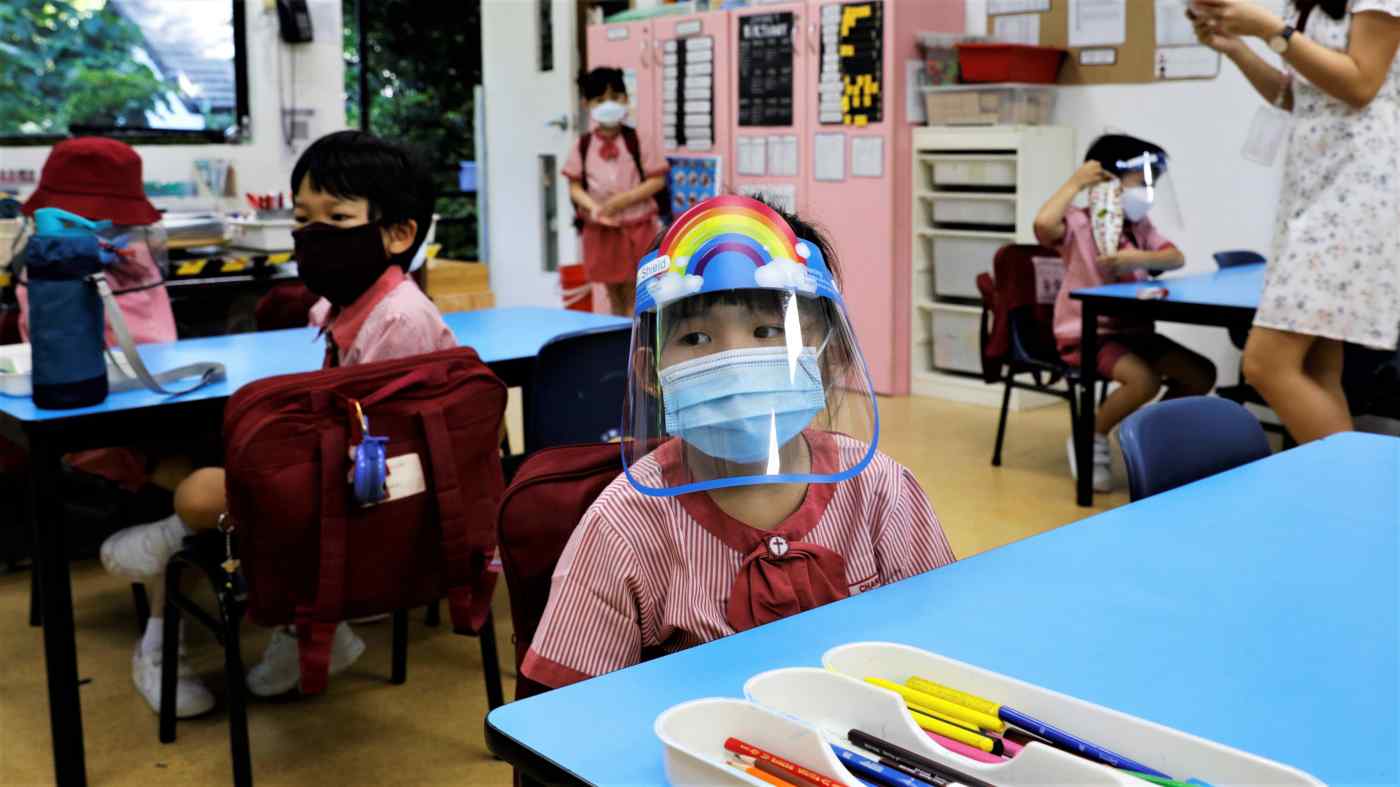 A Singaporean preschool class in the COVID-19 era: Across Asia, the pandemic is making some couples think twice about marriage and having kids.   © Reuters
KENTARO IWAMOTO, Nikkei staff writerOctober 21, 2020 14:05 JST | Singapore
CopyCopied

SINGAPORE -- The coronavirus pandemic is threatening already aging Asian economies with a baby bust, sending some governments scrambling to introduce new programs to encourage citizens to marry and have more children.

Starting this month, Singapore is offering a grant of 3,000 Singapore dollars ($2,200) for each new baby born over the next two years, through September 2022. The government also eased social distancing rules on weddings, allowing a maximum of 100 people -- including the couple -- to attend.

Japan, Hong Kong and South Korea, likewise, have a renewed sense of urgency to address their own troubling demographics, as the global health and economic crisis proves to be a romance killer.

"Some couples have indicated that they will postpone their life plans in order to focus on their financial stability and employment prospects," Singapore's prime minister's office said in a statement, citing a survey in which about 3 in 10 respondents said they would put off marriage or children because of COVID-19. The city-state is one of the many economies severely affected by the virus, with jobless rates rising and the government expecting gross domestic product to contract 5% to 7% this year.

In a place known for its high cost of living, SG$3,000 is "not very large, considering the costs of childbearing in the first year alone," according to Tan Poh Lin, an assistant professor at the Lee Kuan Yew School of Public Policy at the National University of Singapore.

"But while SG$3,000 is unlikely to influence the decision as to whether or not to have a child, it will have some influence on couples who have already decided that they want to have a baby and are only undecided as to timing," she told Nikkei Asia. She added that the two groups most likely to be affected are couples who are holding back due to short-term credit constraints, and older couples under biological time pressure.

Singapore, which counted about 39,000 births last year, has one of the lowest fertility rates among Asia's major economies. In 2018, each woman was expected to bear 1.14 children in her lifetime, putting the city-state's rate in the ballpark with South Korea (0.98) and Hong Kong (1.07), according to the CEIC database.

Japan -- known as Exhibit A of graying societies with 28% of the population aged 65 or older -- still had a fertility rate of 1.42 in 2018, after years of hovering around that level. But a decline in the number of women of childbearing age means total new births are rapidly falling. The pandemic is only adding to the strain in these and other economies -- including the U.S.

"On top of the economic impact, there will likely be a further decline in births as a direct result of the public health crisis and the uncertainty and anxiety it creates, and perhaps to some extent, social distancing," according to the Brookings Institute, a U.S. think tank.

There are already tangible signs in Asia that COVID-19 will accelerate declines in births.

In South Korea, the number of marriages fell 9.3% on the year in the first seven months of 2020, according to Statistics Korea, a government agency. Hong Kong's Secretary for Labor and Welfare Law Chi-kwong wrote on his official blog in July that the pandemic has "significantly reduced the number of registered marriages in Hong Kong, which in turn may further reduce the fertility rate in 2021."

The last thing these economies need is accelerated aging, which would further weigh on their labor forces and public finances. So Singapore is not the only one seeking ways to buoy marriage and birth figures.

Japan is looking at expanding subsidies for new married couples next year. Currently, some newlyweds -- though not all -- living in specific areas are entitled to subsidies of up to 300,000 yen ($2,800) for home rentals and moving costs. The government is considering doubling the budget for this program in the fiscal year starting from April, Tetsushi Sakamoto, the minister in charge of promoting dynamic engagement of all citizens, told reporters in an interview in late September. One plan is to raise the upper limit per couple to 600,000 yen. Newlyweds in Hong Kong in February: The city's secretary for labor and welfare warned the pandemic has "significantly reduced the number of registered marriages," which could "further reduce the fertility rate in 2021."   © Reuters

And South Korean Deputy Prime Minister Hong Nam-ki in late August announced a framework to deal with the country's "drastic population decline," according to a news release from the Ministry of Economy and Finance. The plan, which offers few details, includes promoting a "family-friendly work environment" for mothers and rehiring of women who pause their careers for child care.

Yet, Asian governments have struggled to address problematic birth trends for years, showing there are no easy answers.

The virus crisis itself has stabilized in these Asian states, allowing economic recoveries to get underway. But it will take time to return to pre-pandemic activity and the threat of new waves of infections -- as seen in Europe -- persists. A setback with the virus could lead to even more couples delaying childbirth, requiring additional support from governments as well as employers and communities.

Tan at NUS also pointed out the importance of encouraging earlier childbearing.

"Studies show that both women and men all over the world tend to underestimate the impact of age on fertility loss, and put too much trust in modern reproductive technologies," she warned. "Hence, helping families to make informed decisions by clarifying popular misconceptions is a low-cost, yet important, policy priority."