SINGAPORE -- Rapid test kits unveiled in Singapore on Friday promise to help governments worldwide assess the true spread of the coronavirus and the extent of public immunity.

The kits, called cPass, were developed after trials on COVID-19 patients in China and the city-state. They signal whether a subject has developed antibodies, or a biological response to fight the disease. This would mean they were infected at some point.

The process takes only an hour, according to the public-private venture behind the technology.

The makers -- Singapore's Duke-NUS Medical School, the city-state's Agency for Science, Technology and Research, and Hong Kong-listed biotech company GenScript -- say a positive result suggests a person is likely to have "good immunity" against the virus, potentially making it possible to sift out individuals who can safely return to normal life.

This could be a lucrative export opportunity. "It fills a space in the market where no solution exists," said Dr. Sidney Yee, chief executive of the science agency's Diagnostics Development Hub.

Singaporean hospitals will get the kits first, but the plan is to sell them around the world. The makers said that the tests have already been tried in Thailand and Malaysia as well, and that efforts are underway to bring them to the Philippines, Cambodia and Vietnam.

Interest in Asia has been "keen," they said, while 20 other countries including Australia, New Zealand, the U.K. and Germany are evaluating cPass before deciding whether to approve purchases.

Dr. Li Zhu, GenScript's chief strategy officer, said production would begin in Singapore but expand to China and the U.S. For now, he estimates it is possible to produce 1,000 kits per week, and that each one can handle 90 tests.

The price remains a question mark, though Li said it would be revealed at the "right time, probably soon." He argued the innovation "deserves a premium price."

Still, it may prove to be more efficient and economical than other options.

"There are plans to use serological tests in many cities, including Singapore, once their effectiveness is confirmed, as they are faster and cheaper to perform," said Eric Yap, associate professor of human and microbial genetics at Singapore's Lee Kong Chian School of Medicine, referring to the process of checking for virus antibodies. Testing for COVID-19 itself typically takes three to four days.

Peter Preiser, a professor of molecular genetics and cell biology at Singapore's Nanyang Technological University, cautioned that the antibody kits have a crucial limitation.

"The test provides information about whether a person has been infected and whether they have protective antibodies but does not provide information on whether the person is still infected," Preiser said.

On the bright side, he added, immune responses can normally be detected long after the virus has been cleared from the body. 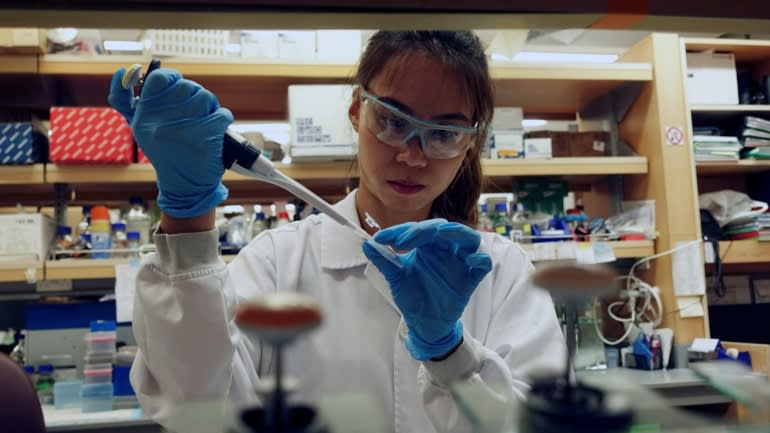 A researcher at Singapore's Duke-NUS Medical School: Experts stress that antibody tests confirm whether a person had the coronavirus, but not whether they are still infected.   © Reuters

They say the cPass tests, in contrast, involve merely drawing a small blood sample and can be performed in labs without biosafety containment measures.

"If you need large-scale testing to determine herd immunity and determine this 'immunity passport,' that means that the current tests using lab material are not only expensive, not safe, but could not cope with the volume," said Professor Wang Linfa, director of the Emerging Infectious Diseases Program at Duke-NUS Medical School.

The public-private partnership joins MiRXES, a Singapore-headquartered biotech company, in stepping up production of diagnostic kits for export. MiRXES makes a product called the Fortitude Kit, which detects the SARS-CoV-2 virus that causes COVID-19.

The company told Nikkei that its kits have been deployed in more than 20 locations across the Asia-Pacific region and North America, including Hong Kong, New Zealand and the U.S. It said there is interest in Japan, Panama, Colombia, Mexico, Indonesia, Vietnam and Saudi Arabia, where regulatory approvals were pending.

"When MiRXES started manufacturing the Fortitude Kit, we were making around 100,000 tests a week. Since then we have been gradually ramping up our capacity and are now producing in excess of 400,000 tests per week," said Dr. Zhou Lihan, the company's chief executive.

Two other Singapore biotech labs, Camtech Diagnostics and JN Medsys, have also developed COVID-19 test kits and are shipping them to India, Indonesia, the Philippines, China and Malaysia.