As economy reopens, officials rely on QR code scans at thousands of locations Checking in will not be required at parks -- but it is still encouraged. (Photo by Kentaro Iwamoto)
KENTARO IWAMOTO, Nikkei staff writerMay 11, 2020 14:22 JST | Singapore
CopyCopied

SINGAPORE -- From the early days of the coronavirus crisis, contact tracing has been a core element of Singapore's containment strategy. Now the city-state is raising its tracking game.

Come Tuesday, visiting a shopping mall, entering a factory or even getting a haircut will entail a mandatory online check-in. This system, called SafeEntry, will be introduced gradually in taxis hailed on the street and other places as well, as the country begins to reopen.

SafeEntry, together with other technologies, is a tool that enables the government to "have the information we need for effective, faster contact tracing, as Singapore progressively reopens the economy," National Development Minister Lawrence Wong said in an online news conference on Friday.

Singapore's "circuit breaker" shutdown period remains in effect until June 1, but the government is allowing some businesses to unlock their doors early, including laundry services, barber shops and certain manufacturers. Many of them will have to first create their own SafeEntry QR code on a government website and paste it at their entrances.

As of Saturday, the codes had already been placed at over 16,000 locations, such as supermarkets. Retailers where customers are likely to have only brief contact with others, such as convenience stores, are not required to implement the system but are still encouraged to do so.

Likewise, checking in will not be required in public places like train stations and parks, where people are generally on the move. Nevertheless, it will be advised. Some parks have begun displaying the codes. 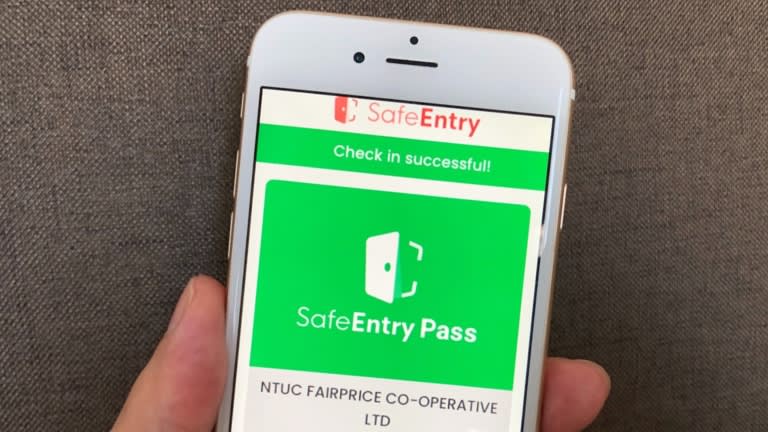 Visitors receive a SafeEntry Pass after checking in with the system. (Photo by Kentaro Iwamoto)

Other Southeast Asian countries like Vietnam, Malaysia and Thailand are also moving to restart businesses to varying degrees, relying on precautions like face masks and careful distancing in restaurants. Singapore -- where cases last Wednesday surpassed 20,000, the most in the region, due to clusters in migrant worker dormitories -- is using the souped-up tracking to complement low-tech safeguards and an existing coronavirus app.

When the coronavirus threat first emerged, Singapore traced potential patients with the help of the police. In March, it launched an app called TraceTogether, which works by exchanging Bluetooth signals between mobile phones in proximity. It was one of the first governments to introduce its own tracking app to fight the virus.

Yet, while about 1.4 million people have downloaded TraceTogether -- a quarter of the population of 5.7 million -- it has its limitations. To be truly effective, an estimated three-quarters of the population would have to download it, since it can only detect other TraceTogether users. Plus, users have to remember to keep their phones' Bluetooth switched on. SafeEntry offers a workaround. Plus, while TraceTogether requires only a phone number to register and stores the encounter data locally, the new system collects more detailed information and sends the data to the government.

"The two systems in Singapore complement each other, and potentially are synergistically more effective, especially if data collected from them are merged," said Leong Thin Yin, a professor at the Singapore University of Social Sciences.

The extensive tracking could raise privacy concerns -- something the government seemed to acknowledge by stressing that SafeEntry data will be used solely for contact tracing and only by authorized personnel.

Leong was not expecting much controversy. "The Singapore citizenry and residents trust the government, and hence, it would not be a challenge to implement SafeEntry, especially during a crisis," the professor said, adding that the city-state has a legal framework for protecting personal data and that government ministries and agencies themselves will use the system.

Anyone who fails to comply risks legal trouble.

Guidelines issued by the Ministry of Trade and Industry last Wednesday state: "All businesses must put in place the necessary safe management measures to minimize crowding within their premises and ensure high sanitation and hygiene standards." Where required, this includes "implementing SafeEntry at the workplace and encouraging employees to download and activate the TraceTogether app."

Businesses that do not follow the rules will face penalties under the COVID-19 act, the government says. SafeEntry QR codes are displayed outside a supermarket. Businesses that fail to comply could face penalties. (Photo by Kentaro Iwamoto)

Wong on Friday said the city-state's tech team is working with Apple and Google -- the iOS and Android operators -- as well as other companies to develop more effective methods, such as a new app.

The minister said new options could be separate from smartphones, for those who do not carry one. "We are also looking at possibilities like a wearable, a dongle that people can carry with them when they go out," he said.

"When we are ready with a solution, we will explain what that solution is," he added, "and we will want everyone to pick it up."