SINGAPORE -- A coronavirus-induced labor shortage is deepening in Singapore, where fears of explosive outbreaks in South Asia prompted the government to cut off flows of workers the city-state relies on.

Foreign nationals comprise about a third of the total workforce in Singapore. Sectors such as construction and shipbuilding depend heavily on low-cost labor from India and Bangladesh, in particular. But even before the authorities stopped entries from India in late April and other South Asian nations in early May, departures and tighter travel rules were keeping foreign workers away.

The crunch has already led to delays of construction projects by as much as a year, pushed up the price of labor as much as 30% and sparked worries over excessive workloads -- straining Singapore's economic model.

"Some workers have even told us that they have been forced to work double shifts, each shift eight hours, for at least half the week since last year," said Desiree Leong, casework manager at the Humanitarian Organization for Migration Economics, a local rights group.

In 2020, the number of migrant workers toiling at Singaporean building sites, shipyards and factories plunged 16% to 311,000, according to government statistics as of December. The total number of international workers, 1.23 million, was down 14%, including other blue-collar workers as well as white-collar staff.

Then came the bans on short-term travelers and long-term pass holders from South Asia, which remain in place even though India's deadly coronavirus surge has eased.

Although the government last week maintained its annual growth outlook for this year at 4% to 6%, versus last year's 5.4% contraction, it warned the recovery's speed would be uneven across industries and flagged the manpower shortage as a drag on construction. 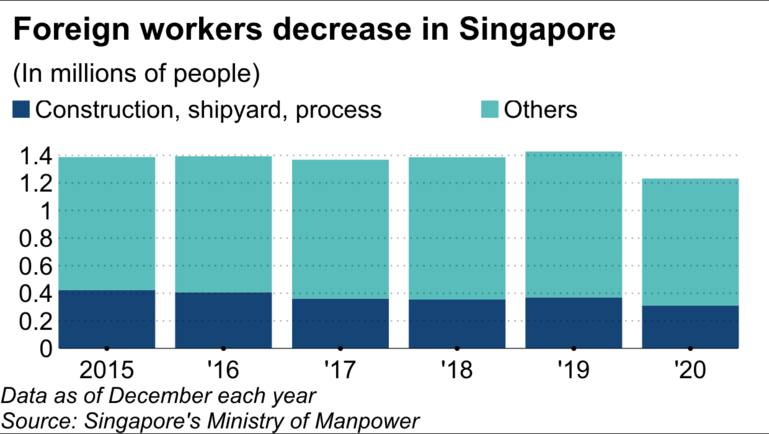 "Recent border restrictions on the entry of foreign workers from South Asia will exacerbate ongoing severe labor shortages at construction worksites and shipyards," the Ministry of Trade and Industry said.

Economist Selena Ling at Oversea-Chinese Banking Corp. stressed, "The recovery prospects for these impacted industries have been delayed to say the least, and may continue to be mired below pre-COVID levels by the end of this year."

The construction sector shrank 36% in 2020. Coronavirus clusters in crowded worker dormitories -- about 88% of the country's 62,000 cumulative infections have been among dorm residents -- dealt a heavy blow, shutting down many work sites. But while the dormitory situation has stabilized, the industry's decline continued in the first quarter of 2021, with a 23% year-on-year fall.

The pandemic's impact on worker flows is not Singapore's problem alone. Vietnam's plans to send 500,000 workers abroad in the five years through 2025 are in doubt, partly due to border restrictions in key destinations like Japan.

Still, the city and its employers are especially exposed.

Due to competition over increasingly limited labor, the median wage for migrant construction workers in March was 15% to 30% higher than pre-COVID levels, National Development Minister Desmond Lee told parliament last month. He also noted that the number of workers was projected to fall in the coming months given the pandemic's persistence.

Industry groups are urging the government to reopen the border for South Asian workers. They argue housing, hospital and transit line projects will be "badly disrupted" if the entry ban continues.

Safety is also a concern, due to long hours.

The Humanitarian Organization for Migration Economics says some migrants are reporting working 14 to 16 hours a day and six days a week. In a joint statement dated May 17, nine construction-related industry organizations warned that the current workforce is "already working at maximum capacity, increasing the risks of workplace incidents."