SINGAPORE -- The Singaporean government is fighting a relentless wave of COVID-19 infections, with daily cases topping 3,700 for the first time on Saturday despite a full vaccination rate above 80%. The crisis has ensnarled key ministers tipped as potential leadership candidates in a battle to manage public fears and expectations.

The city-state's long-term plan is to "live with" the coronavirus as an endemic disease like the flu, backed by widespread jabs. The vaccines are largely working as advertised, and Prime Minister Lee Hsien Loong on Saturday stressed that Singapore "must press on" with the strategy while taking precautions.

"Singapore cannot stay locked down and closed off indefinitely," Lee said in a televised address, as the city-state revealed plans to reopen its borders further. "It would not work, and it would be very costly."

But as the case numbers rise and the death toll creeps above 160, there are signs of public uncertainty and unease. For the government ministers tasked with guiding the way -- including prime minister hopefuls -- the pressure of balancing safety and economic considerations is growing as online petitions criticize their performance. For the rest of the world, Singapore is becoming a case study in communication and the challenges of preparing a population to coexist with COVID.

Eugene Tan, a 37-year-old researcher, is one resident struggling to shake worries about the virus despite living in one of the world's most vaccinated countries. As cases climbed, he pulled his three children out of preschool.

Part of his concern was that the children, all under 5, are in an age group that has not yet been approved for shots. Their grandparents, among the most vulnerable to breakthrough infections, care for the kids on a daily basis. But Tan also feels the government's evolving strategy has left the public unsure.

He recalled how last year officials would "go hard on the brakes" on social activity whenever there was an outbreak. This time, they have stopped short: In late September they reintroduced limits on gatherings and dining out to two people, explaining they needed to buy time to scale up health care capacity. But they have not reimposed sweeping restrictions, avoiding the "zero tolerance" policies still seen in some parts of Asia, such as mainland China.

"While the government has tried to prepare Singaporeans for an increase in cases and justify its rationale for opening up, I think it has misjudged how the public would accept the trade-off of increased death rates and critical illness," Tan said. "With the current wave, the tweaking of its own policies suggest that the government seems to be playing catch-up on the worsening COVID situation, while still wanting to capitalize on opening up." 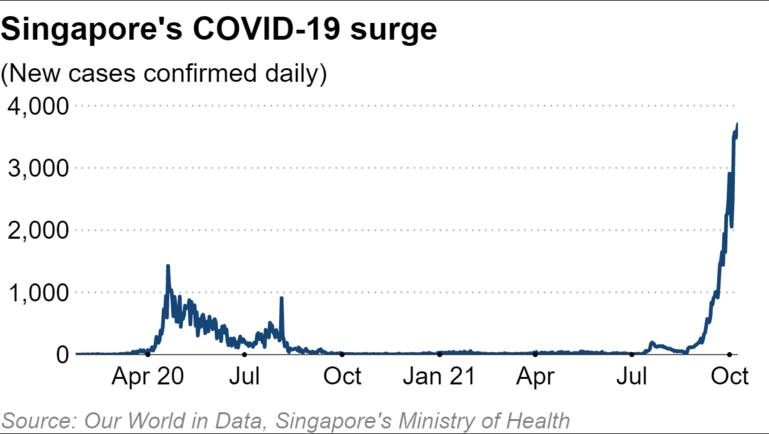 "As Singapore has agreed to choose ... living with COVID, it does not mean that you should just leave everything and allow this situation to blow up," reads a petition on the website change.org, calling for Ong to resign over the infection surge. It had gathered over 8,000 signatures as of Monday morning.

Another petition called for Wong and Gan to quit -- but for the opposite reason. It charged that they lacked the "will" to follow through on living with endemic COVID. This petition, however, gained little traction, managing well below 100 signatures.

Many, like Singaporean financial adviser Michelle Ngiam, recognize the tight spot the ministers are in. "They are doing what they can to the best of their ability," Ngiam said. "They are also limited by certain factors like manpower and available resources so we can't expect them to be perfect."

But experts do see the situation testing the upcoming leaders' standing in the eyes of the public. "With zigzagging policymaking, they risk losing [the] favor of the electorates that prefer more certainty, which is one of the features the government once had," Yu Liuqing, country analyst at the Economist Intelligence Unit told Nikkei Asia.

Yu argued Wong and Ong should still be seen as good policymakers and technocrats, with their calibrated approach to containing COVID. But he said public trust "is expected to have deteriorated a little amid the oscillation of policy approach between 'containment' and 'freedom.'"

He also suggested public guidance on the changing strategy may have been "inadequate" -- "failing to manage the expectation of this wave of COVID-19 and [to] fully destigmatize COVID-19."

Put another way, Singapore wants to live with the virus, but the public may not be primed to accept what that means.

Official statistics over the past month or so show 98% of cases had no or mild symptoms, indicating the Pfizer and Moderna jabs Singapore has used are working to prevent severe infections. To allocate resources to those most in need, the authorities are letting fully vaccinated people with nonserious cases recover at home. "With vaccinations, COVID-19 has become a treatable, mild disease for most of us," Lee said on Saturday. 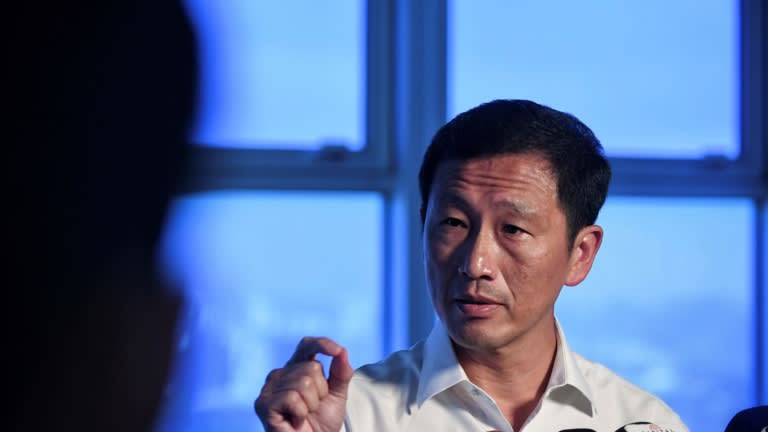 Singaporean Health Minister Ong Ye Kung and other coronavirus task force ministers are in the spotlight over the government's "living with COVID" strategy.   © AP

Yet with the government urging the public to regularly self-test for COVID -- kits are available from vending machines -- medical helplines and facilities have been inundated with inquiries from alarmed residents who tested positive. This has put extra, some might say unnecessary, stress on the health system.

"We are still very afraid of the virus despite the low numbers of serious infections reported every day," observed Paul Tambyah, president of the Asia-Pacific Society of Clinical Microbiology and Infection in Singapore.

At the same time, Tambyah noted that around 1,500 COVID patients have ended up in hospital wards in recent weeks. That, he said, is equivalent to "about one and a half general hospitals, which is quite a significant impact."

"I think that people have a lot of questions and it would be good to have these answered in a frank and open way," Tambyah said.

Health Minister Ong, who has stressed that the delta variant "doesn't follow our script," has pledged to work out kinks in the government's response. He acknowledged in parliament recently that the home recovery initiative was not ready to deal with the surge in COVID-19 patients. He has also warned that the country should brace itself for a possible scenario with 5,000 cases reported a day.

Ong's colleague Wong, on the other hand, has tried to assure Singaporeans they need not be alarmed, since severe cases are likely to remain limited. He has also sought to "destigmatize" the virus, as the EIU's Yu suggested. "There's nothing to be embarrassed about if you catch COVID," Wong said earlier this month. "Sooner or later, many of us will end up catching the virus, but we will have zero or mild symptoms."

Lee on Saturday appeared determined to set the record straight and calm a worried public. He acknowledged that "many have found it difficult to keep up with new policies and changes to measures," and that "'living with COVID-19' has not been a smooth and easy journey."

He warned the government "may have to tap on the brakes again if cases again grow too fast." But he called for a change in mindset.

"We should respect COVID-19," Lee said, "but we must not be paralyzed by fear."