SINGAPORE -- Singapore on Wednesday opened a new travel corridor that allows people who are fully vaccinated against the coronavirus to enter the country without undergoing quarantine, a move the government sees as a crucial to its economic recovery.

But the long-awaited scheme has been overshadowed by the rising number of domestic COVID-19 cases. Even though more than 80% of the city-state's residents have been vaccinated, new daily cases on Tuesday reached their highest level in a year, prompting the government to urge residents to curtail their social activities.

The new scheme, called the Vaccinated Travel Lane, will first cover travelers from Germany and Brunei. Most arrivals are expected to be from the European country, given the size of its economy. Germany was chosen first due to its high vaccination rate, relatively stable COVID situation and connections to the city-state.

The German community in Singapore is enthusiastic about the new program. "I am very excited, as I have not traveled since March 2020, and all the routines are gone," Kirsten Moench, who works at German European School Singapore, told Nikkei Asia on Tuesday before flying to home Germany. She plans to visit her family for two and a half weeks. Her return flight is designated for the quarantine-free scheme. According to the German Embassy, nearly 2,000 German companies are represented in Singapore and an estimated 8,000 Germans live in the city-state.

Semiconductor maker Infineon Technologies, which has a regional headquarters in Singapore, expects to see more business travel between the two countries over the next three months. "There was a high level of interest within the company when the scheme was announced," a spokesperson said.

Travelers using the new travel lane must have remained in their country of departure and/or Singapore in the last 21 consecutive days before their departure for Singapore. They are also required to take PCR tests before departure and on arrival at Changi Airport. They must also take tests on the third and seventh day of their stay in Singapore.

Opening the borders brings a higher risk of imported COVID-19 cases. As such, the Singaporean government has been cautious, saying it would move "step by step," and hopes to expand the quarantine-free program to other areas in the coming months.

Domestically, however, new COVID-19 cases are rising rapidly. Daily new cases, including four imported ones, reached 332 on Tuesday, their highest point since August last year. Singapore had a seven-day rolling average of 34 new cases per million people as of Monday, higher than Indonesia's 28 and India's 29, according to the Our World in Data website.

The recent surge comes after Singapore eased restrictions last month. Since Aug. 10, fully vaccinated people have been allowed to dine at restaurants in groups of up to five people. With 80% of its population already having received two vaccine doses, more people are eating out. 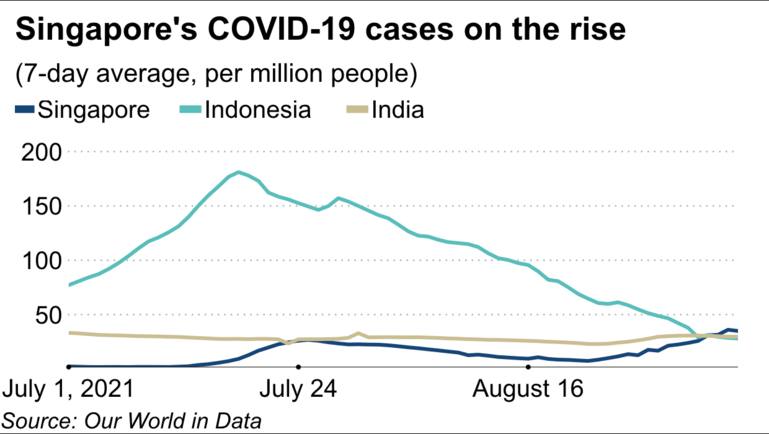 Singapore has shifted its focus from total new cases to people with severe illness, the number of which has stabilized at around 30 people. Still, the government is sending alerts, as the majority of recent cases have occurred among fully vaccinated people.

"If we continue on this trajectory of infection, it means we could have 1,000 cases in two weeks, or possibly 2,000 cases in a month," Finance Minister Lawrence Wong, who co-chairs the government's coronavirus task force, told reporters on Monday, saying the government will increase testing at workplaces.

Authorities are now strongly encouraging people to cut back on nonessential social activities for the next two weeks. Starting Wednesday, social interactions at workplaces will be prohibited as well.

These measures are primarily aimed at residents, but if hospital capacity becomes stretched, it could affect the pace at which border controls are relaxed.

Wong said the government would not halt any of the programs announced, including the Vaccinated Travel Lane, but he called for residents to help reduce transmission of the virus. "If we all work together, and continue to cooperate with one another, we will be able to manage our risks and reopen safely."