Singapore stress levels show working from home is no holiday

SINGAPORE -- The emails come at 9 p.m., and Claire Ng feels obliged to respond right away. The 29-year-old communications executive in Singapore has been putting up with this for months, since the government urged telecommuting as a coronavirus safety measure.

She used to clock off at 6 p.m. most evenings. But now she feels like her superiors expect staff members to be on call round-the-clock.

"The bosses think that I can work anytime, as I am stuck at home," Ng said. "On weekends and public holidays, I am also expected to do work for the same reason. Most of the time, the bosses want the work done immediately."

Ng's experience is shared by workers across Asia. Even as Singapore and other economies reopen, precautionary telecommuting remains common. And while the opportunity to work from home has been a gift for some, others say the line between their professional and personal lives has blurred -- contributing to higher stress and raising important questions about the future of work in the post-pandemic era.

A recent study by Cigna, a U.S. health services company, found anxiety levels increased among workers in Singapore, Thailand and Hong Kong after governments closed parts of their economies and telecommuting swept the region.

Cigna found that 63% of respondents in Singapore said they suffered from work-related stress in April, versus 58% in January, before shutdown measures were imposed. In Thailand, 52% reported feeling stressed, up from 48%. Hong Kong's ratio ticked up to 47%, from 46%.

The survey covered 10,200 respondents in the three locations plus mainland China -- which appeared to be an exception, with work stress holding steady -- along with Spain, the United Arab Emirates, the U.K. and the U.S. In Singapore, Hong Kong and Thailand, over 70% of respondents in each place described an "always on" work culture. Singapore's ratio jumped to 78% in April, from 72% in January, while Hong Kong's rose to 72% from 68% and Thailand's inched up to 96% from 94%.

"Our data demonstrates that even before the pandemic, it was already very common to be 'always on,' constantly plugged-in around the clock, making sure that we do not miss work calls, emails and messages," Jason Sadler, president of Cigna International Markets, told Nikkei. But with COVID-19 restrictions further blending work and home life, he said "the rise in 'always on' work culture does not come as a surprise."

China's work-related stress levels hovered at 58% during the survey period, though Cigna explained this was likely partly a matter of timing. China was the first to go through the lockdown process to curb infections, meaning the survey in the first quarter did not capture stress in the country before the outbreak escalated.

In addition, Chinese workers were already accustomed to communicating frequently outside the office, Sadler noted.

"Working hours have tended to be less flexible in China and the work-from-home arrangement was a widely welcomed measure," he added. "Mobile apps such as WeChat are well-established and often used to communicate with colleagues even before the pandemic." 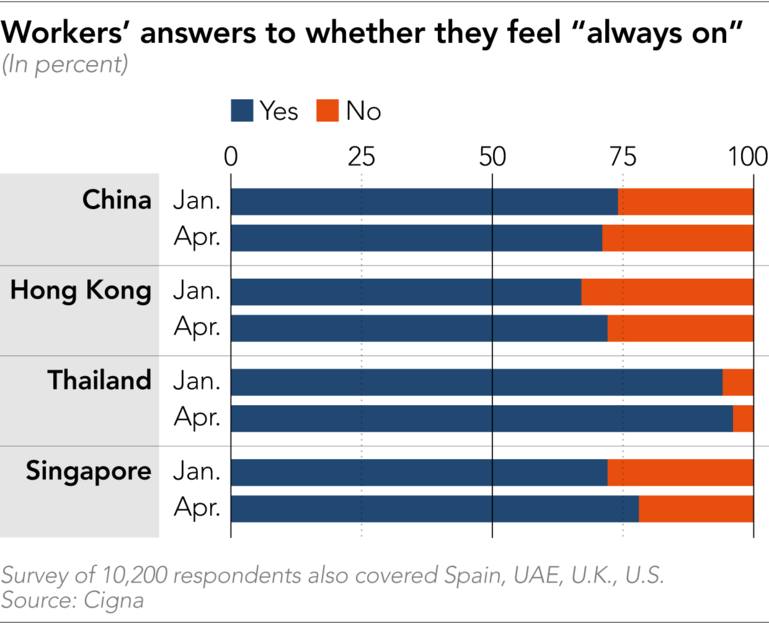 For many workers in Asia and worldwide, though, the crisis has "drastically transformed" the way they do their jobs, noted clinical psychologist Joyce Chao. She told Nikkei that it is up to both companies and workers themselves to strike the right balance.

"While we think that the 'always on' culture will persist due to our familiarity with being constantly connected," Chao said, "the pivotal role of ensuring workplace well-being falls on both employers and the individual."

This is no easy task when workers are handling personal and business commitments in the same physical setting. Gifford Chan, principal clinical psychologist at Singapore's Mind Care Therapy Suites, said this factor alone can be enough to induce stress.

"At home, an employee could also be a parent, a caregiver to elderly parents, a sibling, a teacher to children, a cook, and domestic helper," Chan said.

"It is difficult to juggle being a manager and being a mother in the same place and at, literally, the same time. This lack of role clarity creates mental stress for the individual, which can spill over to create stress at work."

Employers should check in with their staff on how they are coping with work-from-home arrangements and offer support if necessary, advised Huang Zhang Jin, clinical psychologist and supervisor at the Singapore Psychological Society.

"Norms in the office should not be duplicated for employees working from home," she said. "While it may be considered professional to keep personal matters separate from office, it is unfair to expect employees to oust their family from their home to make space for work."

Employees like Ng just want clearer boundaries and a chance to catch their breath.

"I have meetings during the lunch hour," Ng said. "There is no clear distinction anymore for a lunch break."