The city-state on Thursday reported 910 new COVID-19 cases, up from 133 on the day of Lee's announcement. Thursday's figure was Singapore's highest since May 2020, when almost all patients were migrant workers living in dormitories.

This time, virus clusters have emerged across the nation, from shopping malls and nursing homes to dormitories and bus stations. The number of patients in severe condition is edging up.

In recent months, the government has devised a plan to "live with COVID-19," accepting the virus as an endemic disease that won't be eradicated but can be managed. But the rise in cases is testing that strategy, and the rest of Asia is looking to see what happens next in the region's most-vaccinated country.

What's behind the spike in COVID-19 infections?

As vaccination rates in the country climbed to around 70%, authorities progressively eased restrictions on social activity starting Aug. 10, including permitting groups of up to five inoculated people to dine at restaurants. They also allowed up to 50% of employees to return to workplaces on Aug. 19 -- a shift from urging companies to allow staff to work from home.

Toward the end of August, daily reported infections crept up from double digits into triple-digit territory.

Kenneth Mak, the Health Ministry's director of medical services, explained the rapid rise in infections reflects community spread as social interaction increases. "We have identified transmission occurring in workplace, social and household settings, contributing to the large clusters that we had to deal with," he said in an update on Sept. 10.

"These transmissions may have been facilitated by the increase in mask-off, close physical interactions occurring between individuals and among groups of people," Mak added. 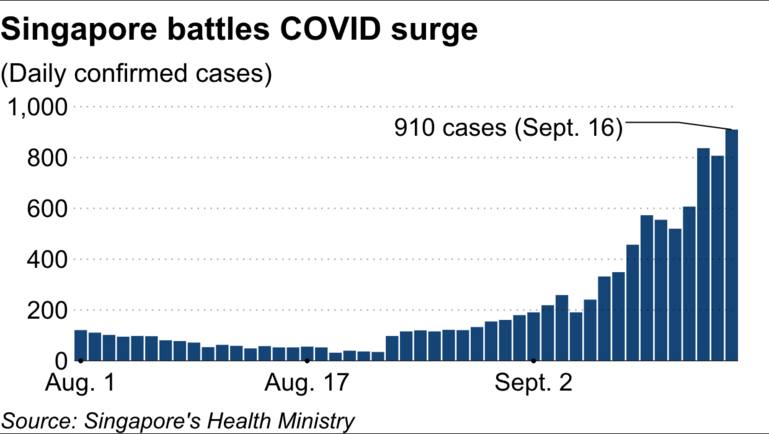 As seen in many countries, vaccines are not perfect at preventing infection.

"There was a recognition that there would be a surge in cases, especially if mildly infected vaccinated people were spreading the virus," Paul Tambyah, president of the Asia-Pacific Society of Clinical Microbiology and Infection (APSCMI) in Singapore, told Nikkei Asia. "I am not sure that the public realizes this, and clear messaging is needed to ensure this comes across."

Who is getting infected, and where?

Workplaces have been linked to the most significant clusters. Multiple bus stations have had clusters involving over 100 cases, with the virus transmitted among drivers and staff.

A shopping mall had a cluster that grew to more than 300 cases, with the ministry saying the virus spread among staff, visitors and their close contacts.

Is the medical system under strain?

Hospitals are not overwhelmed, but the government is cautiously monitoring capacity.

As of Thursday, 837 patients were in hospital, with 77 requiring oxygen support and 12 in intensive care.

Last week, Health Minister Ong Ye Kung said the government wants to keep the number of ICU cases below about 300 and said it is watching the trajectory. To limit the burden on hospitals, the authorities on Wednesday began allowing some patients to recover at home. They must meet several criteria to be eligible: they should be fully vaccinated, aged 12 to 50, and have no or mild symptoms. If the official strategy is to "live with COVID-19," what is the government doing to contain the spread?

Given the outbreaks in workplaces, the government has banned social gatherings at places of business, such as in canteens. Otherwise, it has not imposed significant restrictions, simply calling on residents to reduce social interactions themselves.

This is all based on "living with COVID-19." The government remains committed to moving beyond its past "zero COVID-19" approach, treating the virus as a risk to be managed like less-threatening endemic illnesses such as influenza. It hopes to continue reopening while keeping infections in check.

"It would be reasonable to continue opening up as the people are getting a bit tired of the restrictions," he said. "Unless there is solid data to justify specific restrictions, it will be harder to get buy-in for blanket restrictions which may not actually work."

Still, the government has not ruled out tightening rules again, depending on how much pressure the medical system faces.

The resumption of cross-border travel is crucial for the tiny city-state, which has positioned itself as a regional business and transportation hub. As such, the government has been striving to allow safe travel. Last week it launched "vaccinated travel lanes" for fully inoculated visitors to enter without quarantine, starting with passengers arriving from Germany and Brunei.

The government has said it does not plan to stop the program, but it is unclear when it will be extended to other countries of origin.

Also last week, the government said that for the time being it would not push for a further resumption of economic activity -- hinting an additional easing of border rules could also be delayed.