Meeting friends in city-state can now cost you $7,000 or 6 months in jail

SINGAPORE -- Japan and Singapore both stepped up their coronavirus containment measures on Tuesday, aiming to dramatically reduce social contact between citizens. A vast gulf, however, separates them when it comes to enforcement and the consequences for those who defy the orders.

Singapore began a four-week period of restraint, during which nonessential workplaces and schools will be closed and residents will be expected to stay home as much as possible. An order implemented on Wednesday, based on a new law passed the day before, includes a ban on meeting friends and relatives.

"A person must not meet another individual not living in the same place of residence for any social purpose," without special permission, the government's order says. Inviting guests into one's residence is also prohibited.

Going out to buy essentials or see a doctor is still allowed. But people "must keep a distance of at least 1 meter from any other individual in any public place or common property of any subdivided building," according to the order.

"For our enhanced safe distancing measures to work, we need members of the public to take the measures seriously," Health Minister Gan Kim Yong said in parliament on Tuesday, explaining the law known as the COVID-19 (Temporary Measures) Act. "We need to send a strong signal to those who are egregious in flouting the measures, as they are putting not only themselves but others at risk."

That the new legislation passed the same day it was submitted to parliament speaks to the dominance of the ruling People's Action Party, and its ability to respond to the pandemic however it sees fit.

Keeping watch across Singapore are more than 2,000 social distancing "ambassadors" and enforcement officers, according to the environment ministry. They will be checking public venues like parks, transport networks and community centers. A Singapore social distancing "ambassador" spreads the word about the rules on April 3.   © Reuters

On Tuesday alone, before the order, the ministry said about 7,000 written advisories were issued to people seen breaching safe distancing measures -- for example, while lining up at food court stalls.

Singapore is not the only place in Asia that is strictly limiting social contact and charging hefty penalties.

Anyone who breaks Malaysia's movement control order -- a nationwide lockdown in force until April 14 -- could face a fine of up to 1,000 ringgit ($230) or six months in prison, or a combination of the two.

And in Hong Kong, where gatherings of more than four people have been banned, police have handed out 2,000 Hong Kong dollar ($258) fines to elderly chess players and others caught in large groups, local media reported. 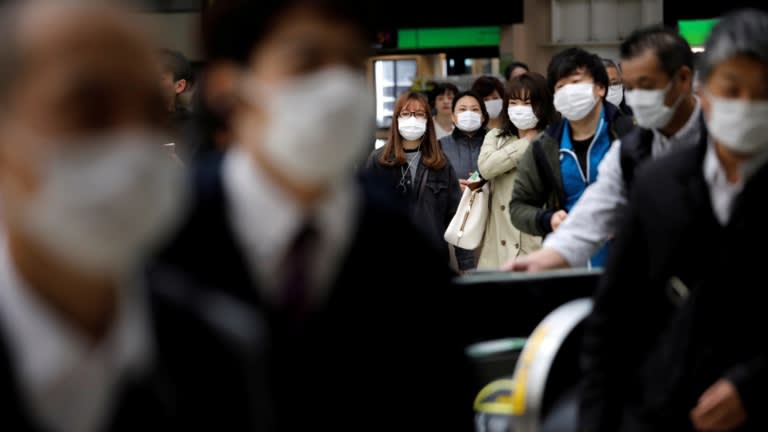 A not-exactly-empty train station in Tokyo on April 8: Japan has declared a state of emergency in seven areas but there are no penalties for defying the authorities' requests.   © Reuters

Japan, meanwhile, stands out for its leniency.

The government on Tuesday declared a state of emergency in seven of the country's 47 prefectures, including Tokyo. Nonessential businesses are expected to shut down for a month, while residents are asked to refrain from non-urgent comings and goings.

But on Wednesday, a day after Prime Minister Shinzo Abe held a solemn news conference stressing the importance of the measures, the streets of the capital were far from deserted.

After all, the Japanese authorities can ask people to stay home. But unlike in Singapore and other Asian countries, they have no legal power to enforce the requests with stiff fines and jail time.