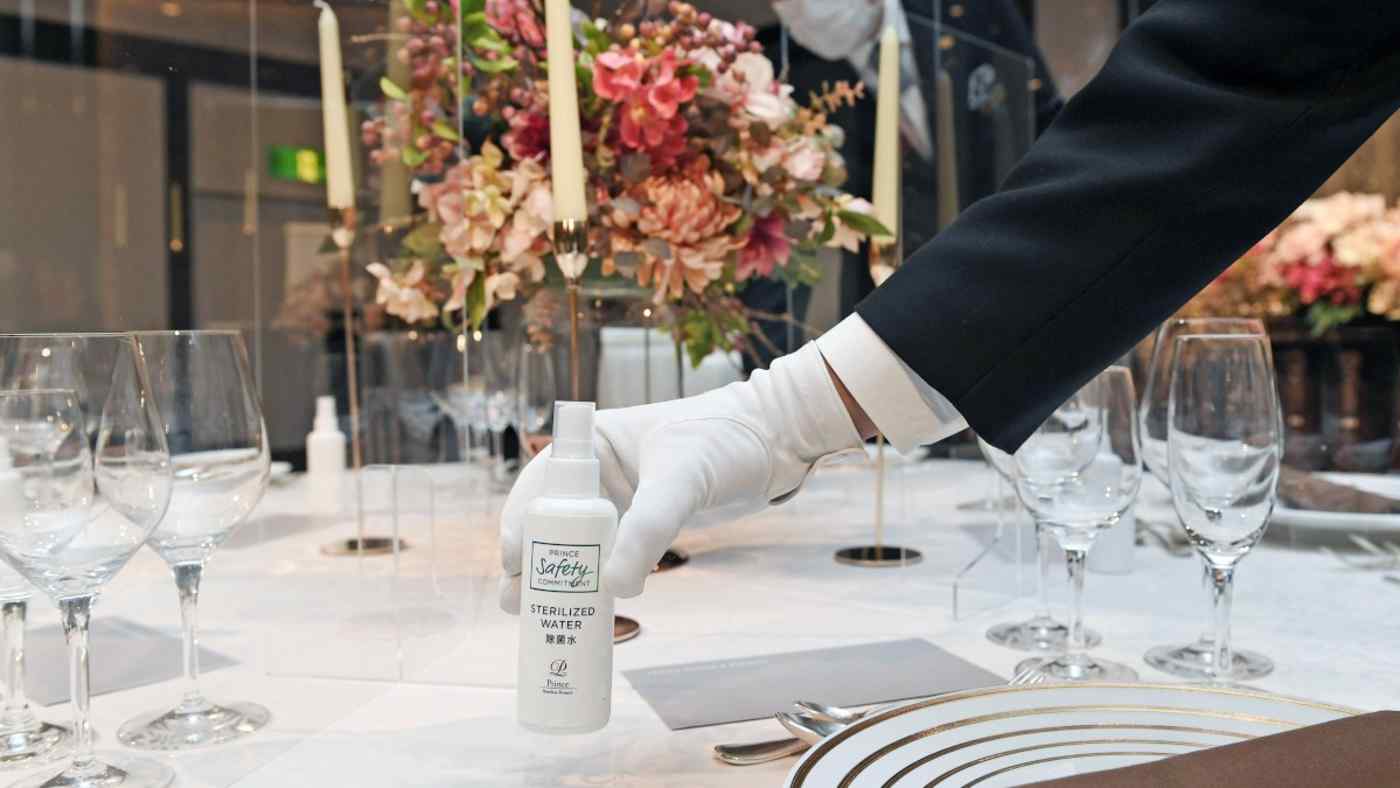 TOKYO -- For those looking forward to be June brides next month, the government's decision to extend the state of emergency for the capital and other parts of Japan was deeply disappointing.

Wedding halls in the affected areas are likely to decline to serve alcohol, so couples will have to do without toasts -- at least alcoholic toasts -- in their once-in-a-lifetime celebrations.

"I thought we'd be fine if it was in June," said a 20-something man who had scheduled his wedding in Osaka for June 5. The reception, originally slated for February, had already been postponed once before because of the previous emergency declaration.

He had planned to treat guests to sake on the day of the wedding, but the venue will likely face pressure to avoid providing alcoholic beverages.

The current emergency declaration was initially imposed in Tokyo and greater Osaka on April 25, and gradually expanded and extended. This man had been asked by the venue about postponing the reception again but decided to wait for the decree to be lifted, trusting government assurances that this would be a short-term period of intensive coronavirus countermeasures.

"Things have come up at work, so it's hard to postpone it again," he said. "This is a once-in-a-lifetime occasion, and I feel so awful about it."

Japan's Bridal Institutional Association estimates that about 280,000 couples had weddings delayed or canceled in fiscal 2020 over the pandemic. Ceremonies and reservations for the April to September of 2021 rebounded to 94% of levels from the same period of 2019, but the extension of the emergency decree will throw a wrench into many couples' plans.

Of the reservations booked before the emergency decree for May and June at hotels affiliated with Prince Hotels, about 10% have already been pushed back.

The company has stopped offering alcoholic beverages in areas covered by the state of emergency and under other escalated COVID-19 measures, but it hopes to win over customers with an expanded lineup of nonalcoholic drinks.

Prince Hotels had waived fees for changing dates or attendance figures for weddings scheduled from April on and intends to continue offering similar flexibility for customers seeking to rework their plans after the latest extension. Plastic barriers and spread-out seats aim to minimize the risk of spreading the coronavirus. (Photo by Tetsuya Kitayama)

Wedding venues are under pressure to prevent infections.

On Friday morning, two staff members at the Shinagawa Prince Hotel set out disinfectant with each place setting in a banquet room, with plastic barriers between each. The hotel had provided a room that can normally accommodate about 100 people to a party of 20 or so, and placed only five chairs at round tables that typically seat eight, to avoid potentially dangerous crowding.

"We are taking thorough precautions to ensure that people who wish to hold their weddings during the 'June bride' season can do so with peace of mind," a public relations representative said.

The disruption is causing a different sort of heartbreak for many students. May and June -- the period before the start of the worst of Japan's hot, humid summers -- is a prime time for school sports festivals.

A public middle school in Osaka told students' parents and guardians Friday morning that the sports day scheduled for this coming Tuesday would be put on hold. The school had already canceled a senior trip that had been set for late May.

"We wanted to at least hold the sports festival after [the students] had practiced so much for it," a disappointed vice principal said. The school is weighing whether to reschedule the event.

The city's board of education had urged schools to postpone or suspend sports days and school trips during the state of emergency. The extension will force nearly 100 schools to change plans for athletic meets, a representative said.

Expo '70 Commemorative Park in Osaka, which has been closed because of the emergency declaration, had been scheduled to kick off its hydrangea festival this coming Wednesday. But these plans are now up in the air. The annual event draws crowds to see the park's 4,000 hydrangeas in blossom, with more than 130,000 people visiting the park in June 2019.

"A lot of people have been looking forward to it, but we'll consider what to do based on the prefecture's requests and from the standpoint of preventing infection," a representative said.