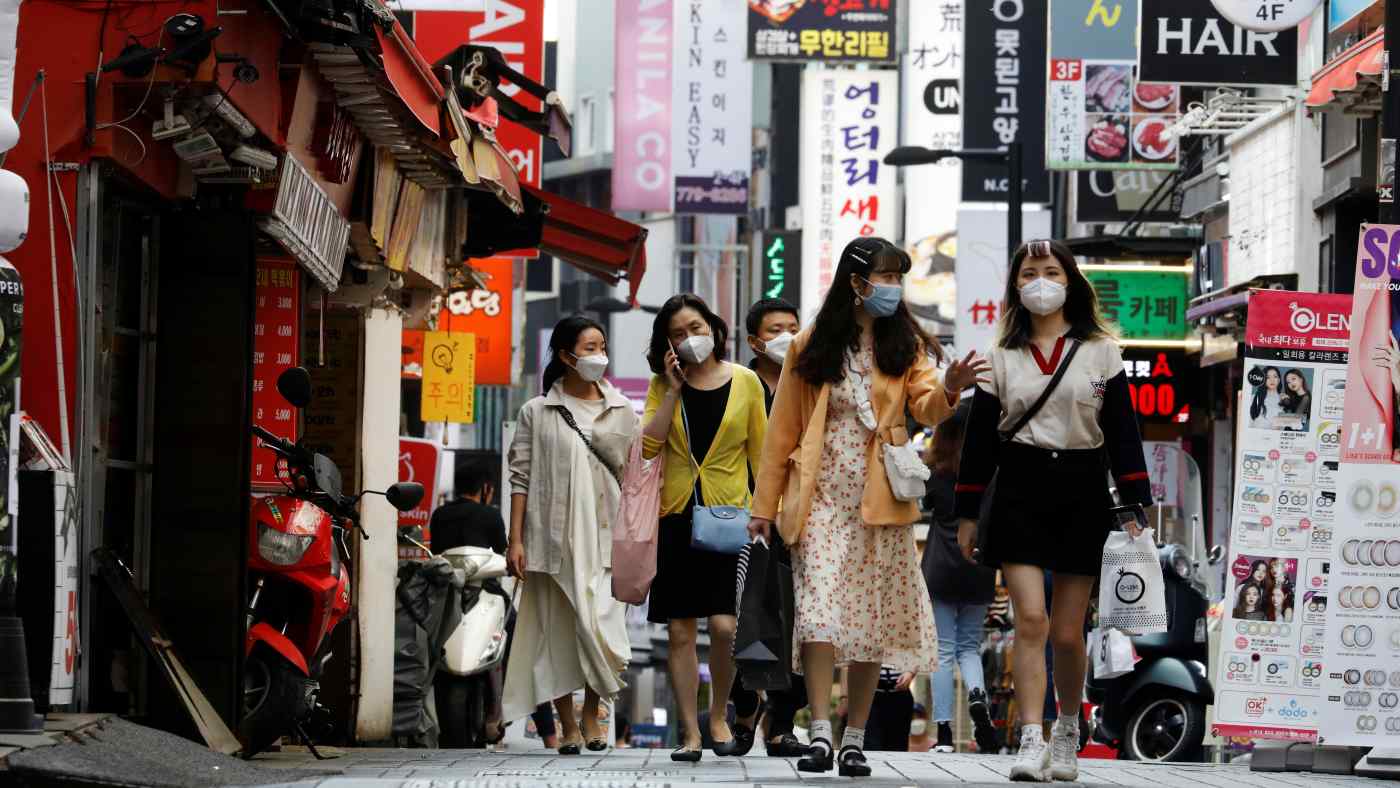 SEOUL -- South Korea was able to disburse relief payments to 97% of all households in about two weeks by using a novel method that offers a lesson to other governments scrambling to rescue economies from the impact of the coronavirus.

The swift process also offers a contrast to that in Japan, where the government in mid-April decided to provide 100,000 yen (about $930) handouts to all residents, many of whom are still waiting for their subsidy.

For a family of four, the emergency payout is 1 million won (around $812), but it comes with a deadline -- the credit must be used by the end of August. The payouts have also been designed to help small business owners.

Because the money cannot be tucked away in savings accounts, some consumers are using it for small luxuries.

At a store in one neighborhood of the capital, customers are coming in to spend their stipends. "I bought a fruit that's a bit pricier than usual," a woman said after using some of her government credit.

The owner of the store seemed relieved, saying sales have increased by 30% after the government implemented this policy.

South Koreans could begin applying for their payouts on May 11 by going to credit card companies' websites. Within two days, points are credited to an applicant's account and can be immediately spent.

Residents can also choose to receive their stipends in the form of gift cards or pre-paid cards, although the majority have chosen to have the payouts deposited into their existing credit card accounts.

When a credit card is used at an eligible store, the transaction is automatically conducted using the government-provided points. The cardholder then receives a mobile text message showing their remaining points.

"[The government] wanted to distribute the payouts as soon as possible, while making sure that the cash would be used to help small to medium-sized businesses," said a source from the Credit Finance Association of Korea. "The credit card industry had all the infrastructure needed to successfully roll out this policy."

For years now South Korea has been using tax deductions to push credit card payments in an attempt to make taxable corporate income more transparent. The credit card expenditure deduction has become one of the largest sources of tax refunds for ordinary taxpayers, according to the Yonhap News Agency.

As a result, cash transactions are now rare in the country, and card companies have built out so much infrastructure that using it for the relief subsidies became a logical choice.

The key to the speedy disbursements, said professor Cho Namjae at Hanyang University in Seoul, was years of digitization efforts. "The government has been investing in digitization for almost 30 years in an effort to overcome the country's slow industrialization," he said. "The long years of investing is now paying off."

While heated friction between the country's conservatives and liberals causes government policies to swing back and forth, digitization, Cho said, "was an issue agreed on by both sides and has long been a national consensus."