SEOUL -- South Korea's Foreign Ministry said Friday it will halt its 90-day tourism visa waivers for Japanese travelers starting Monday, among other measures, hitting back at Tokyo for imposing entry restrictions on South Koreans amid the novel coronavirus outbreak.

The package of measures is roughly equivalent to those announced Thursday by Tokyo, aside from the Japanese side requiring a two-week quarantine for visitors from China and South Korea.

First Vice Foreign Minister Cho Sei-young, who announced the restrictions, made clear that Seoul is acting in response to Japan's measures, which he lamented as being "unilaterally announced without prior consultations or notification."

"We will use an effective quarantine system" to keep any cases entering via Japan on a tight rein, he said.

Visas that have already been issued will be invalidated. All foreign nationals seeking to enter the country from Japan will be allowed in only after providing verified contact information within South Korea.

The ministry also plans to raise its travel advisory level for Japan to level two, calling for people to reconsider travel. Tokyo raised its alert level for all of South Korea on Thursday, expanding the heightened advisory beyond the area around hard-hit Daegu. 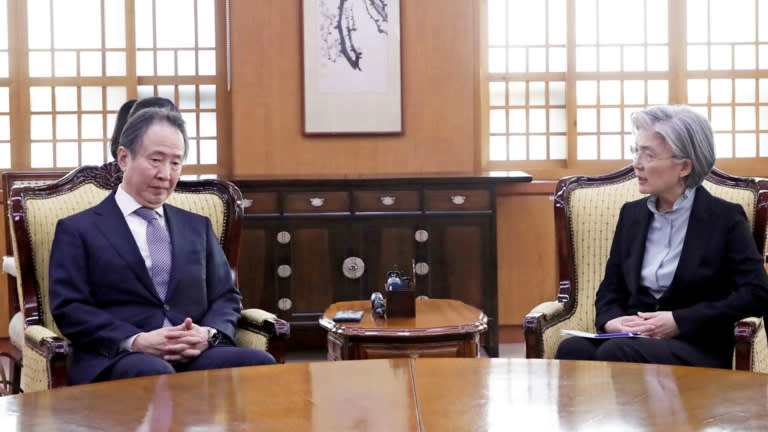 Seoul is considering designating certain airports to handle all flight arrivals from Japan, choosing from among Seoul's Gimpo International Airport, Incheon, Gimhae and Jeju. Tokyo has requested that South Korean and Chinese flights land only at Narita and Kansai airports.

Before the measures were announced, South Korean Foreign Minister Kang Kyung-wha met with Japanese Ambassador Koji Tomita and urged Tokyo to lift its restrictions on South Korean travelers. Otherwise, she said, Seoul would have no choice but to "take necessary countermeasures, including reciprocal measures."

Japan's measures this time "are not only unfriendly but also unscientific, and I strongly urge Japan to promptly retract them while facing the objective facts and situations," Kang said.

Speaking to reporters Friday, Japanese Foreign Minister Toshimitsu Motegi asserted that Japan's measures are "meant to curb the spread of the disease." Tomita explained this to Kang, he said.

Asked Friday about Japan's restrictions on Chinese travelers, Chinese Ministry of Foreign Affairs spokesperson Zhao Lijian said that "as long as the measures are science-based, professional and calibrated and for the sake of safeguarding people’s health and regional and global public health security, we should understand."

Shanghai and Beijing are requiring travelers from Japan, South Korea and other virus hot spots to undergo two-week quarantines, but China has implemented no such measures on a national level.