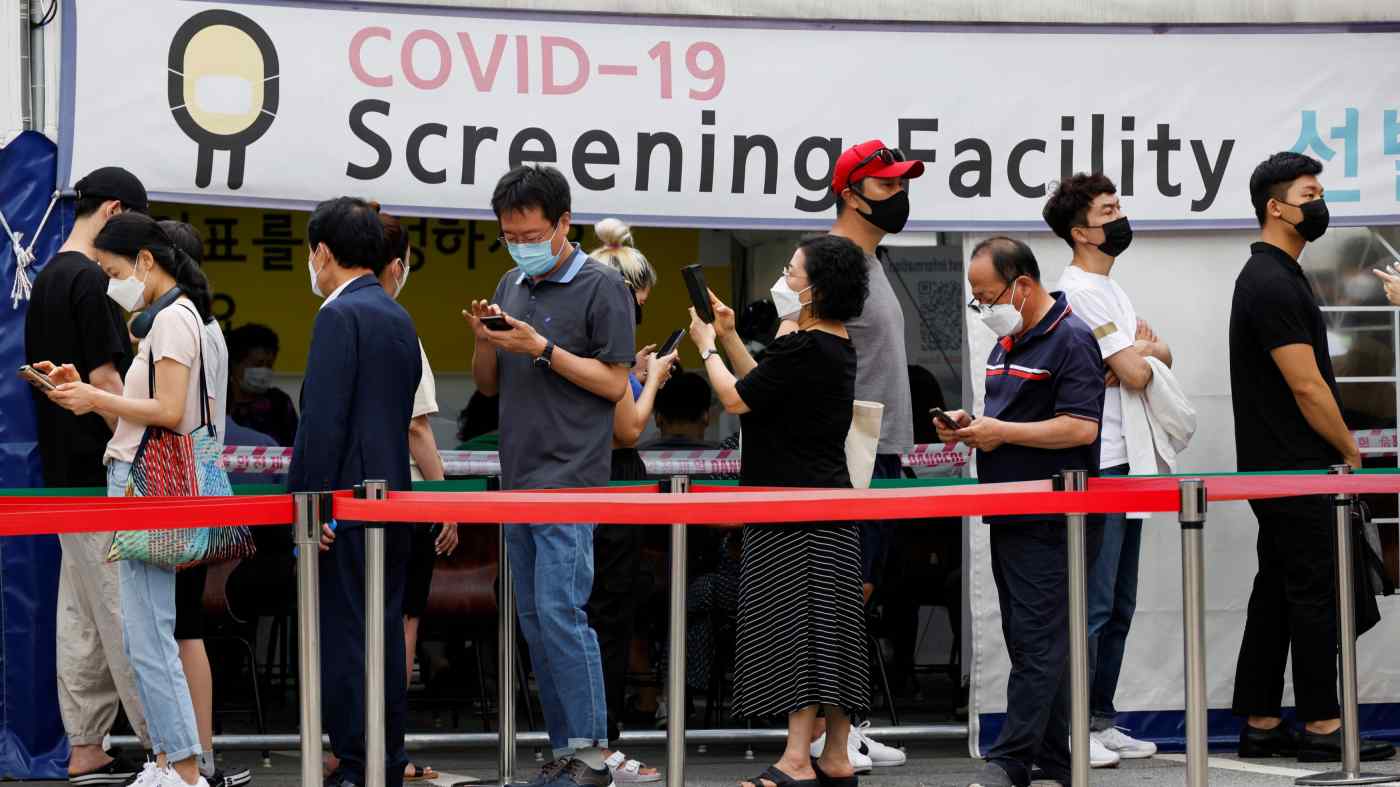 People wait in line for a COVID-19 test at a site temporarily set up at a public health center in Seoul on Friday.   © Reuters
KIM JAEWON, Nikkei staff writerJuly 9, 2021 16:38 JST | South Korea
CopyCopied

SEOUL -- South Korea's tightening of COVID curbs amid a surge in infections is set to undermine its central bank's drive toward rate hikes.

The country will impose its highest level of social distancing rules in greater Seoul for two weeks from Monday, as new cases hit a record high of 1,316 on Friday, up from 1,275 a day earlier. Health authorities said that a nightly curfew will be effective under the Level 4 social distancing regulations in the capital region, banning three or more people from gathering after 6 p.m. in Seoul, Incheon and Gyeonggi Province.

Analysts say that the curbs will slow the BOK's seven-member monetary policy board push to tighten policy -- Gov. Lee Ju-yeol has signaled rates will be raised a few times within this year. The board is expected to keep its key rate unchanged at a record low level of 0.5% at a meeting next Thursday.

"The sudden COVID-19 outbreak will act against the BOK's recent hawkish stance," said Oh Suk-tae, a senior economist at Societe Generale. "A new element of uncertainty has now been introduced given the worsening COVID conditions, which should be the key topic of the July meeting."

Oh said that the fourth coronavirus wave will also dampen domestic demand this summer. Signs of slower economic growth in the second quarter are also not supportive of rate hikes in the near term, he added.

The government declared Thursday that the country had entered its fourth wave of the coronavirus pandemic, with cases in the past week surging 53% compared to the previous three weeks. Health authorities asked people to cancel meetings and stay at home as much as possible.

Schools will shut from Wednesday, and students will be required to take online classes at home. Religious gatherings will also be banned.

Park Jeong-woo, chief South Korea economist at Nomura, said that conditions outside the country are not favorable either. He expects the country's export growth will moderate in the second half of this year, reflecting slowing goods demand from the U.S. and China, South Korea's two biggest trade partners.

Park said that he sees little chance of an increase in the consumption of services in the second half as income growth is stagnant and household debt is increasing.

However, some economists expect that the recent COVID-19 wave will have limited impact on the economy, as the speed of vaccinations are likely to accelerate from mid-to-late July with increased vaccine supply.

"We do not think the delay in easing of social distancing measures would derail the overall recovery of contact consumption and service sector in the second of this year considering hospitalization capacity and vaccination of vulnerable groups," said Yoon Jee-ho, an economist at Citibank. "On our growth outlook, we keep our 2021 GDP growth forecast unchanged at 4.4% with timely fiscal stimulus."

The Finance Ministry announced last week a stimulus package worth 33 trillion won ($28.7 billion), with a plan to give 250,000 won to each person in the country, except to households in the top 20% of income.